Seaworms known as the termites of the sea are attacking what is thought to be the wreck of Captain James Cook’s flagship the HMB Endeavour, leaving timbers honeycombed, according to a marine biologist.

Marine invertebrate expert Reuben Shipway, based in the United Kingdom, noticed the damage as soon as he dived on what remains of the wreck in the murky bottom of Newport Harbour, the Boston Globe is reporting. 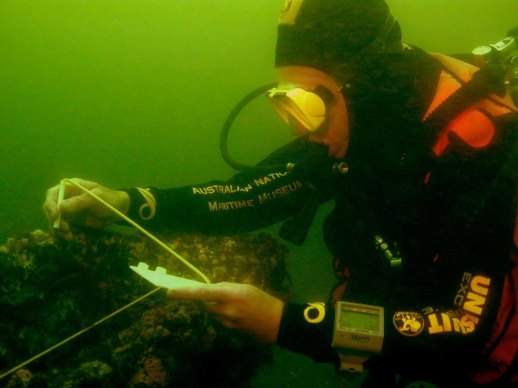 A maritime museum diver at what is believed to be the wreck of HMB Endeavour.

Shipworms had torn through the timber, carving a labyrinth of tunnels leaving what looked like a honeycomb.

Shipway said the exposed pieces of wood on the harbour floor were being eaten from within by a species known as teredo navalis, or naval shipworm. “That damage is ongoing,” he said. “The shipworms’ guts are full of wood.”

He said there was also damage happening from the outside and that he had found evidence that a crustacean species called gribbles had eaten at the wood. About 10 to 15 percent of the ship that may be Endeavour is estimated to remain, the report says. 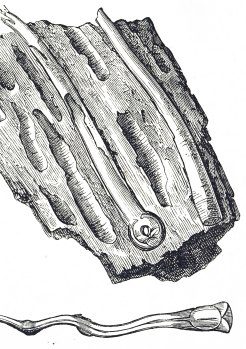 Teredo navalis, the ship-worm, is a species of saltwater clam, a marine bivalve mollusc in the family Tereninidae.Credit:Getty

The report is the latest episode in a stoush between the Australian National Maritime Museum and its research partner, the Rhode Island Maritime Archaeology Project. In February, the Museum’s then chief executive Kevin Sumption said that the wreck was positively identified as the Endeavour. But the Project’s lead researcher, Kathy Abbass, promptly dismissed the claim as a “breach of contract” and “premature”.

She said the jury was still out and that their conclusions would be driven by proper scientific process rather than “Australian emotions or politics”. She is expected to release her findings shortly, possibly this month.

Daryl Karp, the museum’s new director and chief executive, told the Herald last month the museum was now even more confident the wreck was the Endeavour.

Shipway said the wreck was safe from shipworms and gribbles so long as it’s buried under sediment, but it could take just one storm to uncover even more of it.

“Anyone who cares about Endeavour and other shipwrecks needs to come up with resources and
funding for Abbass to protect this and other sites because even if it’s out of sight, it shouldn’t be
out of mind,” Shipway said.

The Australian National Maritime Museum said it was aware of the report in the Boston Globe.

“When the Museum made the announcement regarding the Endeavour, we raised the need for the ongoing protection of the site as a major concern,” it said in a statement.

“There are a number of solutions that could be put in place to protect not only the site of the Endeavour but other important vessels in Newport Harbour.

“We look forward to receiving the report from Dr Abbass and the Rhode Island Marine Archaeology Project.”