Senior Mongols bikie figure Toby Mitchell has been charged after an alleged assault at a licensed venue in Victoria’s north last month.

Victoria Police said the 47-year-old was arrested on Tuesday morning after a November 28 incident in which a man was struck at an Echuca venue. 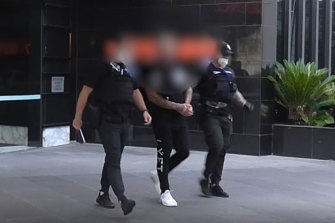 Detectives from the anti-bikie Echo Taskforce on Tuesday charged Mr Mitchell with affray, common assault, unlawful assault and failing to give police the code to his mobile phone.

He was expected to appear in the Melbourne Magistrates Court on Tuesday afternoon.

Echo Taskforce Detective Inspector Graham Banks said Mr Mitchell’s arrest was about “holding people to account for their behaviour, regardless of the situation or circumstances”.

“The Echo Taskforce has a significant commitment to monitoring the behaviour of serious and organised crime groups such as OMCGs [outlaw motorcycle gangs] and where incidents like this occur, we will act,” he said.

“Echo Taskforce investigators will continue to deploy into regional Victoria whenever OMCGs undertake activities which have the potential for this type of violence.”

Police said their investigation into the November incident was ongoing and urged anyone with information about it to contact Crime Stoppers.