Harrowing footage shows shamed racehorse trainer’s ‘terrified’ thoroughbreds being killed at abattoir as its revealed 4,000 racehorses were dispatched to the slaughterhouse since 2019

Harrowing footage has revealed the ‘distressing’ deaths of thousands of former racehorses who are taken for slaughter – sometimes at just two years old.

Some of the sport’s most successful horses were covertly filmed being put down in conditions far from what their previous owners kept them in.

Video taken at Drury and Sons abattoir in England includes the deaths of two horses that belonged to shamed trainer Gordon Elliott, who was suspended from the sport after being pictured sitting on a dead horse.

In a clip from a BBC Panorama investigation that aired tonight, Elliott’s former horses High Expectations and Kiss Me Kayf are seen being offloaded at the English abattoir following tiring road trips from Ireland. 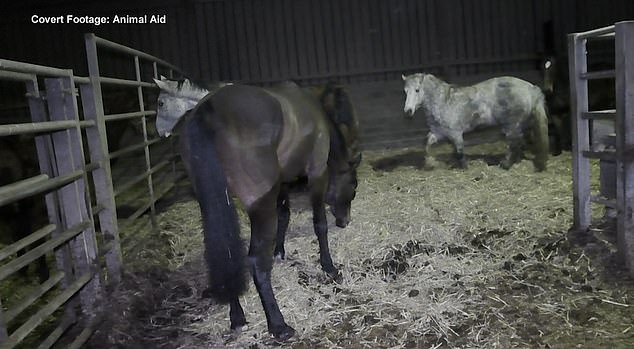 The next day they are seperately taken into a ‘kill room’ before being shot and killed. Experts watching the footage said that the animals were visibly scared.

Campaign group Animal Aid, who placed the hidden cameras in the abattoir and recorded over four days, witnessed the deaths of 261 horses, ponies and thoroughbreds.

Other clips of horses being taken for slaughter however involve several methods that are believed to be in breach of welfare rules, including being shot in front of each other and from a distance.

The animal’s ages ranged from around two to ten years old. The life expectancy of a thoroughbred however can be as long as 25 to 30 years.

It comes after the investigation revealed that at least 4,000 racehorses have been dispatched to the slaughterhouse in Britain and Ireland since 2019.

Three of them, including High Expectations, had been trained by shamed trainer Gordon Elliott, the suspended three-time Grand National winner, at his stables in Ireland. 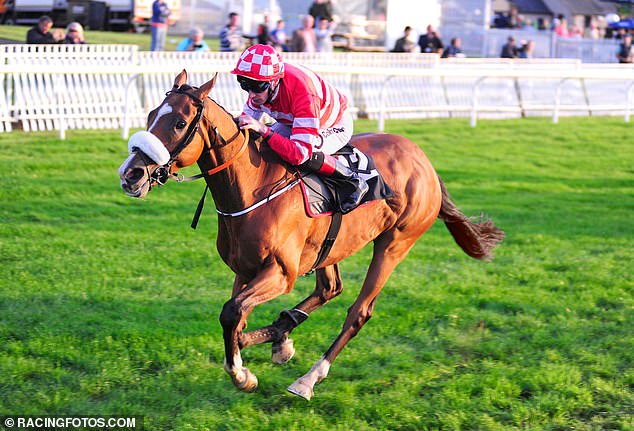 Pictured, race horse High Expectations, who had been trained by shamed trainer Gordon Elliott, the suspended three-time Grand National winner, at his stables in Ireland

Elliott was banned from racing in Britain in March after he was photographed sitting on a dead horse, holding a mobile phone to his ear and making a victory sign.

Dene Stansall, horse racing consultant at Animal Aid – the campaign group which set up hidden cameras at the Drury and Sons abattoir in England for the BBC’s Panorama investigation – said: ‘We wanted to see what was actually happening there. When we looked at the footage, we were absolutely astounded at the sheer volume of young thoroughbreds.’

The covert cameras were filming at the end of 2019 and the start of 2020 and captured dozens of former racehorses, mostly from Ireland, being slaughtered.

Elliott told Panorama the three horses had retired from racing due to injury and were not under his care or ownership when they were killed.

‘None of those animals were sent by me to the abattoir,’ he said.

The investigation found rules meant to protect horses from a cruel death appeared to be ignored at the abattoir. Regulations state every effort should be made to ensure a rapid death and horses should not be killed in sight of each other.

But the footage revealed that on 91 occasions, horses were shot from yards away, and animals were shot together 26 times over four days of filming. After watching the footage, equine expert Professor Daniel Mills said: ‘It doesn’t look like the horse is even stunned. You can see it’s turning its head. It seems to have got some control actually over its head and neck.

‘Taking a shot from a distance at a horse, to me, that’s completely out of order. If you’re going to euthanise a horse, you’ve got to get a bullet in the right place.

‘If that’s representative of how they’re being killed, then we’ve got a really serious problem.’

He added: ‘The regulations are that an animal should not be slaughtered in sight of another.

‘A gunshot going off is going to be startling, seeing another horse suddenly drop, these are all going to be very distressing for a horse in this situation.’

Many of the horses had travelled more than 350 miles by road and sea and were suffering career-ending injuries.

Veterinary expert Dr Hannah Donovan, who also reviewed the footage, told Panorama: ‘The 350 miles potentially carrying an injury is not a humane process. This is unnecessary suffering. 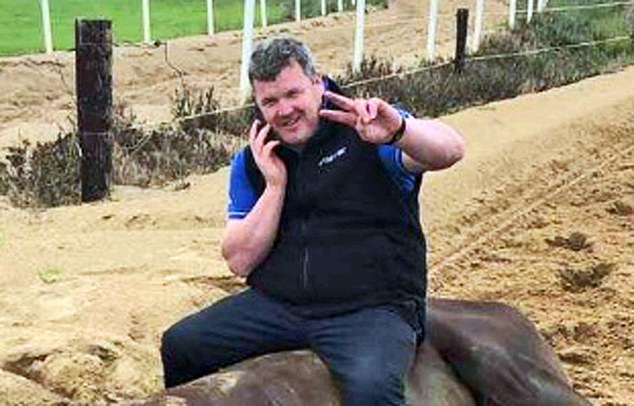 Elliott was banned from racing in Britain in March after he was photographed sitting on a dead horse, holding a mobile phone to his ear and making a victory sign

Drury and Sons said: ‘We take great care to maintain high welfare conditions and do not accept any form of animal abuse. All horses are humanely destroyed and on occasions where issues do occur, we take swift action to review and rectify.’

Horse Racing Ireland said it placed great importance on the welfare of horses in the industry. It did not respond to questions regarding the number of racehorses being slaughtered.

The British Horseracing Authority said it had demonstrated ‘a clear commitment to improving already high standards of care for racehorses… before, during and after racing’.

It added that it would ‘consider carefully any issues raised’.

nPanorama: The Dark Side of Horse Racing, is on BBC One at 8.30pm tonight.