It is 50 years since Hey Hey It’s Saturday first appeared on Australian TV screens. The enormously popular variety show ran for nearly three decades before being axed, then made a brief comeback a decade later. It’s not the show’s anniversary, however, that has given rise to recent public attention.

Three-time Gold Logie winner Daryl Somers, who fronted every episode of Hey Hey, sparked a reckoning of the show’s humour and treatment of its guests when he lamented that political correctness and cancel culture would mean “you probably could not get away with half the stuff you could on Hey Hey now”. 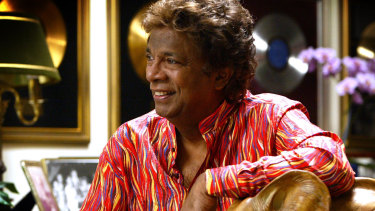 Kamahl has opened up about being humiliated on Hey Hey It’s Saturday.Credit:Danielle Smith

He went on: “Our humour was never meant to offend anybody. It was always about having fun – good, clean fun – and we don’t have a show like that, that is reflecting the fun any more.”

It took little time for one of the show’s most popular and recognisable guests to offer his views on what Somers deemed “good, clean fun”.

Malaysian-born singer Kamahl recounted how, on a number of occasions, he felt humiliated during his appearances on the show, but added: “I didn’t want to raise any objections or protest about it. I kept smiling and pretending all was OK.” It wasn’t. A montage of incidents he is referring to is doing the rounds of social media. It is difficult to watch.

One skit shows him being introduced to the sounds of African drumming and voiceover artist John Blackman, pretending to be from the show’s lighting department, suggesting Kamahl should smile so that the audience could “see him”. He was also hit in the face with white powder while trying to perform, and then told he was now a white man.

Soon after, Somers released a statement acknowledging that some of the material broadcast was “plainly inappropriate” when examined by contemporary standards and that he deeply regrets any hurt experienced by Kamahl.

The singer probably said it best when he spoke to The Guardian: “I don’t think he [Somers] had any ill-feeling towards me. I don’t think he encouraged it, nor stopped it. He was a bystander.” Kamahl is being generous towards Somers but the reality, at the time, was that everyone watching on was a bystander. The majority of those who tuned in most likely considered it “good, clean fun”.

It’s no doubt challenging when such beloved entities from our past are called out for being discriminatory. The recent disclosure by the business that preserves Dr Seuss’ legacy that six of the celebrated author’s books for children will stop being published because of racist and insensitive imagery is a case in point.

“Why are people so unkind?” was the catchphrase most closely associated with Kamahl. It now has a resonance well beyond its original humorous intent. Why were so many of us complicit in what today is so apparently deeply offensive?

It’s a question being asked on many fronts, and not just with a historical lens. How are so many of our political leaders in Canberra complicit in the appalling behaviour that occurs in Parliament House? How are so many workplaces complicit in allowing bullying and discriminatory behaviour?

There are no simple answers, but we must recognise that it’s something we must all confront – in our relationships, our workplaces, and in what we consider entertainment. We can’t alter the past, but we can call it out for what it was. Kamahl should be commended for doing just that.