SIMON WALTERS: The day Rishi Sunak ripped up the truce in Downing Street? 48 hours after Boris Johnson told us to hide away, his neighbour virtually said the opposite. So who IS in charge? 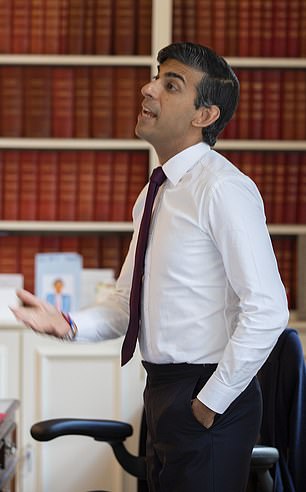 Closing his statement to the Commons on his new Covid jobs-rescue package yesterday, Rishi Sunak defiantly gave us a new slogan: ‘Live Without Fear’

They were the three words which spoke volumes about the rift between the Prime Minister and his Chancellor.

Closing his statement to the Commons on his new Covid jobs-rescue package yesterday, Rishi Sunak defiantly gave us a new slogan: ‘Live Without Fear.’

He was telling us that we have to learn to live with the virus – and stop the country and our benighted economy from total collapse.

It was an approach that could not be in greater contrast to that of the Prime Minister, whose latest draconian coronavirus crackdown will make it harder than ever for Britain to recover from the economic catastrophe caused by the pandemic.

Back in March, when he first got to grips with coronavirus, Mr Johnson also came up with a three-word slogan: ‘Protect the NHS.’

He won public support with that emotive and powerful declaration. At the time, with claims that hospitals faced the catastrophe of having to turn dying Covid patients away, it helped rally a nation terrified of what was then the unknown coronavirus.

But today things are different, and the Prime Minister stands accused of excessive caution, of suffocating the economy and the British people with a cure that is worse than the pandemic itself.

Yesterday, Mr Sunak declared there was another way to deal with the crisis.

Tellingly, Mr Johnson chose not to be at the Chancellor’s side in the Commons yesterday, preferring to visit Northamptonshire Police HQ instead. It was the sort of routine visit prime ministers make on a Friday, when nothing much happens in the Commons.

But yesterday, a lot was happening in the Commons. Perhaps beleaguered Mr Johnson could not bring himself to sit alongside his Downing Street neighbour.

When the 40-year-old political novice was appointed Chancellor seven months ago, he was nicknamed ‘Baby Cino’ (Chancellor in Name Only), reportedly because No 10 thought he was so grateful he got the job he would do what he was told. 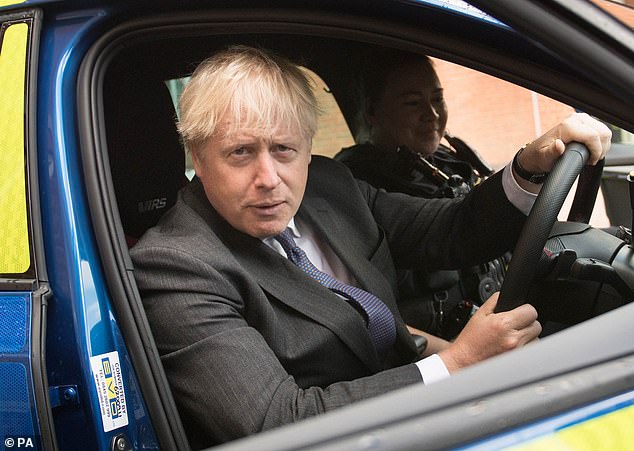 Yesterday, Mr Sunak declared there was another way to deal with the crisis. Tellingly, Mr Johnson chose not to be at the Chancellor’s side in the Commons yesterday, preferring to visit Northamptonshire Police HQ instead

Now ‘Baby Cino’ is calling the shots and – riding high in popularity polls and the estimation of Tory MPs – is seen as most likely to succeed Mr Johnson, who is looking every one of his 56 years.

The statesmanlike style and breathtaking content of Mr Sunak’s Commons statement will do nothing to reduce such speculation.

It could not have been more different to the hollow cod-Churchillian rhetoric of Mr Johnson in a television broadcast on Wednesday.

Don’t go to work, beware soldiers on the streets, don’t stay out after 10pm at night and don’t break the rules or you’ll be fined £10,000, he said, jabbing his finger at millions of viewers.

In short: Live With Fear. Number 10 insisted it had cleared Mr Sunak’s speech in advance, and approved of the last three words.

Some Tory MPs suggested the Prime Minister, shackled by medics and boffins forcing him to play safe, had cleverly ‘licensed’ the Chancellor to act as a proxy for his own libertarian instincts.

The harsh reality, however, is that if it was an act of defiance, such is sinewy Sunak’s burgeoning political muscle, Johnson would not be able to gag him.

With rumours swirling in Westminster – fiercely denied by Downing Street – that Mr Johnson is fed up, hard up, even planning to up stakes and leave No 10 in the new year, Covid has become the focus of a power struggle between two Cabinet factions.

When Mr Johnson was agonising last week over introducing the new six-month coronavirus crackdown, Cabinet Office minister Michael Gove and Health Secretary Matt Hancock urged him to impose a Covid ‘circuit breaker’ including shutting pubs and restaurants for two weeks. They thought they had won him over. 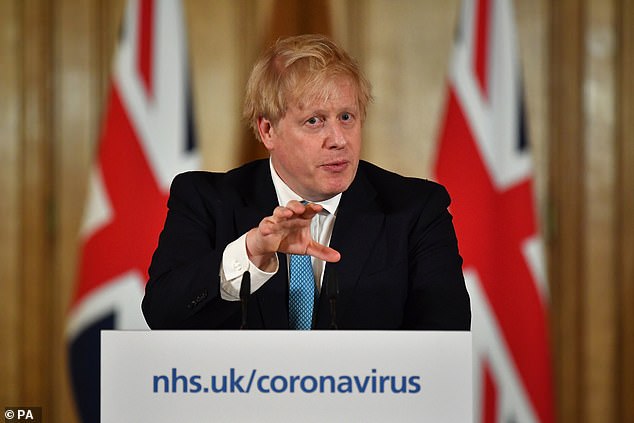 Back in March, when he first got to grips with coronavirus, Mr Johnson also came up with a three-word slogan: ‘Protect the NHS.’ He won public support with that emotive and powerful declaration

But they had reckoned without Mr Sunak. Backed by Home Secretary Priti Patel and Business Secretary Alok Sharma, the Chancellor intervened. He demanded to speak to Mr Johnson and bluntly told him the fiercely ambitious Gove and Hancock were wrong.

Mr Sunak made clear that any new lockdown could lay waste to business and jobs, just when there were signs that the coronavirus-battered economy was picking itself up from the floor.

Mr Johnson was reduced to a political ‘piggy in the middle’, forced to tread a delicate balancing act between the two Cabinet Covid tribes. Although neither Mr Gove nor Mr Hancock are old-fashioned ‘silver spoon’ Tories, they, like Mr Johnson, have treated politics as a ruthless game since their debating days at Oxford.

They have all modelled themselves as post-Thatcher Tories. Sunak, Patel and Sharma, who all have Indian parents who emigrated to Britain, are not ashamed to call themselves Thatcherites.

Mrs Thatcher’s stringent economic policy was shaped by the housekeeping principles she learned living above her father’s shop in Grantham.

Miss Patel was brought up above her parents’ newsagents shop and calls herself a ‘massive Thatcherite’. When he was a schoolboy, maths geek Sunak did the books for his mother’s pharmacy in Southampton.

In a slick piece of political choreography, Mr Sunak showed he is more than a ‘son of Thatcher’ by posing on the steps of No 11 before his Commons statement, flanked by CBI director general Carolyn Fairbairn, and, remarkably, TUC General Secretary Frances O’Grady.

A Tory Chancellor with the respected leaders of both the biggest bosses and union organisations standing at his side, both of them pillars of support.

There have been many calls for a wartime style government of national unity to fight the pandemic. Here was Sunak’s version.

The fact that both those ‘pillars’ are succesful modern women made it all the more striking. In my view, though, it is far too soon to be writing Mr Johnson’s political obituary.

As he faces the burden of making life and death political decisions on Covid affecting millions, and after he also nearly died from the virus, it is understandable that he errs on the side of caution when told the death toll could soar if he fails to act now.

But it was conviction not caution that won buccaneering Mr Johnson the EU referendum, the Tory crown and an election landslide.

Mrs Thatcher was the ultimate ‘conviction’ politician. It won her three elections, though she was respected rather than liked. Mr Johnson’s Achilles heel is that he wants everyone to like him. It is starting to make him look weak. 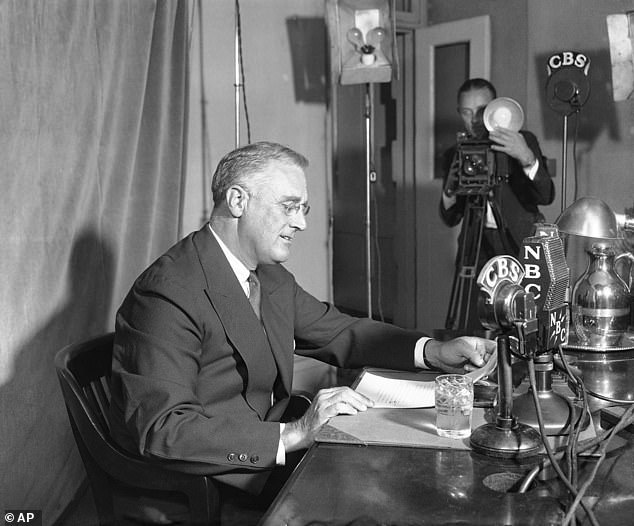 In defending his new package to help workers hit by Covid, Mr Sunak could counter by quoting Churchill’s Second World War ally US President Franklin D Roosevelt. Launching his bold ‘New Deal’ to rescue America from the 1930s depression, Roosevelt said: ‘The only thing we have to fear is fear itself – nameless, unreasoning, unjustified terror which paralyses needed efforts to convert retreat into advance

Hair-shirted Maggie may be turning in her grave at the eye watering cost of Mr Sunak’s coronavirus bail out.

But the Falklands War victor would have no difficulty recognising the political courage in his clarion call to get the economy back on its feet despite the dangers of an inevitable Covid second wave.

Boris Johnson was accused of ‘spouting Churchillian nonsense’ by the founder of the Pret a Manger sandwich chain, Julian Metcalfe.

Launching his bold ‘New Deal’ to rescue America from the 1930s depression, Roosevelt said: ‘The only thing we have to fear is fear itself – nameless, unreasoning, unjustified terror which paralyses needed efforts to convert retreat into advance.’

Boris likes to channel his inner Churchill. Perhaps Dishi Rishi, in his bold ‘Live Without Fear’ response to Covid, was channelling his inner Roosevelt.

09/24/2020 World News Comments Off on SIMON WALTERS: The day Rishi ripped up the truce in Downing Street
Recent Posts