The Met Office has issued a raft of severe weather warnings for snow and ice, with almost the entirety of Britain on alert this weekend. Temperatures are expected to plummet as gale-force winds up to 50mph will smash into the south-east of England late tonight as Storm Darcy hits. The barrelling cold weather system will bring heavy snow and bitter winds, which the Met Office says could cause snowdrifts.

Areas expected to be worse hit by the oncoming storm are largely centred on the coast but include Norfolk, Suffolk, Essex and Kent.

The mercury is forecast to dip to -1C across these areas this night, with sleet beginning from 1am and snow starting in the early hours of Sunday.

Over the course of tomorrow, between 5 and 10cm is expected to fall across the region under the amber warning.

While the Met Office added there was a risk some areas on high ground could even see as much snow as 11.8 inches (30cm of snow). 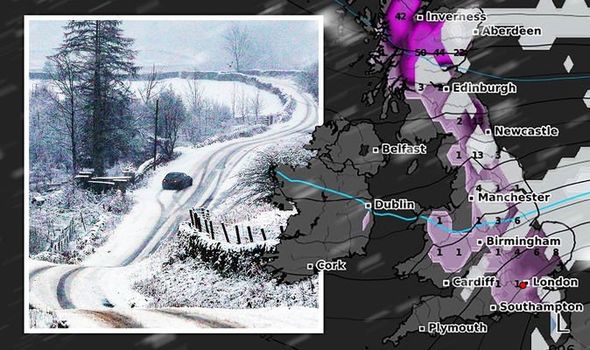 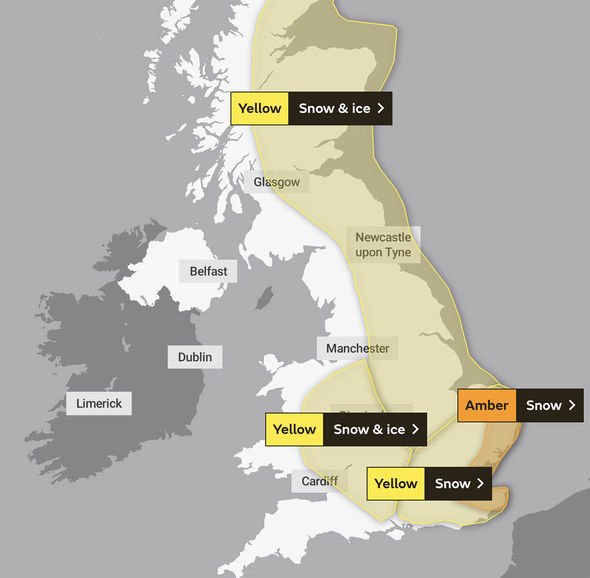 The chilling conditions are being caused by a cold air hitting the UK from the east after descending on Europe from the Arctic Circle,.

The cold weather will form showers that bring snow along with a significant wind chill as it hits this evening.

Met Office weather expert Steven Keates said: “We’ve got some very cold air to the north and east of the UK. It’s been freezing cold across Scandinavia and western Russia for weeks now.”

The BBC Weather Centre said high winds would make it feel colder than it is and could cause the snow to drift.

Based on the latest weather maps, snowdrifts are expected to occur primarily along the north Kent coastline.

A chart from BBC Weather shows the barrage of snow coming in from the west and drift across the south-east in a south-westerly direction.

While the amber alert is confined to areas near the coast, this video – which you can see above – shows the snowfall may drift inland before the system gradually peters out on Sunday evening.

The map shows Kent is expected to be worst hit by the snow in the early hours of Sunday and into about midday.

The Met Office adds these strong easterly winds may “lead to blizzard conditions and blowing and drifting of lying snow at times”. 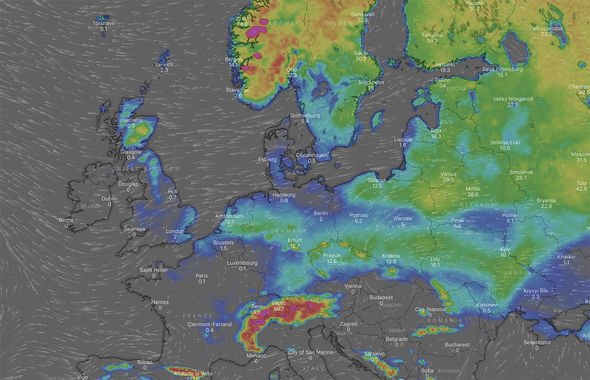 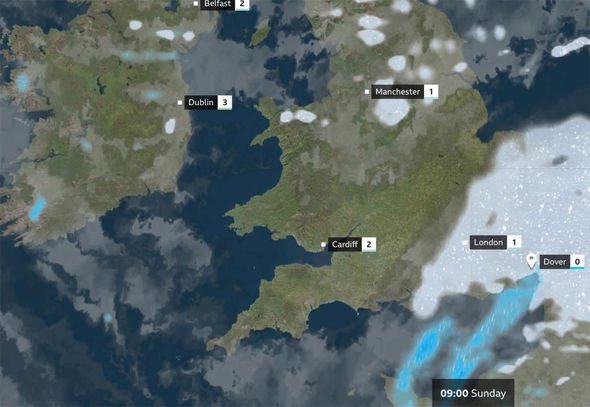 Temperatures will fall as the cold gusts move in, with daytime temperatures staying in low single figures as some places stay below freezing, but the bitter winds will make it feel even colder.

Met Office Chief Meteorologist, Paul Gundersen, said: “The UK is in for a notably cold and snowy period over the next week, with very cold air in place over the whole of the UK by Sunday.

“Showers will see snow accumulating across eastern areas. Within the Amber warning area, more widespread snow is expected and we could see 5-10 cm of snow quite widely, with a chance that a few places could see 20 cm or more.

“With such severe weather around it’s important to keep up to date with the latest forecast.”

The barreling cold air system comes some three years after the UK was hit by the Beast from the East in 2018, which wrought havoc on Britain.

Meteorologist Mr Keates said: “The air mass is not quite as cold as it was then, so it’s not quite as extreme, but nonetheless this is probably the coldest weather we’ll see across the UK as a whole since then.

“And if you’re stepping outside at all through the next few days, it really is going to feel cold.

“Temperatures [will be] barely above freezing on a thermometer, and when you factor in a strong easterly wind you’ll be feeling many degrees below freezing.”