This is the moment a solar powered car began its attempt to become the fastest in the world.

The Nuna Phoenix, of the Vattenfall Solar Team, set off this morning at the National Road Traffic Agency test track in Lelystad, the Netherlands.

Each of the car’s four drivers is expected to be in the vehicle for around three hours, needing to travel at speeds of around 46mph to break the record. 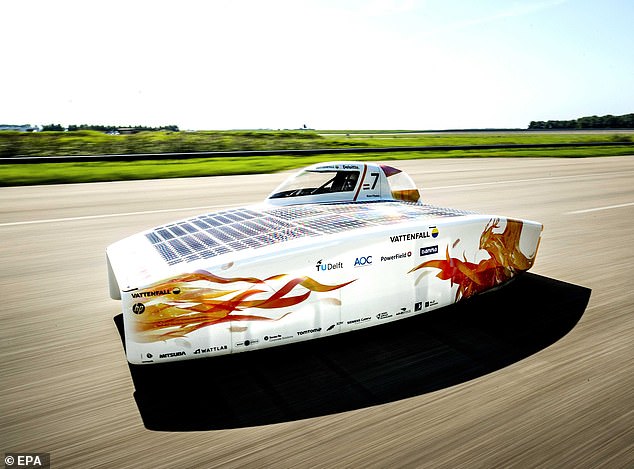 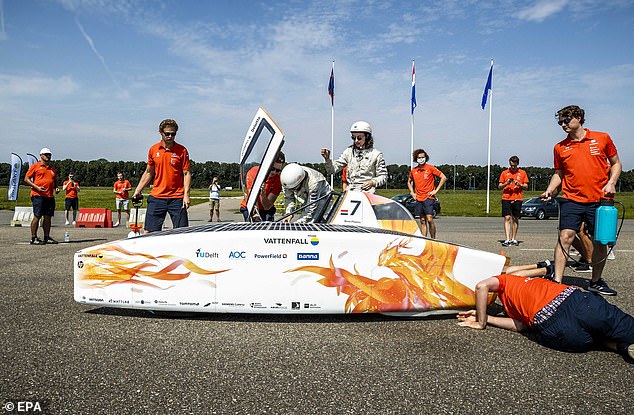 The Vattenfall Solar Team with students from TU Delft, attempting to break the world record with solar car Nuna Phoenix on the test track of the National Road Traffic Agency

It is anticipated the Nuna Phoenix will cross the finish line at 7pm local time, news outlet Sleutelstad reported.

A similar attempt to capture the title in Australia last year went up in smoke after the NunaX burned out during the race.

This year’s race was due to take place in America but was cancelled amid the coronavirus pandemic.

Team leader Niek Hogenboom told Omroepflevoland that he wanted to prove his team was one of the best in the world by ‘driving on nothing but the power of the sun’.

Every two years the team – made ups tudents from the Delft University of Technology design and build a brand new Nuna.

They have won the World Solar Challenge in Australia seven times, most recently in 2017.