Howell Productions, who have been on site to offer Mr Ratcliffe support, wrote on Twitter: “Appalling behaviour this morning in response to the peaceful hunger strike Richard is undertaking!

“Moving barriers to block off the tree of hope and try to scare Richard off! We will not be beaten.”

In a video uploaded to his Twitter outside of the Kensington-based embassy, Mr Khorsandi can be heard shouting “this is not Iran” as he is told not her cannot film outside of the building. 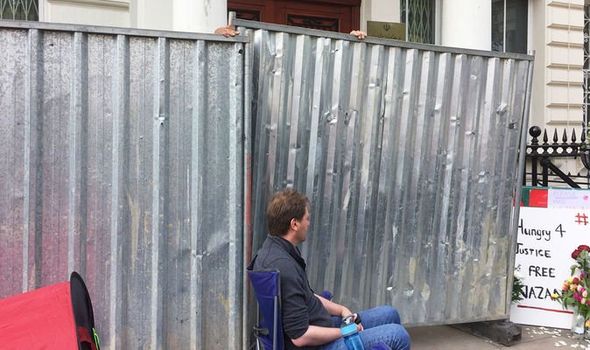 Addressing Jeremy Hunt, Mr Khorsandi said: “Yesterday a metal barrier was erected to distance him from the embassy’s railings.

“These barriers serve no function but to intimidate him and his fellow peaceful protesters – they were extended today to block a wooden ‘tree of hope’.”

Charity worker Nazanin Zaghari-Ratcliffe is currently serving a five-year sentence at Tehran’s notorious Evin prison after being convicted of spying, an accusation she has repeatedly denied.

Ms Zaghari-Ratcliffe was arrested and jailed in 2016 at Imam Khomeini Airport in Tehran as she tried to board a plane back to the UK with her daughter.

Mr Ratcliffe told BBC News: “It has gone on long enough and it is time for her to be released. Beyond that, the immediate thing is one of the demands we had is for the British ambassador to be able to go and visit her and make sure she is ok.

“Thirdly, if she is not going to be released then I’d like to be able to get a visa to go to Iran to see Nazanin, to see Gabriella and just after all this time to see how they are doing.”

Mr Ratcliffe said the police have been telephoned multiple times by the embassy to make sure the protesters were not on the steps of the building, nor touching the fence.

The Iran embassy have alleged the fences were put in place to prepare to pain the railings.