Surfin’ bird: Heron glides along the surface of a river after it hitches a ride on a hippo

A crafty heron found an ingenious way to ‘surf’ with minimal effort – by standing on a swimming hippo’s back.

Heinrich Gericke was on a safari holiday with his family in Kruger National Park, South Africa, on October 22 when he saw the unusual sight in the water.

While the family pulled up to a dam to watch the elephants, the 42-year-old labour consultant spotted a heron hitching a ride on a hippo’s back. 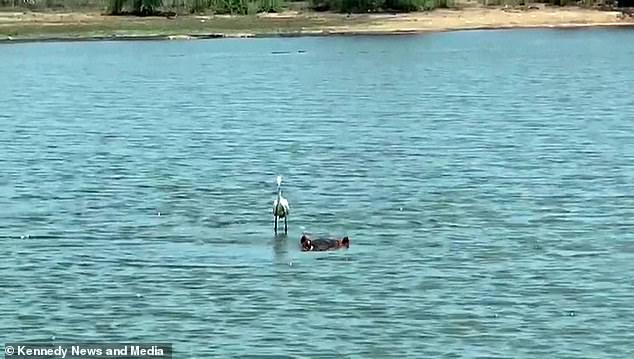 The heron can be seen ‘surfing’ on the hippo’s back

As the hippo emerged from the water for only a moment, the heron was comfortably standing on its back.

As Heinrich, from Johannesburg, South Africa, looked closer, the bird had the appearance that it was walking on water.

In amusing footage, the hippo’s whole head disappears into the dam and it begins to swim off out of sight.

Still stood on its back, the heron looks completely serene as it glides through the water, keeping its balance perfectly like an expert surfer.

Heinrich, who filmed the clip at the Kruger’s Lower Sabie Camp, said: ‘I couldn’t believe my eyes, the heron really looked like it was surfing. 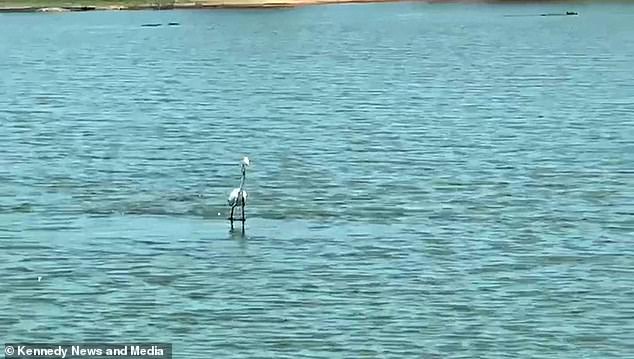 ‘All I could think of was The Beach Boys song ‘Surfin’ USA’ playing behind it.

‘When I started filming I had no idea what was going to happen. The hippo just looked completely oblivious to what the bird was doing.

‘I just thought the heron was sitting there but then the hippo took off and I could see it had been planning this journey all along.

‘I’ve never seen anything like it before but it was a really good idea. We were camping on holiday for a fortnight and this was one of the funniest things we saw.’

When Heinrich uploaded to Facebook, people were quick to point out the heron’s surfing abilities and how easy it made it look.

One commenter said: ‘I wonder if they fall off the first few times? Do they have to practice to make hippo surfing look so effortless?’

Another person commented: ‘What a way to surf without waves and wind, great idea. Smart heron.’

11/13/2020 World News Comments Off on Surfin' bird: Heron hitches a ride on a hippo
Recent Posts
We and our partners use cookies on this site to improve our service, perform analytics, personalize advertising, measure advertising performance, and remember website preferences.Ok