Ring the dinner bell! Swans teach their cygnet to pull a string and sound a chime to request food in centuries-old tradition

A pair of swans have taught their adorable cynget how to ring a bell to call for food in Somerset.

Parents Grace and Gabriel live in Bishop’s Palace moat in Wells and welcomed baby Lucky back in July.

For the past month they have shown the youngster the ropes, carefully swimming up to the dangling string and taking it in their beaks before giving it a tug.

On Monday afternoon little Lucky, who is still grey and fluffy, was spotted ringing the bell by himself. 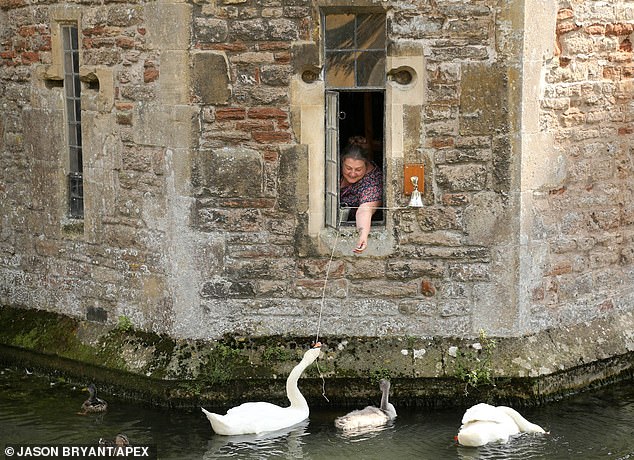 Swans Grace and Gabriel have taught their cynget Lucky, pictured together, to ring a bell for food in Bishop’s Palace moat in Wells, Somerset 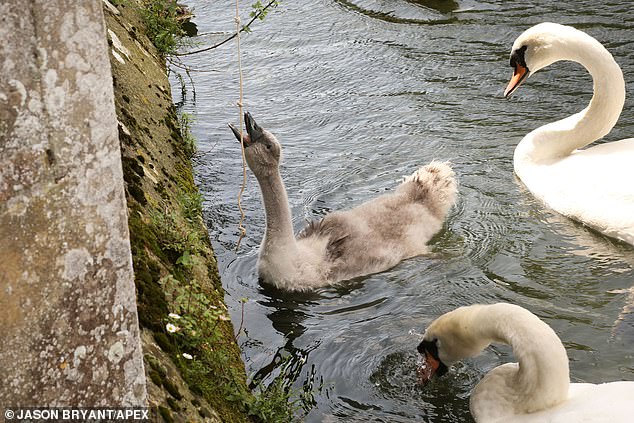 On Monday afternoon Lucky managed to ring the bell clearly, pictured, as his parents watched

The tradition of swans at The Bishop’s Palace goes back to 1870s when a Bishop’s daughter taught the swans to ring a bell at the Gatehouse for food.

There are two locations on the moat that the swans can use when they’re feeling a little peckish, reports the Palace.

Lucky was one of four eggs but unfortunately the other three did not hatch back in July.

In the past fortnight Lucky’s confidence with using the bell has grown, and he’s been spotted giving it a try under the watchful eyes of his parents several times.

Moira Anderson, Administrator at the Palace, runs a web page dedicated to keeping people updated on the swans.

On August 5 she revealed: ‘Lucky is also gaining confidence by the bell, and following Gabriel’s example but grabbing the bottom of the bell rope. 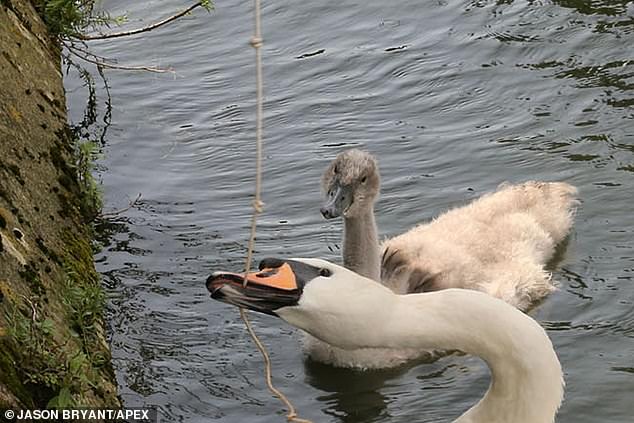 Swans ringing bells has been a tradition at The Bishop’s Palace since the 1870s. Before Grace, Gabriel and Lucky moved in birds Bryn and Wynn swam in the moat Grace and Gabriel, pictured with their cynget, were rescued from Swan Rescue South Wales and little Lucky arrived in July. He was one of four eggs but the others din’t hatch

‘Too little to actually make much of a sound with the bell at the moment but we are encouraging Lucky to keep going.’

And just a week later she posted: ‘Lucky is making real progress with the bell – visitors and staff have heard him make a proper ringing sound!’

Before Gabriel and Grace moved into the moat swans Bryn and Wynn had been the resident bell ringers.

Bryn died in April 2018 and Wynn left from the moat with her four remaining cygnets in October 2018.

Grace and Gabriel were rescued from Swan Rescue South Wales.

08/21/2019 World News Comments Off on Swans teach cygnet to pull a string and sound a chime to request food
Recent Posts
We and our partners use cookies on this site to improve our service, perform analytics, personalize advertising, measure advertising performance, and remember website preferences.Ok