Two weeks after they were due to ring in the new year for Melbourne, 350 drones will buzz into the city sky to create colourful light displays across Victoria Harbour this weekend.

Lord mayor Sally Capp confirmed on Wednesday that Docklands’ drone swarm would make its debut on Saturday night after show organisers secured an accreditation from the Civil Aviation Safety Authority. 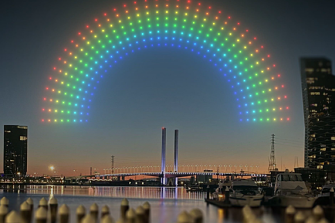 Melbourne’s night sky will be illuminated by hundreds of drones.

British firm Celestial had struggled to get key equipment such as batteries shipped to Australia in the lead-up to New Year’s Eve, preventing the team from carrying out crucial training and test flights before the celebrations and leaving the City of Melbourne with no choice but to cancel the show. COVID-19 isolation stints also contributed to the delay.

“While the cancellation of the New Year’s Eve drone event was disappointing, we can’t wait to stun crowds and support local businesses with this breathtaking display throughout January,” Cr Capp said. 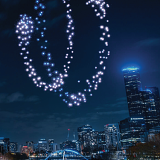 The show will be held twice-nightly until January 30.

The display will feature 350 drones that will work together to create images of Melbourne, accompanied by custom-written messages, including a piece by Victorian poet Ren Alessandra, and a composition by Indigenous artist Mandy Nicholson.

The event is free to attend and, unlike in the entertainment precincts on New Year’s Eve, does not require people to book tickets in advance.

Celestial co-founder and chief executive Tony Martin said that despite the initial logistic woes, the team had all the equipment they needed to deliver the show in Melbourne.

“We are incredibly excited to be delivering another landmark show that pulls together so many creative threads. The end result will be like nothing seen in Australia,” he said.

“We want to create a world-class team to mirror the huge talents in our UK team. We see Melbourne as home from home and essential to our southern hemisphere business going forward.”

The eight-minute show, best seen from Harbour Esplanade, will be held twice-nightly until January 30. The first session will start at 9.30pm, followed by a show at 10.30pm, weather conditions permitting.

Cr Capp said Docklands was the ideal space to deliver the event safely, and she reminded people to wear a mask and keep their distance from others.

“This is an entirely free event, and I would encourage everyone to book a local venue or sit along the harbour and enjoy the show,” she said.

The City of Melbourne recommends spectators be fully vaccinated and wear a face mask outdoors where physical distancing cannot take place. Those with COVID-19 symptoms or awaiting a test result should stay home.

The event, slated to become Australia’s largest drone show, was funded through the $100 million Melbourne City Recovery Fund, a partnership between the council and the state government to inject life back into the CBD.