Taiwanese authorities have suggested that China is to blame for blocking a deal for Taiwan to buy five million doses of a Covid-19 vaccine developed by a German firm.

Taiwan’s health minister said on Wednesday that the island’s plans to purchase the coronavirus vaccine, BioNTech SE, are now on hold, citing potential political pressure from Beijing for the delay.

The announcement comes at a time that tensions between the two sides have reached boiling point in recent months as they clashed over a range of issues including territorial disputes, the pandemic and human rights. 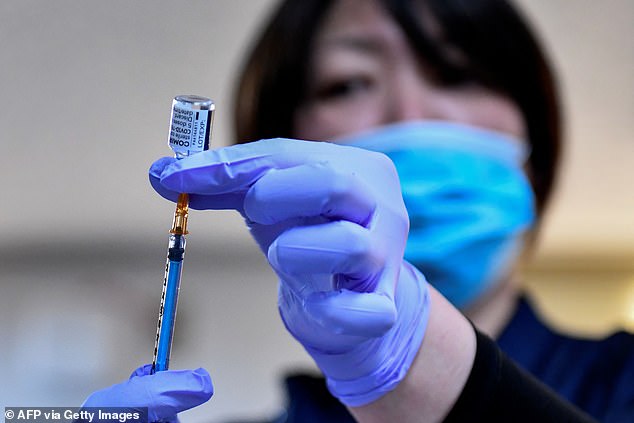 Taiwan’s health minister said on Wednesday that the island’s plans to purchase the coronavirus vaccine, BioNTech SE, are now on hold, citing potential political pressure from Beijing. In this file photo, a medical worker fills a syringe with a dose of the Pfizer-BioNTech Covid-19 vaccine

China, which claims Taiwan as its own territory, has repeatedly sparred with the self-ruled island over the coronavirus pandemic.

Taiwan has been angered by China’s assertion only it can speak for the island on the international stage about the subject, while Taiwan has accused China of lack of transparency.

Taiwan announced late in December said it had agreed to buy almost 20 million doses of Covid-19 vaccine, including 10 million from UK drugmaker AstraZeneca, with the rest coming from the COVAX global vaccine programme and an unnamed company.

On Wednesday, Taiwan’s Health Minister Chen Shih-chung said officials were on the verge of announcing the vaccine deal with BioNTech in December when the German firm pulled the plug.

While he did not directly say China was to blame, Chen implied there was a political dimension to the decision and that he had been worried about ‘outside forces intervening’, hence his caution in discussing the planned deal publicly.

‘Certain people don’t want Taiwan to be too happy,’ he added, without elaborating, in a radio interview. 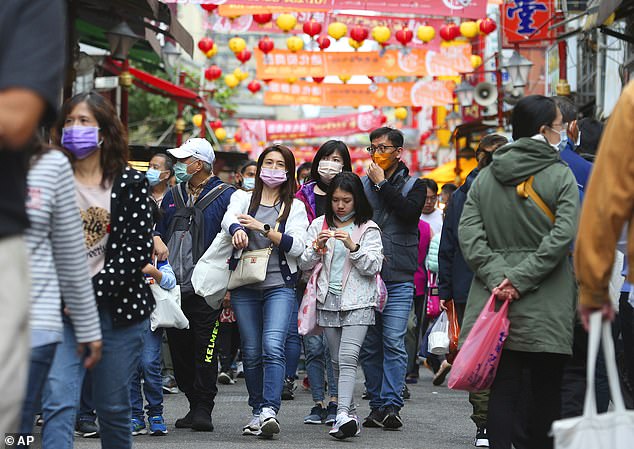 China, which claims Taiwan as its own territory, has repeatedly sparred with the self-ruled island over the coronavirus pandemic. In this file photo, people are pictured shopping for the Lunar Near Year at the Dihua Street market in Taipei, Taiwan, on February 10

BioNTech’s development and distribution partner for the rest of the world is US firm Pfizer Inc.

Taiwan’s remark comes at a time of rising tensions between the two sides, with Beijing ramping up diplomatic and military pressure since the 2016 election of Taiwanese President Tsai Ing-wen.

Tsai hails from a party that sees Taiwan as a de facto sovereign nation and not part of ‘one China’.

Last year Chinese military jets made a record 380 incursions into Taiwan’s defence zone, with some analysts warning that tensions between the two sides were at their highest since the mid-1990s.