Taipei: Taiwan will more than double the number of people who have to quarantine at home to more than 5000 as it seeks to contain a rare domestic cluster of COVID-19 connected to a hospital, the health minister said.

While Taiwan has kept the pandemic well under control thanks to early and effective prevention, with the large majority of its 890 infections imported cases, it has since January 12 been dealing with a small number of domestic transmissions at a hospital. 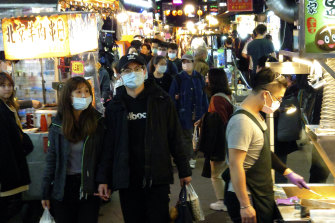 People wear face masks to protect against the spread of the coronavirus and visit at a night market in Taipei, Taiwan. Credit:AP

While the 15 people infected so far at the hospital in the northern city of Taoyuan is small compared to many other parts of the world, it has unnerved the government, which has cancelled many large-scale events related to the upcoming Lunar New Year.

Health Minister Chen Shih-chung told reporters on Sunday that they will expand the number of people who have to quarantine at home for 14 days who may have had contact with the infected patients from the hospital cluster.

He put the number at about 5000 people, compared to around 1300 who are currently in quarantine.

The government has been testing all of those who have been in quarantine, and has been announcing new cases among them as they are confirmed.

Taiwan has a well-honed system to track those who have been in contact with confirmed cases and an electronic monitoring network to ensure those in quarantine remain at home.

Despite the new infections, Taiwan only has 95 active cases being treated in hospital. The government holds news conferences to announce details of every new infection.