Afghanistan’s Taliban-run administration on Saturday ordered all local and foreign non-governmental organisations (NGO) to stop female employees from coming to work, according to an economy ministry letter.

The letter, confirmed by economy ministry spokesperson Abdulrahman Habib, said the female employees were not allowed to work until further notice because some had not adhered to the administration’s interpretation of Islamic dresscode for women.

It comes days after the Taliban-run administration ordered universities to close to women, prompting strong global condemnation and sparking some protests and heavy criticism inside Afghanistan.

The Charge D’Affaires for Norway, which funds aid in Afghanistan and hosted talks between Taliban and civil society members in January, condemned the move. 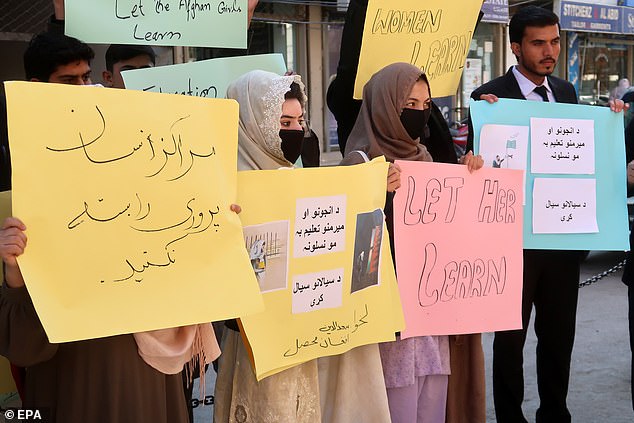 Pictured: Afghan refugees in Pakistan hold placards during a protest as they demand the Taliban government to allow education for girls, in Quetta, the provincial capital of Balochistan province, Pakistan on December 24, 2022. 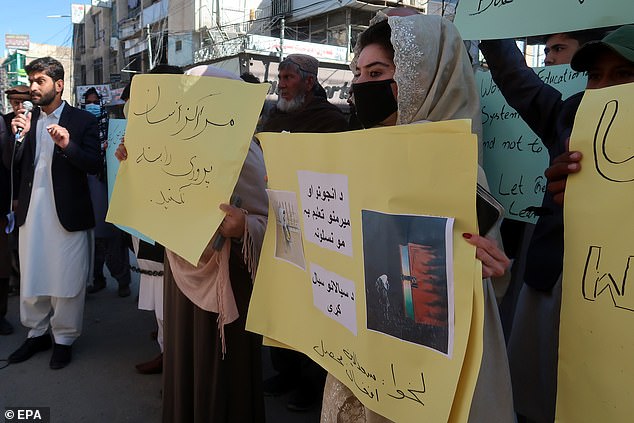 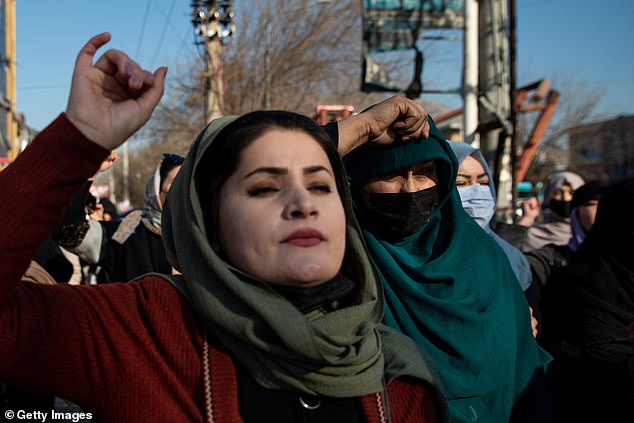 ‘The ban on female employees in NGOs must be reversed immediately,’ Paul Klouman Bekken tweeted.

‘In addition to being a blow to women’s rights, this move will exacerbate the humanitarian crisis and hurt the most vulnerable Afghans.’

It was not immediately clear how the order would affect United Nations agencies, which have a large presence in Afghanistan delivering services amid the country’s humanitarian crisis.

When asked whether the rules included U.N. agencies, Habib said the letter applied to organisations under Afghanistan’s coordinating body for humanitarian organisations, known as ACBAR.

That body does not include the United Nations, but includes over 180 local and international NGOs.

However, the United Nations often contracts with NGOs registered in Afghanistan to carry out its humanitarian work.

Dozens of national and international NGOs continue to work in several sectors across remote areas of Afghanistan, and many of their employees are women.

Afghanistan’s already struggling economy has tipped into crisis since the Taliban took over in 2021, with the country facing sanctions and cuts in development aid.

Humanitarian aid, aimed at meeting urgent needs, has provided a lifeline to millions of people. Over half of Afghanistan’s population are reliant on humanitarian aid, according to the International Rescue working after ‘serious complaints’ about their dress code, the Ministry of Economy told AFP on Saturday. 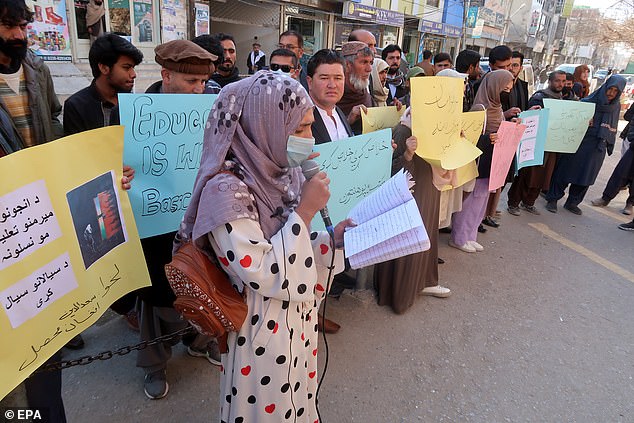 Pictured: Afghan refugees in Pakistan hold placards during a protest as they demand the Taliban government to allow education for girls, in Quetta, the provincial capital of Balochistan province, Pakistan, on December 24, 2022. 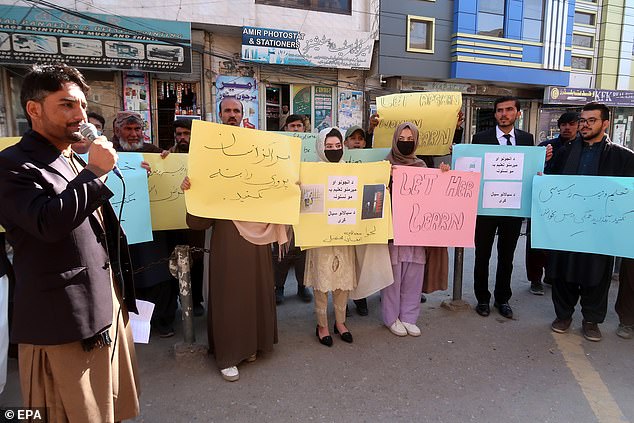 Pictured: Afghan refugees in Pakistan hold placards during a protest as they demand the Taliban government to allow education for girls, in Quetta, the provincial capital of Balochistan province, Pakistan on December 24, 2022

The order threatened to suspend the operating licences of NGOs that failed to implement the directive.

While the Taliban had promised a softer form of rule when they returned to power in August last year, they have instead imposed harsh restrictions on women – effectively squeezing them out of public life.

‘There have been serious complaints regarding the non-observance of the Islamic hijab and other rules and regulations pertaining to the work of females in national and international organisations,’ said a notification sent to all NGOs, a copy of which was obtained by AFP and confirmed by a spokesman for the ministry of economy.

‘The ministry of economy … instructs all organisations to stop females working until further notice,’ the notification said.

‘In case of negligence of the above directive, the license of the organisation which has been issued by this ministry, will be cancelled,’ it added.

Two international NGOs confirmed that they had received the notification.

‘We are suspending all our activities from Sunday,’ a top official at an international NGO involved in humanitarian work told AFP on condition of anonymity.

‘We will soon have a meeting of top officials of all NGOs to decide how to handle this issue.’

Meanwhile, Taliban security forces have used a water cannon to disperse crowds protesting against the ban on university education for women, witnesses said, as the decision by the government continued to cause anger in Afghanistan and other countries around the world.

After Afghanistan’s Taliban rulers banned female students from attending universities, effective immediately on Tuesday, women have since demonstrated in major cities in a rare sign of domestic protest since the Taliban seized power last year. 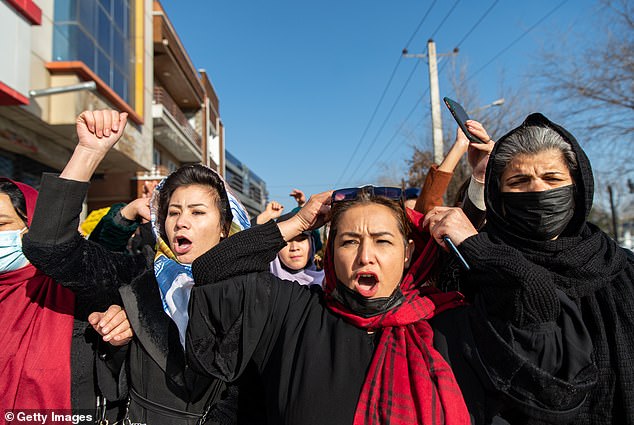 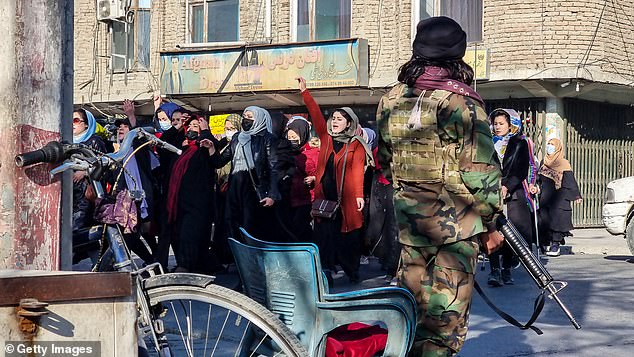 According to witnesses in the western city of Herat, about two dozen women were heading to the provincial governor’s house on Saturday to protest against the ban, chanting: ‘Education is our right,’ when they were pushed back by security forces firing the water cannon.

Video shared with the Associated Press shows the women screaming and hiding in a side street to escape the water cannon. They then resume their protest, with chants of ‘Disgraceful!’

One of the protest organisers, Maryam, said between 100 and 150 women took part in the protest, moving in small groups from different parts of the city toward a central meeting point. She did not give her last name for fear of reprisals.

‘There was security on every street, every square, armoured vehicles and armed men,’ she said.

‘When we started our protest, in Tariqi Park, the Taliban took branches from the trees and beat us. But we continued our protest. They increased their security presence. Around 11am they brought out the water cannon.’

A spokesman for the provincial governor, Hamidullah Mutawakil, claimed there were only four or five protesters. ‘They had no agenda, they just came here to make a film,’ he said, without mentioning the violence against the women or the use of the water cannon.

There has been widespread international condemnation of the university ban, including from Muslim-majority countries such as Saudi Arabia, Turkey, the United Arab Emirates and Qatar, as well as warnings from the US and the G7 that the policy will have consequences for the Taliban. 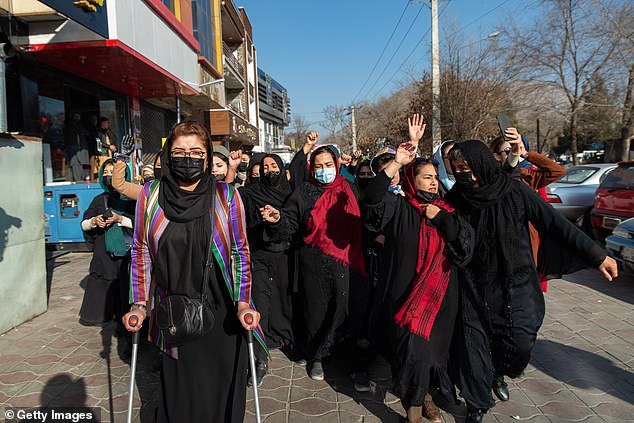 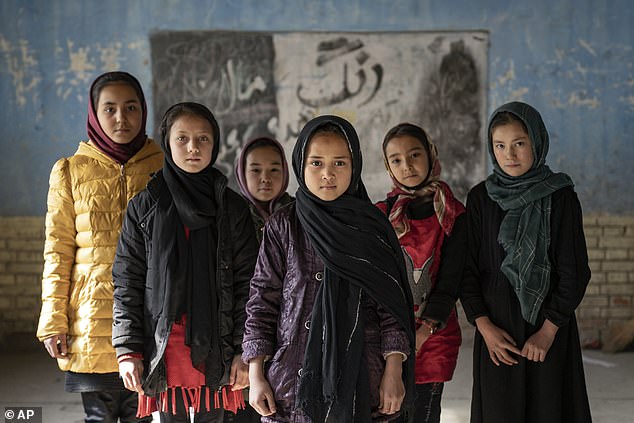 Pictured: Afghan schoolgirls pose for a photo in a classroom in Kabul on Thursday, Dec. 22, 2022. The country’s Taliban rulers earlier this week ordered women nationwide to stop attending private and public universities effective immediately and until further notice

An official in the Taliban government, minister of higher education Nida Mohammad Nadim, spoke about the ban for the first time on Thursday in an interview with Afghan state television.

He said the ban was necessary to prevent the mixing of genders in universities and because some subjects being taught violated the principles of Islam.

He said the ban would be in place until further notice.

Despite initially promising a more moderate rule respecting rights for women and minorities, the Taliban have widely implemented their interpretation of Islamic law, or Sharia, since they seized power in August 2021.

Afghan society, while largely traditional, had increasingly embraced the education of girls and women over the past two decades.

The Taliban have banned girls from middle school and high school, barred women from most fields of employment and ordered them to wear head-to-toe clothing in public. Women are also banned from parks and gyms.

The Taliban have pushed women out of many government jobs, prevented from travelling without a male relative and ordered to cover up outside of the home, ideally with a burqa.

They have also resumed public floggings of men and women in recent weeks, widening their implementation of an extreme interpretation of Islamic law.

Also on Saturday, in the south-western Pakistani city of Quetta, dozens of Afghan refugee students protested against the ban on female higher education in their homeland and demanded the immediate reopening of campuses for women.

One of them, Bibi Haseena, read a poem depicting the grim situation for Afghan girls seeking an education. She said was unhappy about graduating outside her country when hundreds of thousands of Afghan women and girls were being deprived of an education.