Sydney’s north shore is a long way from Beijing’s Tiananmen Square, but the 1989 massacre was a more prominent talking point in my household than most.

I was five years old in 1992 when a woman called Xiao-xing responded to a job ad my mum placed with Sydney University looking for an au pair to come and live with our family of five. 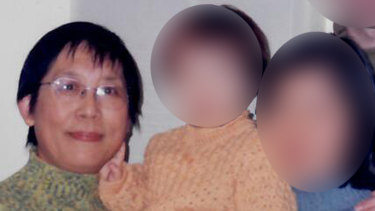 Xiao-xing is seen with Faith (face obscured, right) and a child.

I don’t recall when the decision was made that the twentysomething Faith would move into a room in my grandmother’s house down the street from us, but I was rapt to have a violin-playing Chinese idol to follow around.

(As a teenager, I would hear that Faith initially came to stay as an emergency stopgap after a nightmare stint in a share house fending off nightly advances from an older male flatmate.)

But if I was happy, Xiao-xing was more content to have Faith nearby, even if the only contact they appeared to have was their ferry ride together each day to uni.

Xiao-xing returned to China in 1993, a move which puzzled my parents, who struggled to understand why she wouldn’t stay on the six weeks longer it would take to graduate. But she didn’t seem to care.

Faith stayed on at my grandmother’s. If the young student was sad to see her older compatriot go, she never let on.

In the years after Xiao-xing left, Faith would tell us about her life back in China, how her own mother was disliked by the government, how she wasn’t allowed to join her family on the streets to celebrate Chinese New Year, and how she had even been forced to wear a placard once.

Faith continued living with my grandmother for around five years before moving to Melbourne, where she retrained as a nurse and eventually married an Australian.

More than two decades later I was working as a reporter when my colleague John Garnaut reported on a Chinese plan to send out loyal party members to Australia to keep tabs on Chinese students living here in the early 1990s.

I still wonder whether we were unwittingly caught up in the plan.

* Not her real name