El Paso: A legal team that recently interviewed over 60 children at a Border Patrol station in Texas says a traumatic and dangerous situation is unfolding for some 250 infants, children and teens locked up for up to 27 days without adequate food, water and sanitation. 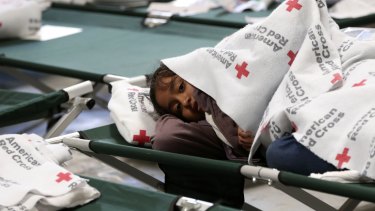 A young girl keeps warm under her blanket at the new Casa del Refugiado in east El Paso, Texas.Credit:AP

A team of attorneys who recently visited the facility near El Paso told The Associated Press that three girls, ages 10 to 15, said they had been taking turns keeping watch over a sick 2-year-old boy because there was no one else to look after him.

When the lawyers saw the 2-year-old boy, he wasn't wearing a diaper and had wet his pants, and his shirt was smeared in mucus. They said at least 15 children at the facility had the flu, and some were kept in medical quarantine.

Children told lawyers that they were fed uncooked frozen food or rice and had gone weeks without bathing or a clean change of clothes at the facility in Clint, in the desert scrubland some 40 km southeast of El Paso.

"In my 22 years of doing visits with children in detention I have never heard of this level of inhumanity," said Holly Cooper, an attorney who represents detained youth.

"Seeing our country at this crucible moment where we have forsaken children and failed to see them as human is hopefully a wake up for this country to move toward change." 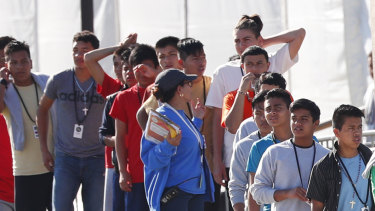 Children at the Homestead Temporary Shelter for Unaccompanied Children in Homestead, Florida. Credit:AP

The lawyers visited the facility in Clint because they are involved in a legal settlement known as the Flores agreement that governs detention conditions for migrant children and families.

The lawyers negotiated access to the facility with officials, and say Border Patrol knew the dates of their visit three weeks in advance.

Many children the lawyers interviewed had arrived alone at the US-Mexico border, but some of the kids had been separated from adult caregivers such as aunts and uncles, the attorneys said. 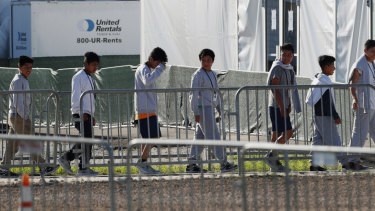 Children line up to enter a tent at the Homestead Temporary Shelter for Unaccompanied Children in Homestead, Florida. Credit:AP

Government rules call for the children to be held by the Border Patrol for no longer than 72 hours before they are transferred to the custody of Health and Human Services, which houses migrant youth in facilities around the country.

But many children interviewed by the lawyers said they were kept inside the facility near El Paso beyond 72 hours.

Customs and Border Protection did not immediately respond to the allegations about the conditions, but has said in recent weeks that it is overwhelmed and needs more money and help from the gridlocked Congress.

The allegations about the conditions inside the El Paso facility are the latest complaints about mistreatment of immigrants at a time when record numbers of migrant families from Central America have been arriving at the border.

Government facilities are overcrowded and five immigrant children have died since late last year after being detained by the US government. A teenage mother with a premature baby was found last week in a Texas Border Patrol processing centre after being held for nine days by the government.

The Trump administration has been scrambling to find new space to hold immigrants as it faces withering criticism from Democrats that it's violating the human rights of migrant children by keeping so many of them detained.