New York: As amateur investors banded together this past week to squeeze Wall Street hedge funds by sending GameStop’s stock prices to dizzying heights, some novice traders, like 10-year-old Jaydyn Carr of San Antonio, have seen their long-term investments pay off.

In December 2019, Jaydyn, then 8, was buying discounted games at GameStop and wishing for an Xbox One. Spying a way to use her son’s enthusiasm for video games to teach him about investing, Jaydyn’s mother, Nina Carr, decided to invest in 10 shares of GameStop at $US6.19 ($8.10) each for a Kwanzaa gift. 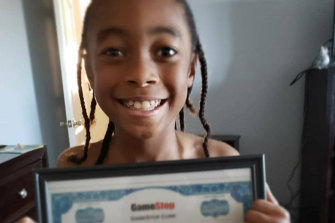 Jaydyn Carr, a 10-year-old from San Antonio, Texas was given 10 GameStop shares that cost $US6 apiece two years ago as a Kwanzaa gift from his mother Nina. Amid the GameStop trading frenzy, Jaydyn is reeling from excitement after selling his shares for about $US3200. Credit:Photo courtesy Nina Carr

Carr handed her son a certificate she created from an online template to explain to him that he was the owner of a tiny part of GameStop. She told him the gift was in keeping with the spirit of ujamaa, or co-operative economics, one of the seven principles of Kwanzaa.

She added alerts on her phone and computer to track the stock’s progress. Over the past few months, she noticed it steadily rise. But on Wednesday, to the shock of Carr and her son, the value of GameStop shares surged, soaring 1700 per cent since December after millions of small investors, many spurred on by social media, came together to put a squeeze on at least two hedge funds that had bet GameStop’s shares would collapse.

Carr, a nutritionist, quickly pulled her son out of virtual learning and asked him what he wanted to do. “I was trying to explain to him that this was unusual,” she told mySanAntonio.com, a segment of the San Antonio Express-News. “I asked him, ‘Do you want to stay or sell?’”

“I felt shocked and excited at the same time,” he said in a phone interview on Friday.

He said he had decided to save $US2200 and invest the remaining $US1000, most likely in shares of Roblox, an multiplayer gaming universe popular with young children, if and when the platform goes public.

“Long-term investing is important because that is how I got this money,” Jaydyn said.

The surge has piqued Jaydyn’s interests in amateur day trading. “He’s definitely ready to jump full force into the market,” his mother said.

Carr said she became committed to teaching her son about financial literacy after Jaydyn’s father, an Army combat medic, died in 2014 from combat-related complications. A certificate of deposit she opened with a death compensation payment provided an entry point to teach her son financial responsibility — lessons she said she didn’t learn until later in life.

She has taught Jaydyn how to speak to bank tellers, how to save his money, how to use a debit card, when to recognise when something is an impulse purchase and, recently, the charming game of the stock market.

“In the African American community, that’s a huge gap that I wanted to fill in,” Carr said of teaching her son about the stock market. “He’s all I have left, he’s my legacy. I wish more parents would do it. I think it would definitely interrupt a debt cycle to teach your kids about financial responsibility.”

“Anything can happen to me,” Carr added. “I just want him to make sure he understands the ways of life even when I’m not here.”