A Texas high school teacher was fired Tuesday for allegedly urging President Trump in a series of tweets to help remove illegal immigrants from her school, according to a report.

Georgia Clark, who had worked at the Fort Worth Independent School District more than 20 years, reportedly said she thought the tweets were private. 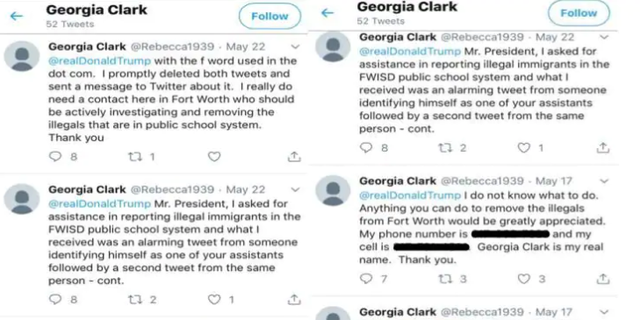 Georgia Clark, a former teacher at the Fort Worth Independent School District, messaged President Trump in a series of tweets she thought were private.
(Fort Worth ISD)

“Mr. President, Fort Worth Independent School District is loaded with illegal students from Mexico,” Clark allegedly wrote last month from a now-deleted Twitter account. “Anything you can do to remove the illegals from Fort Worth would be greatly appreciated.”

“Texas will not protect whistle blowers. The Mexicans refuse to honor our flag,” Clark allegedly wrote in another post. One of the tweets included her phone number.

The tweets caused an uproar in her school, which is 1/3 Hispanic, according to the Washington Post. Eight school board members voted unanimously Tuesday to terminate Clark’s contract. She has two weeks to appeal to the state and remains on leave with pay in the meantime.

According to a Fort Worth ISD review obtained by The Post, Clark acknowledged that the tweets were hers. The review also indicated that the school district was already investigating Clark for separate allegations that she made remarks about student’s ethnicity or immigration status.

The Post and local papers said they reached out to the lawyer who did not immediately respond.

06/05/2019 World News Comments Off on Texas teacher fired for allegedly tweeting to Trump to ‘remove’ illegal immigrants from her school: report
Recent Posts