Organic farmer and his Oxfam worker wife who were once awarded £25,000 grant from Prince Of Wales trust are now tarred with a terror conviction for ‘wanting to see their son safe’ 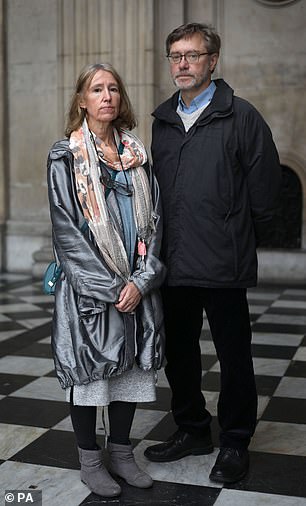 John Letts and Sally Lane in a previously-unissued photo in October 2017 while on bail, on the steps of St Paul’s Cathedral in London

The case of Jihadi Jack and his parents has sparked controversy as British parents ask themselves the same question – what wouldn’t you do if your child was in trouble?

Over a period of five years, Sally Lane and John Letts have begged, negotiated, campaigned and even gone on hunger strike to get their son safely home to Oxford.

Their efforts landed them in the dock of the Old Bailey, while Jack Letts, now 23, languishes in jail in northern Syria under Kurdish control, with no end in sight to their nightmare.

Before 2014, the Letts were an ordinary family, who would discuss a range of thoughts and ideas around the kitchen table.

John Letts, 58, who has dual Canadian citizenship, is an organic wheat tenant farmer while his wife Sally Lane, 57 had worked in publishing, as an Oxfam fundraising officer and for the Wildlife Trust.

Friends and former colleagues described Lane as honest and kind with a ‘strong moral compass’ while John Letts was said to be ‘generous’ and ‘compassionate’ towards the less fortunate.

In 2011, the couple celebrated being given the royal seal of approval when their Heritage Harvest and Oxford Bread Group were awarded a £25,000 grant from a fund set up by the Prince of Wales. 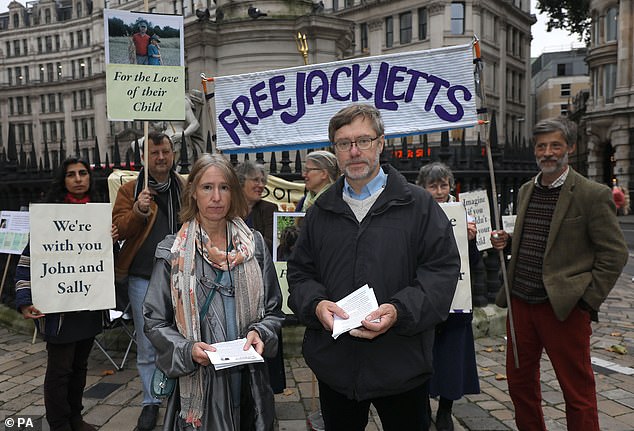 John Letts told the Oxford Mail the grant from the prince’s Countryside Fund was a ‘godsend’ at a time of challenges in British farming.

While their youngest son Tyler ‘breezed through life’, Jack Letts had long struggled with obsessive compulsive disorder and Tourette’s Syndrome, the court heard.

The couple supported him after he converted to Islam, but went ‘to pieces’ when they found out he had gone to Syria, jurors were told.

In a revealing message to her son, Lane spoke of her regrets as a parent.

She said: ‘Clearly I indulged you, I made you think you were the centre of the universe. I regret this bitterly.

‘I was a terrible parent that gave you too much power as a child – I should have made you adapt to the world, instead of adapting myself to your world. 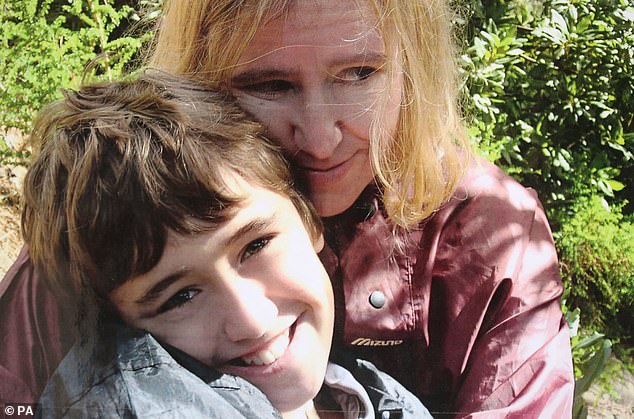 Sally Lane with her son Jack Letts. The couple supported him after he converted to Islam, but went ‘to pieces’ when they found out he had gone to Syria, jurors were told

‘I have done you no favours by doing this.’ 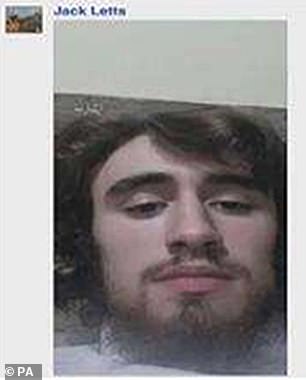 The Facebook profile of Jack Letts, in an image issued by Counter Terrorism Policing South East

She said Jack Letts showed signs of ‘mental illness’ adding: ‘I have to bear some responsibility for that as your mother.’

Since they were charged with funding terrorism, the defendants have put pressure on the British Government to bring their son home, even though police have said he could face charges on his return.

In October 2017, while on conditional bail, they staged a hunger strike on the steps of St Paul’s Cathedral.

In a press release, they said Jack Letts had been detained in a ‘Guantanamo-style black site’ in Rojava for more than five months.

Lane claimed the British police had ‘repeatedly told us there is no evidence that Jack has done anything wrong’ and he was being held under ‘false suspicion’.

She said he had been intercepted by Kurdish YPG forces as he attempted to flee to Turkey in May 2017.

John Letts said: ‘Despite our pleas, the British Government has refused to engage with the Kurdish authorities in trying to secure Jack’s release. 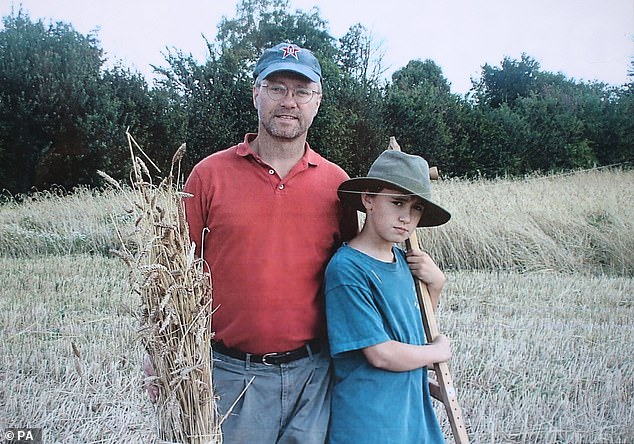 John Letts (left) with his son Jack Letts. His parents claimed their son had been detained in a ‘Guantanamo-style black site’ in Rojava for more than five months

‘They state there is no consular assistance in Rojava and that this self-declared autonomous region is not recognised by any foreign government.’

He was allowed to travel to Canada to lobby authorities there to intervene in the case.

The trial was delayed as the defendants challenged terrorism law at the Old Bailey, the Court of Appeal and the Supreme Court, it can now be reported.

Their lawyers had argued that they would be not guilty if they genuinely believed their son was not involved in violent jihad, regardless of evidence to the contrary.

But judges ruled that the case rested on what any reasonable person would have known or suspected the money was for, given the information the defendants had at the time.

The defendants also tried to force authorities to bring Jack Letts back to be a witness in their trial, to no avail. 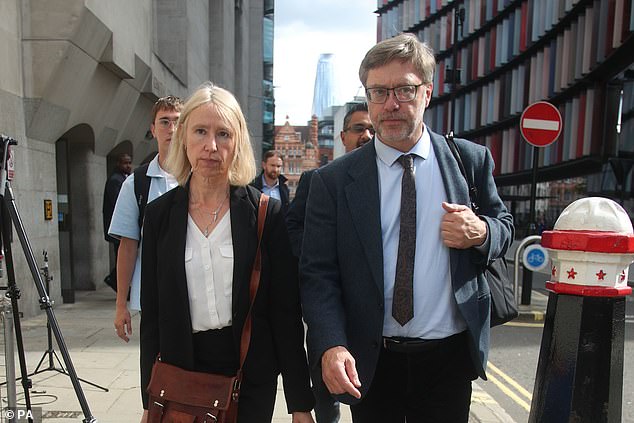 However, the defence successfully argued that a jury could consider whether the parents were acting under duress, in the belief their son was in danger of imminent harm by December 2015.

Just as the trial was about to get under way in September 2018 it hit another snag, this time in the form of protesters waving banners outside court.

Judge Nicholas Hilliard QC called a halt to proceedings when he was told of the placards outside which said ‘doing what any parent would do to save their child is not funding terrorism’ and ‘families supporting Sally and John’.

Calling campaigners either ‘foolish or misguided’, he put off the trial until May to ensure no jurors could be unfairly influenced either way.

He said the delay meant money was ‘thrown away’ and caused more anxiety for the defendants.

He warned that a repeat of the protest may result in arrest, contempt of court, a fine and/or jail. 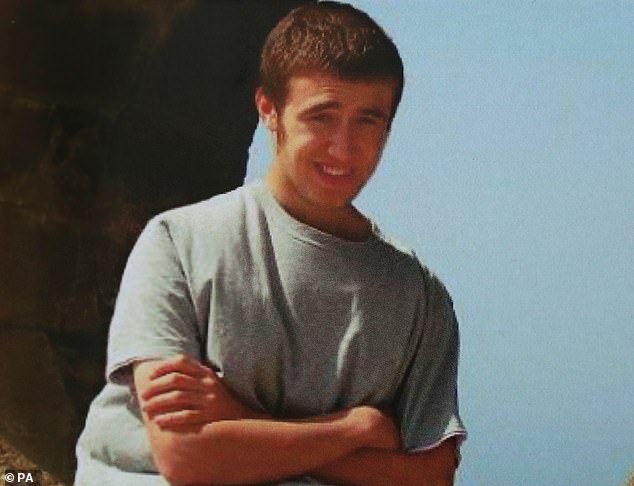 In Syria, Jack Letts has given interviews to the BBC and ITV from custody

There was no repeat of the banner waving outside court when the trial finally got under way in a packed courtroom almost exactly five years after Jack Letts left Britain aged 18.

Meanwhile in Syria, Jack Letts has given interviews to the BBC and ITV from custody.

A Panorama programme in which he was due to feature had to be put on ice ahead of his parents’ trial.

In a voicemail to a BBC journalist, Jack Letts allegedly said: ‘To be honest the whole idea of putting pressure on the British government to come and save me is not something I wanted to do or something I thought was clever.’

John Letts dismissed his son’s apparent rejection of his efforts, calling it ‘rubbish’.

In February, Jack Letts told ITV: ‘If the UK accepted me then I’d go back to the UK, it’s my home. But I don’t think that’s going to happen.’

While the Letts case attracted wide publicity, another similar case involving the brother of a 16-year-old jihadi bride in Syria received less attention.

In February, Salim Wakil, 25, was jailed for 30 months for sending his sister 3,000 dollars to help her return home to Britain, despite police warnings.

In jailing him at the Old Bailey, the judge said he was ‘naive’ and ‘foolish’ but accepted he was no supporter of IS.