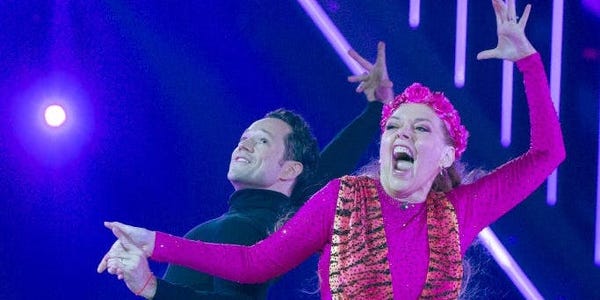 The daughters of "Tiger King" star Carole Baskin's missing ex-husband, Don Lewis, on Monday aired an advertisement calling for information into their father's disappearance during Baskin's first night dancing on ABC's "Dancing with the Stars."

"We are a real family, and to us he was daddy," Lewis' daughter, Gale Rathbone, said in the opening clip in the commercial, which has since been uploaded to the family lawyer's YouTube page. Two of Lewis' other daughters from his first marriage also appeared in the advertisement.

The advertisement offered a reward of $100,000 for information in Lewis' disappearance. Baskin, who was Lewis' second wife, has emphatically denied that she was involved in her then husband's 1997 appearance. She shot to viral fame following her appearance in "Tiger King" earlier this year and was announced as a contestant on Dancing with the Stars on September 2.

"His family deserves answers," John M. Phillips, an attorney for the family, says at the end of the advertisement,  calling on viewers to contact a tip line with any information about his disappearance. "They deserve justice. Do you know who did this, or if Carole Baskin was involved?

Variety reported that the advertisement aired in several markets, including in Tampa and Jacksonville, Florida. As the outlet noted, no one has ever been arrested or charged in the case and Lewis was declared legally dead in 2002, four years after his disappeared.

The March 2020 Netflix documentary featured Baskin and her current husband, Howard, and their explosive clashes with the documentary's subject, Joe Exotic. The third episode of eight-part "Tiger King" deals with the speculation that Baskin was involved in her husband's disappearance more than two decades ago.

Exotic, known as the "Tiger King" was arrested in 2018 and is currently serving a 22-year prison sentence for killing tigers and his role in a plot to hire an undercover FBI agent to assassinate Baskin. Following the immensely popular docu-series, Florida investigators announced they have reopened the investigation.

09/15/2020 World News Comments Off on The family of Carole Baskin’s missing ex-husband offered a $100,000 reward in a commercial that aired during her ‘Dancing with the Stars’ debut
Recent Posts
We and our partners use cookies on this site to improve our service, perform analytics, personalize advertising, measure advertising performance, and remember website preferences.Ok