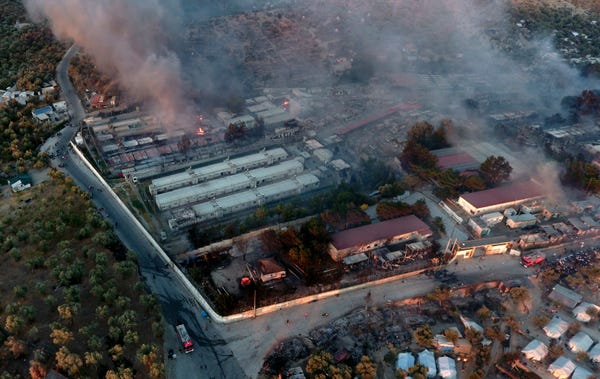 Refugee Camp Moria— the largest migrant camp in Europe — was engulfed in flames Wednesday, leaving as many as 20,000 refugees leaving them homeless and displaced.

Some officials called the fire a "humanitarian disaster" as thousands of migrants have to leave behind what they called home.

The blaze started at around 2 a.m in the campgrounds, on the island of Lesbos, Greece, and quickly spread. Authorities are still not sure the cause of the fires, which began in different parts of the camp, but some have noted that they followed clashes between migrants and locals after 35 camp residents tested positive for the coronavirus and refused to quarantine.

These photos show what the campgrounds looked like before and after the incident.

Moria Refugee Camp — located in Lesbos, Greece — was built in 2015 to accommodate 3,000 people, but was over capacity with about 20,000 people living there. 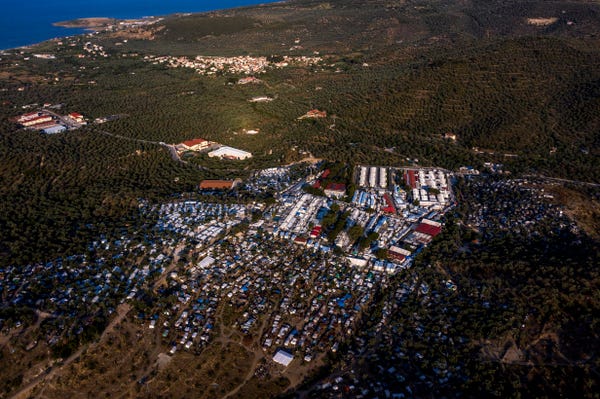 Makeshift camps were built to accommodate everyone living there. 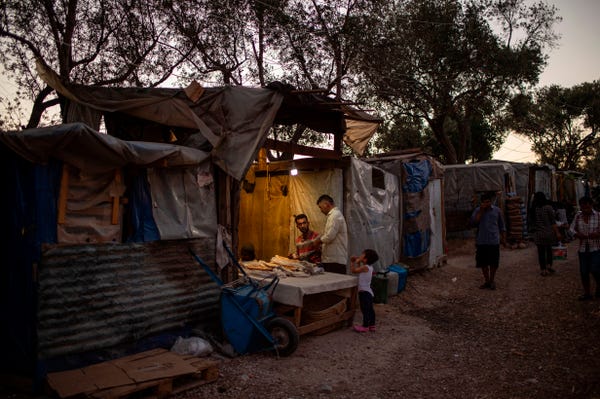 Over 4,000 children, including 407 who are unaccompanied, resided at the refugee camp, according to the United Nations Refugee Agency. 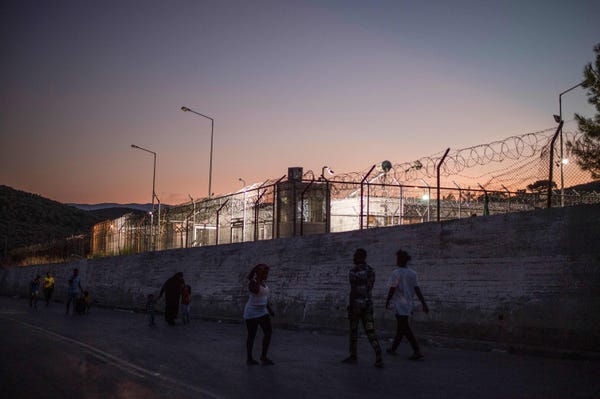 Flames took over the camp Wednesday at 2 a.m., prompting thousands of inhabitants to flee the site. The fires reportedly started in different areas of the camp. 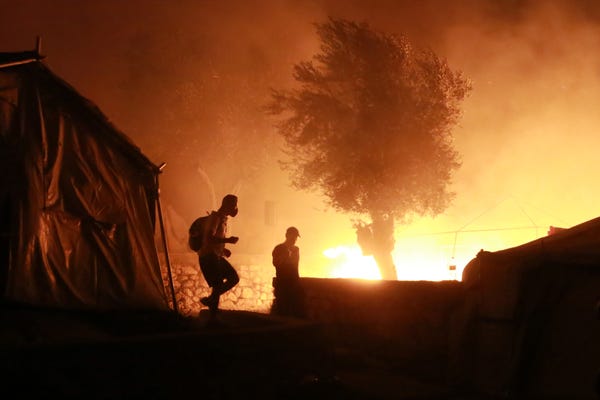 How they started is still unclear. Tensions in the area have reportedly been high since 35 refugees tested positive for coronavirus and refused to quarantine with their families. 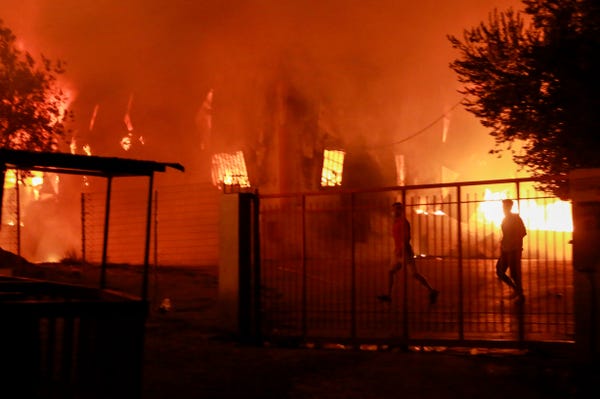 Athens issued a state of emergency. Dozens of firefighters tried to extinguish the fire but were met with pushback from refugees. 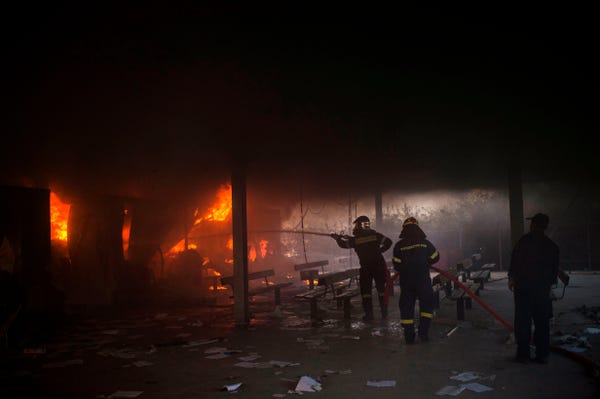 "Migrants threw stones at firefighters trying to put out the fires. The cause is under investigation," Constantine Theophilopoulos, a fire chief, told a local TV station.

A local official said the fire was "premeditated" and that "the tents were empty." The United Nations Refugee Agency said friction between nearby "villages and asylum seekers" could be to blame. 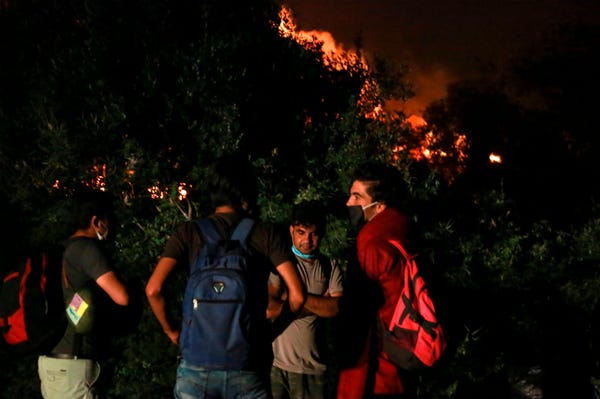 Some migrants blamed "far-right Greeks" after clashes between local Greeks and migrants, which followed the announcement that 35 residents had the coronavirus, according to BBC News.

"The situation in Moria cannot continue because it is a matter of public health, humanity and national security at the same time," Greek Prime Minister Kyriakos Mitsotakis said in a statement. 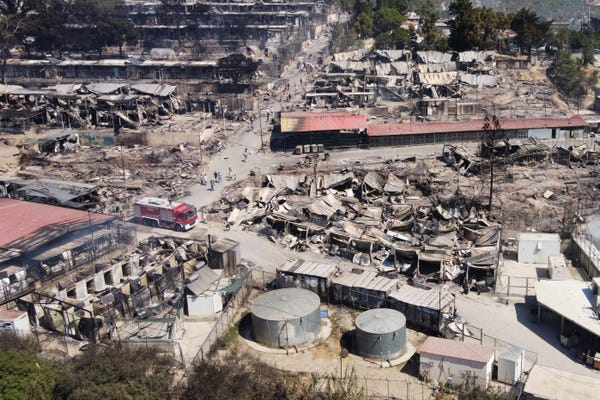 "The fire spread inside and outside of the camp and has destroyed it," Stratos Kytelis, the mayor of Mytilene, the capital of Lesbos, told a local radio station. "There are more than 12,000 migrants being guarded by police on a highway." 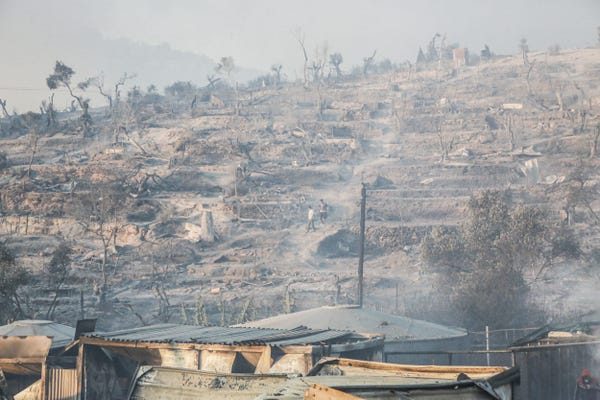 Camp residents tried to go to nearby towns for shelter but were blocked by authorities. Many refugees made their own accommodations and slept in fields or roads. 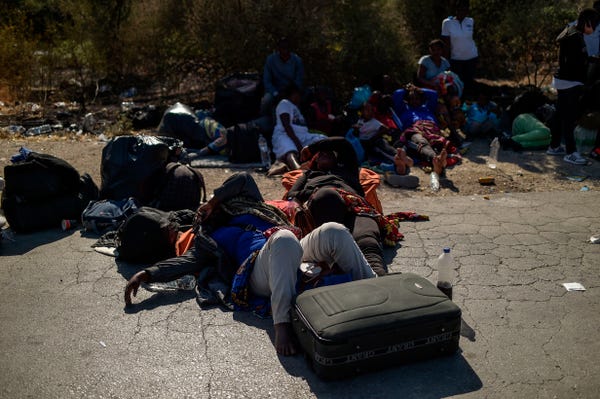 European Union Home Affairs Commissioner Ylva Johansson, said she will fund the transfer of 400 unaccompanied children and teenagers to the mainland. 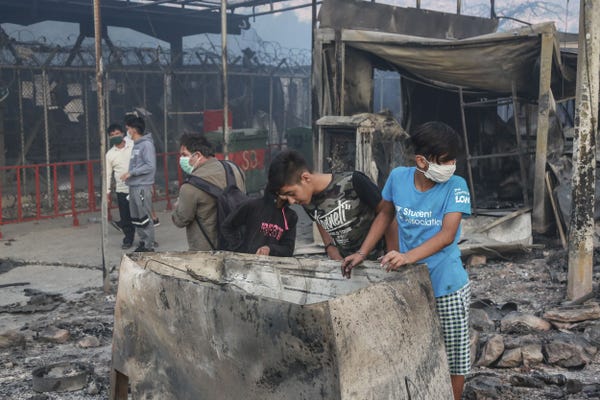 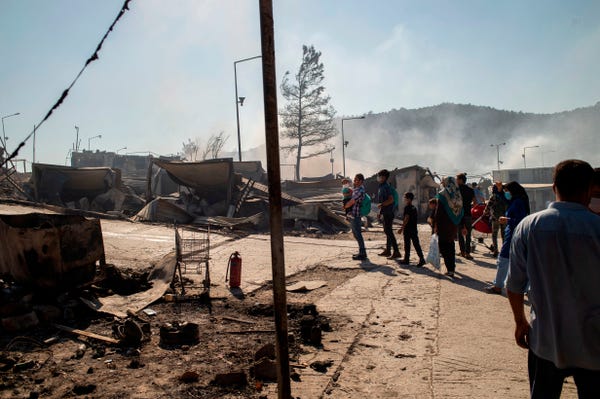 A camp migrant told Reuters that many refugees are still homeless while "trying to find a place to at least just stay." 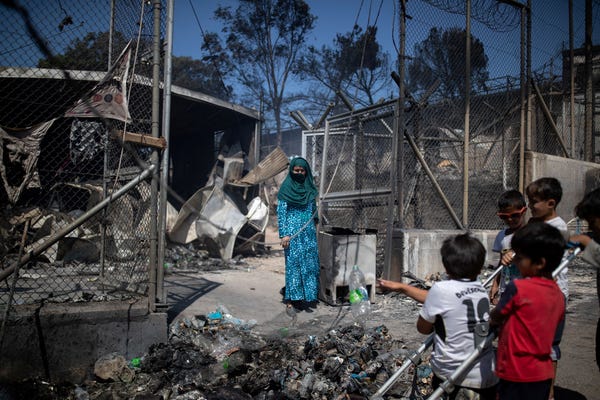 Ursula von der Leyen, the president of the European Commission, said, "We stand ready to support, with Member States. Our priority is the safety of those left without shelter." 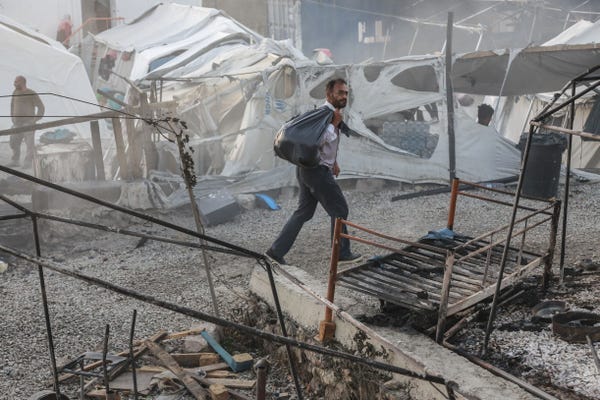 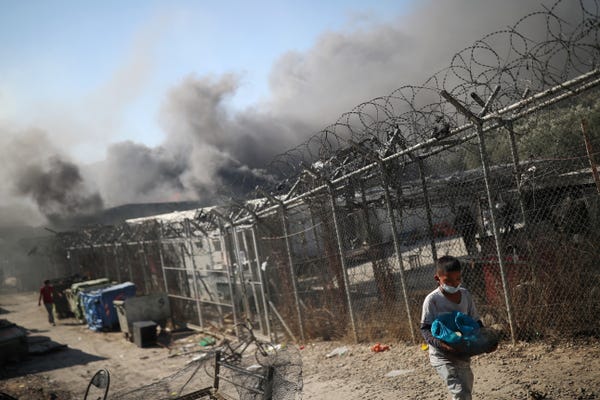 Dimitra Kalogeropoulou, the Greece Country Director for International Rescue Committee, said, "Everyone who was living in the camp has now been evacuated, and while there have been no official reports of injuries we are hearing reports that say otherwise." 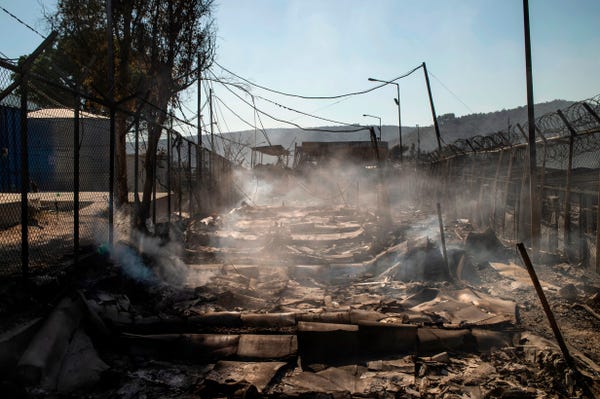 "Those who were living in Moria are now left with nothing; already traumatized people have now lost what few belongings they had," she added. 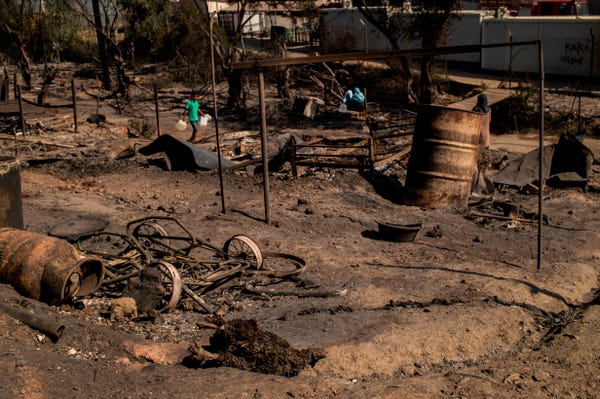 09/09/2020 World News Comments Off on The largest migrant camp in Europe was set ablaze. Here’s what it looked like before and after the fires.
Recent Posts
We and our partners use cookies on this site to improve our service, perform analytics, personalize advertising, measure advertising performance, and remember website preferences.Ok