University of Alabama employees remove the name of Hugh F. Culverhouse Jr. off the School of Law sign in Tuscaloosa, Ala., Friday. The University of Alabama board of trustees voted Friday to give back a $21.5 million donation to a philanthropist Hugh F. Culverhouse Jr., who recently called on students to boycott the school over the state’s new abortion ban. (AP Photo/Blake Paterson)

TUSCALOOSA, Ala. – The University of Alabama board of trustees voted Friday to give back $21.5 million from a philanthropist who urged students to boycott the school over the state's controversial abortion law, and then promptly removed his name from the campus' law school named in his honor.

Hugh F. Culverhouse Jr. said the school was punishing him for urging students to consider other educational options in the state. He pledged last year to donate $26.5 million in all over four years –  in what would have been the largest donation in the school's 187-year history.

"I expected this response from UA," Culverhouse said of Friday's vote, according to NPR. "I will not allow my family's name to be associated with an educational system that advocates a state law which discriminates against women, disregards established federal law and violates our Constitution." 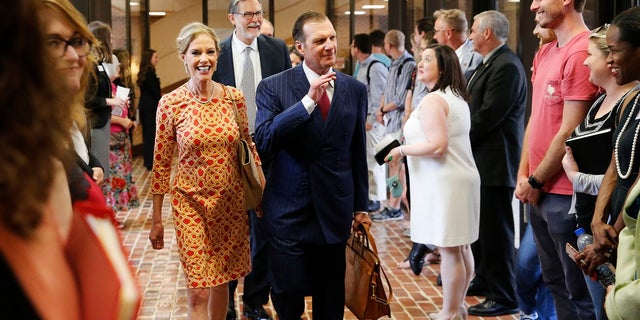 In this Sept. 20, 2018, photo, Hugh F. Culverhouse Jr. and his wife, Eliza, enter the University of Alabama law school in Tuscaloosa, Ala. The university appears poised to reject a $26.5 million pledge by Culverhouse, who recently called on students to boycott the university over the state’s new abortion ban. (Gary Cosby Jr./The Tuscaloosa News via AP)

The transfer of the $21.5 million back to the 70-year-old real estate investor and lawyer was processed Friday. The school said the dispute was not related to concerns over the state's abortion law.

"The action taken by the board today was a direct result of Mr. Culverhouse's ongoing attempts to interfere in the operations of the Law School," the university's vice chancellor for communication, Kellee Reinhart, said in a statement to Fox News. "That was the only reason the Board voted to remove his name and return his money."

Alabama Chancellor Finis St. John recommended returning the money, saying Culverhouse's expectations of how his gift would be used were "inconsistent with the essential values" of the university.

Culverhouse told the university the monetary gift was intended to fund scholarships to admit more students.

"Despite the diligent efforts and good faith of our Dean and President, there is no path forward consistent with those values. While we are grateful to all of our donors and supporters, and very grateful to this donor and his family, donors do not dictate our administration of the University," St. John said Friday.

Months after his donation, Culverhouse called for a boycott of the school over Alabama's restrictive abortion ban.

The law was passed last month and set to take effect in November. It would make terminating a pregnancy a crime punishable by 10 years to life in prison for the provider, with no exceptions for rape or incest.

Culverhouse did not attend Alabama, but his parents did. The business school is named after his father, Hugh Culverhouse Sr., a wealthy tax lawyer and former owner of the Tampa Bay Buccaneers NFL franchise.

After the vote, he said the donations from him and his father over the years were, in part, to rid the state of negative stereotypes.

“We are the land of the backward, we are hicks, we lack the sophistication to see two sides to an argument.”

06/07/2019 World News Comments Off on The Latest: Donor says university is punishing him
Recent Posts