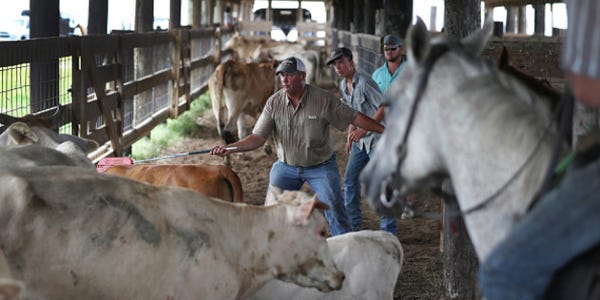 Swarms of mosquitoes in Louisiana have been attacking livestock and draining their blood until they die.

The insects have moved in to more populated areas after Hurricane Laura hit the state in late August.

Adding to the list of devastating effects, the southwest Louisiana mosquito population "exploded", killing off a number of cows, deer, and horses, the Louisiana State University AgCenter said in a press release.

A number of livestock owners reported losing cows, bulls, and horses from the mosquitoes. One veterinarian told the LSU AgCenter that a cattle producer lost 20 cows. He told the Associated Press that a penned deer operation lost 30 out of 110 deer, at a loss of $100,000.

The mosquitoes suck the blood out of livestock, so the animals move around to try to get away from them, and then  they can't get enough oxygen and eventually fall to death.

LSU AgCenter veterinarian Dr. Christine Navarre recommended in the press release that livestock owners spray for mosquitoes, use rubs for the animals, put coverings on them if it's not too hot, and use good nutrition and heat practices to keep the livestock otherwise healthy.

Some parishes have sprayed for mosquitoes, and AgCenter agent Jimmy Meaux said that's helped to control the pests.

09/11/2020 World News Comments Off on The mosquito population in southwest Louisiana is so big after Hurricane Laura that swarms of them are killing cows and horses
Recent Posts
We and our partners use cookies on this site to improve our service, perform analytics, personalize advertising, measure advertising performance, and remember website preferences.Ok