The Pope is reunited with Cardinal Georg Pell, days after a former Vatican official was accused of bribing witnesses in bid to secure a sex abuse conviction against the Australian priest

Pope Francis has met with Cardinal George Pell days after the Australian accused an Italian cardinal of using Vatican funds to bribe witnesses to secure his sex abuse conviction.

Cardinal Pell, the Vatican’s former economy minister, spent more than 400 days behind bars after being convicted of abusing two 13-year-old choir boys in the 1990s, before the verdict was overturned on appeal earlier this year.

The Vatican announced the meeting between Pell and Pope Francis in a statement on the pope’s daily private audiences, but gave no details. 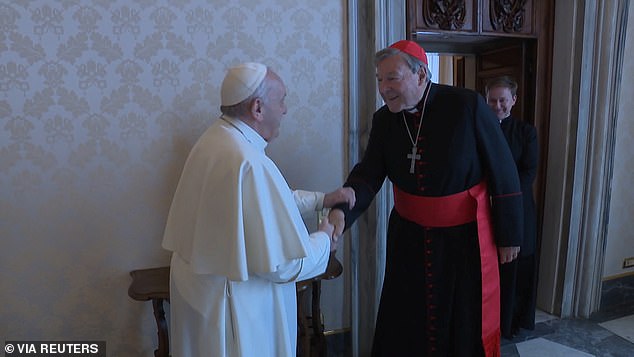 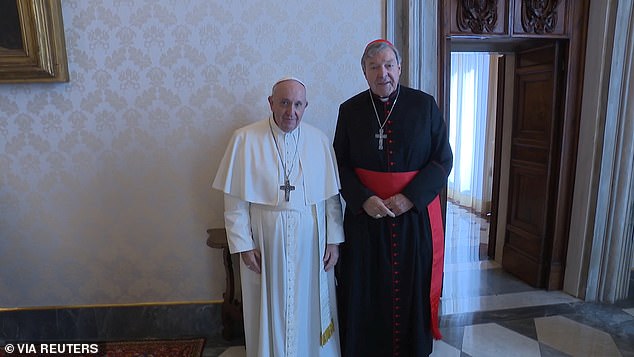 Cardinal Pell, the Vatican’s former economy minister, spent more than 400 days behind bars after being convicted of abusing two 13-year-old choir boys in the 1990s, before the verdict was overturned on appeal earlier this year

‘It went very well,’ Pell told reporters in front of his residence just outside the Vatican walls, although it remains unclear if he will take up another role in the Vatican.

Pell returned to Rome last month just days after the pope fired Pell’s nemesis, Italian Cardinal Angelo Becciu, who was accused of embezzlement and nepotism. Becciu has denied all wrongdoing.

Robert Richter, QC, who defended Pell against the abuse charges, spoke after reports from Italy accused Giovanni Angelo Becciu, a senior Vatican cardinal, of wiring €700,000 (£635,000) to Australia to secure evidence against Pell. 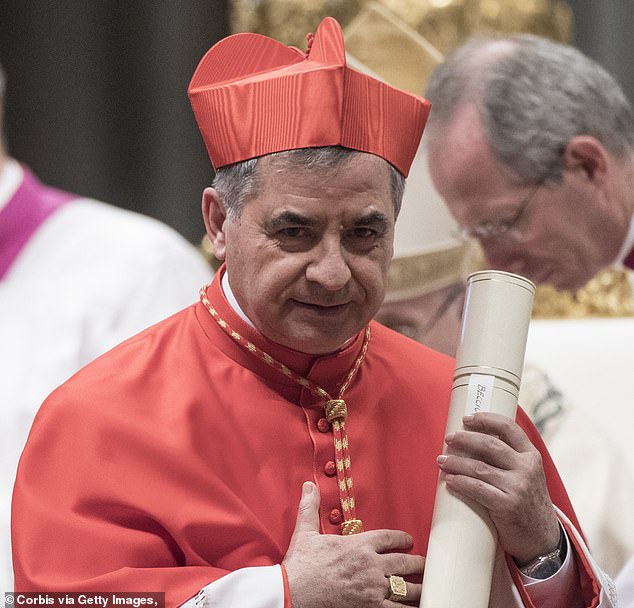 ‘These are grave allegations… which require the most thorough investigation seeking to establish a money trail,’ Mr Richter said to The Times newspaper.

‘I would hope that both Australian and international law-enforcement money trackers do their job professionally and with complete independence so that we all get to know what the true facts were.’

Cardinal Becciu has strongly denied the reports, stating: ‘I categorically deny interfering in any way in the trial of Cardinal Pell’. Pell’s accuser has also denied receiving any bribe in the case. 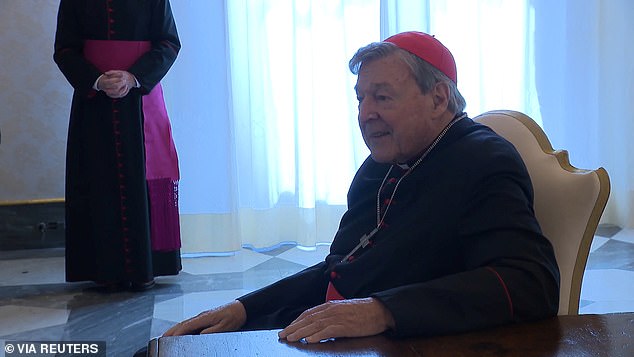 While Becciu was number two in the Vatican’s Secretariat of State and Pell was economy minister, the two had a very stormy relationship.

Becciu told reporters the day after he was sacked about a meeting between Pell, the pope and Becciu where Pell told Becciu, ‘You are dishonest’, and Becciu replied: ‘How dare you!’

After Becciu was sacked, Pell said: ‘The Holy Father was elected to clean up Vatican finances. He plays a long game and is to be thanked and congratulated on recent developments.’ Pell said he hoped the ‘cleaning of the stables’ would continue.

Becciu’s lawyer has denied Italian media reports that his client sent money to Australia to help Pell’s ‘enemies’ while he was facing the sexual abuse charges.

Through his lawyer, the Australian man who accused Pell of sexually abusing him two decades ago denied Italian reports speculating that he may have been bribed to testify. 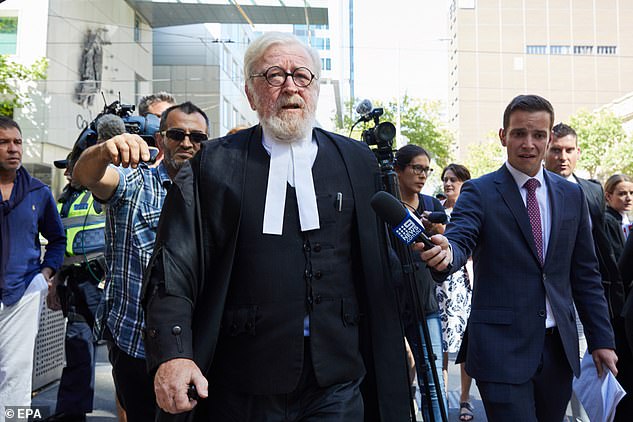 ‘If those reports are accurate, they have to be investigated,’ Richter (pictured in 2019) said on Tuesday. ‘I want these reports to be thoroughly investigated by both Australian and international authorities’

Pell, brought in by Pope Francis to bring accountability and transparency to the Vatican’s opaque finances, was convicted but ultimately absolved by Australia’s High Court of allegations he molested two choirboys in St. Patrick’s Cathedral in Melbourne while he was archbishop in the 1990s.

He was released in April this year after spending 13 months behind bars, and upon his release, he claimed that other officials at the Vatican believed opposition he faced to financial reform were later linked to the later sex-abuse charges.

The Corriere report had no sourcing, attribution or details and the report appeared more an effort to discredit Becciu and distract attention from the shortcomings of the Vatican prosecutors’ primary investigation into a London real estate venture.

Vivian Waller, a lawyer for the prosecution’s key witness whose testimony led a jury to initially convict Pell in 2018, said on Monday her client hadn’t been bribed.

‘My client denies any knowledge or receipt of any payments,’ Waller said in a statement. ‘He won’t be commenting further in response to these allegations.’

Italian newspaper Il Messaggero reported that the accusation that Becciu channelled cash to Australia was made by Father Alberto Perlasca, a former assistant to the cardinal, who according to The Times is co-operating with investigators after his office was raided. 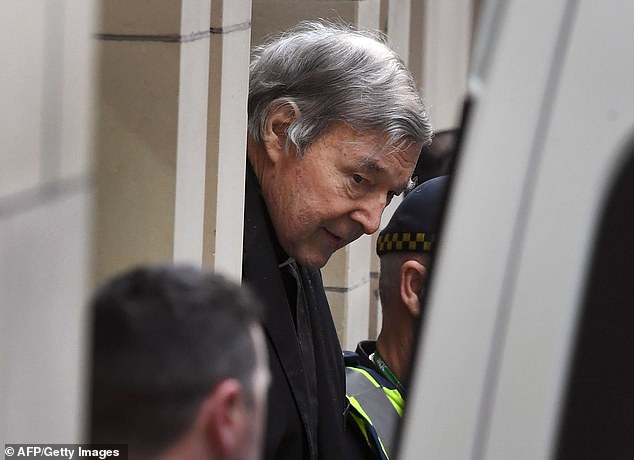 Cardinal George Pell (right) is escorted in handcuffs from the Supreme Court of Victoria in Melbourne last year after being convicted of sexual abuse. He was later acquitted

Ed Condon, an editor at the Catholic News Agency, told the newspaper: ‘There’s never been a shortage of people at the Vatican noting the coincidence of the timing of Pell’s departure, but that doesn’t make it a conspiracy.

‘We need to wait and see,’ he said, noting that a trail is always left when large sums of money are moved around the globe.

Cardinal Becciu was forced to resign last month amid separate accusations he misappropriated Catholic funds while working as the deputy secretary of state between 2011 and 2018.

Among a raft of suspicions – all denied by Cardinal Becciu – are claims he may have funnelled Vatican cash to charities and businesses run by his three brothers.

10/12/2020 World News Comments Off on The Pope reunites with Cardinal Pell amid bribery scandal
Recent Posts
We and our partners use cookies on this site to improve our service, perform analytics, personalize advertising, measure advertising performance, and remember website preferences.Ok