President Donald Trump's press conference at the White House on Friday morning was a roll call of false and baseless claims about "illegal" votes, secret counts and how forces were working to "steal" the election from him.

"It's amazing how those mail-in ballots are so one-sided," he said at one point. The US television networks ABC, CBS and NBC all cut away as his falsehoods mounted. 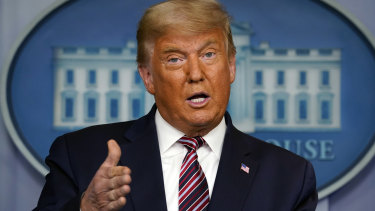 In several states, Trump's campaign pressed ahead with lawsuits challenging the validity of the count, and protests erupted in cities and outside some election offices.

As returns trickled in for the election in states like Pennsylvania and Nevada, Trump's path to victory continued to narrow, electorally and mentally. Despite an effective campaign for Republicans, Democrat rival Joe Biden appeared poise to win more Electoral College votes.

With fewer places to manoeuvre, Trump, who hadn't spoken publicly in 36 hours, also had fewer options to change the narrative on what one reporter described as "the incredible shrinking presidency."

Trump appeared in the White House briefing room, and in a hoarse voice, made a series of outlandish claims about the election.

Here are the top six untruths, lies and distortions uttered by Trump at the hearing.

with The New York Times

11/06/2020 World News Comments Off on The shrinking presidency: Six main lies from Trump’s press conference
Recent Posts
We and our partners use cookies on this site to improve our service, perform analytics, personalize advertising, measure advertising performance, and remember website preferences.Ok