Portsmouth: “I never forgot anything,” one D-Day veteran said. “It was all hell let loose.”

“I don’t want to remember,” another said.

Royalty, leaders of the free world, an impressive multimedia production and a military flypast were all upstaged at Wednesday’s D-Day 75th anniversary commemoration in Portsmouth by a small group of old men. 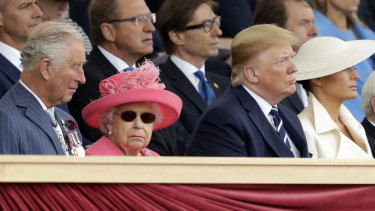 Prince Charles, the Queen, US President Donald Trump and US first lady Melania Trump attend an event to mark the 75th anniversary of D-Day in Portsmouth.Credit:AP

This dwindling, proud band, now in their 90s, had taken part in one of the history of war’s most daring, difficult and deadly assaults, which embarked from this spot.

And now they gathered again, perhaps for the last time, to remember, or not.

Les, 93, was a navy signalman taking American troops to Normandy. He doesn’t want to remember, or perhaps cannot.

“I just thought I would come and perhaps meet someone I served with,” he said, looking around. 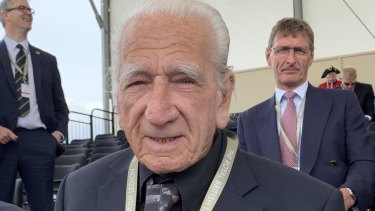 Alfred Fuzzard, 97 (who looked years younger, which he put down to “a good wife and a good diet”), was a petty officer on board LCF30. LCF stands for Landing Craft (flak).

He remembers the RAF bombing Sword Beach as they came in to land.

“I could feel the heat of the bombs,” he said. “There was immense smoke and flame all along the beach. It was all hell let loose for a couple of hours.

“Jerry realised too late and then our troops were amongst them.”

He said he doesn’t believe in coming to this sort of thing, usually.

“It makes me feel humble, when I talk to the people here about what they did.” 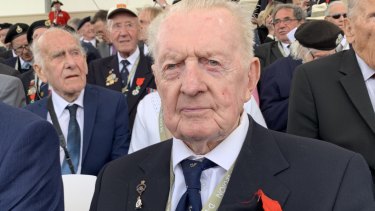 John Worthington, 94, was given the job of “clearance” on that day.

“On the way in we hit a couple of mines, blew the front off our craft. Then we hit the beach.”

“There were loads of mines everywhere. We were stabbing our bayonets in the sand, there was a shortage of mine detectors.”

The next day he was assigned to the padre, taking the ID badges from those killed in the minefield. He remembers the reverend strolling ahead of him as if without a care.

“I thought ‘I’ll walk in his footsteps’. We came out all right.”

Later, he served in the Far East, landing at Rangoon.

“It seems a long while ago really,” says the man who spent much of the rest of his life as a lobster fisherman in Norfolk.

He thought he’d come to the event “Because I probably won’t go again. I’m nearly 95. Chances are.” 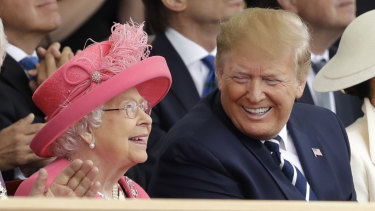 The Queen and US President Trump at the D-Day commemorations in Portsmouth, UK.Credit:AP

The hour-long production featured music, video, dance (some swing to celebrate the arrival of the US in the war), drama (excerpts from the play Pressure about debates over weather forecasts in the lead up to the invasion), and readings from contemporary diaries and speeches performed by actors and the leaders of the UK, Canada, France and US.

It concluded with a military flypast. 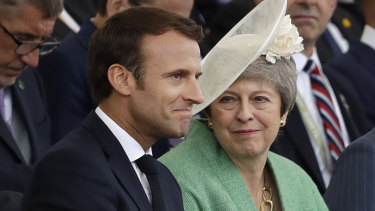 The Queen gave a speech poignant with personal memories.

“When I attended the commemoration of the 60th anniversary of the D-Day Landings, some thought it might be the last such event,” she said.

“But the wartime generation – my generation – is resilient, and I am delighted to be with you in Portsmouth today.

“75 years ago, hundreds of thousands of young soldiers, sailors and airmen left these shores in the cause of freedom.

“In a broadcast to the nation at that time my father King George VI said: ‘what is demanded from us all is something more than courage and endurance; we need a revival of spirit, a new unconquerable resolve’.

“That is exactly what those brave men brought to the battle as the fate of the world depended on their success.

“Many of them would never return and the heroism, courage and sacrifice of those who lost their lives will never be forgotten. It is with humility and pleasure, on behalf of the entire country – indeed the whole free world – that I say to you all, ‘thank you’.”

In the day’s most moving, unscripted moment, a handful of veterans walked to the front of the stage and the crowd rose in a spontaneous standing ovation.

One veteran had to be held back from tottering over the edge.

Even now, his instinct was to keep going.

06/05/2019 World News Comments Off on They fought on the beaches: Queen hails her ‘resilient’ D-Day heroes
Recent Posts