“The thing about balloons,” says artist Patricia Piccinini, “is that when you see them, you know it’s going to be a great day.

“They can only come out when the weather’s good. So, if it’s really windy or rainy, they’re just not going to come out. It’s not up to me, it’s up to nature. So, you have to be lucky to see them.” 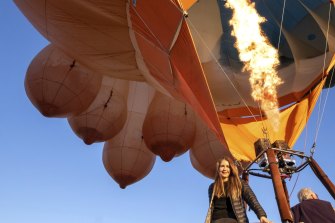 Artist Patricia Piccinini is preparing to have two exhibitions of her artwork in her home town.

Melbourne’s, and Piccinini’s, luck must be changing with her Skywhale family of airborne artworks set to make their first appearance in the city’s skies as part of the MPavilion, which opens in the Queen Victoria Gardens on Thursday.

Her exhibition A Miracle Constantly Repeated took which two years to prepare – but was open for just one day in the abandoned ballroom above Flinders Street Station when it closed in June, a victim of lockdown – is open again.

“This is my biggest exhibition in Melbourne since my show at ACCA in 2002 … so it’s wonderful to have these two projects so close together in my hometown,” she says. 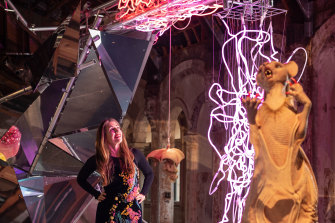 The cancellation of Rising festival which Piccinini’s exhibition, A Miracle Constantly Repeated was part of, was devastating for her and the 750 other artists who had contributed to the festival.

“That was really hard, especially when we were all feeling so buoyant and kind of hopeful at that point,” she says. “Having said that, I think quite a lot of those projects have found new homes. My project has also reopened, so emotionally it was tough, but we got through it.”

Piccinini says the experience has made her doubly appreciative of being able to exhibit her art. Visitors will be able to see the parallels between the giant inflatable sculptures of the Skywhale family and the exhibition at Flinders Street Station with its hyperreal chimera sculptures.

She’s been thrilled to hear of people dancing around the exhibition in the Flinders Street ballroom to a soundtrack composed by Jess Green of Pheno, who has also composed music to be played for the Skywhale family’s dawn launch. 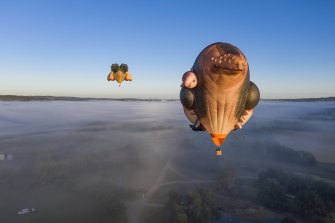 The Skywhale family will fly above Melbourne for the first time.

“You go there in the early morning and it’s dark and there’s the fire of the burners and it’s incredibly beautiful,” Piccinini says. “It’s a ritual in a way, a performance and it’s a very convivial thing.”

She says the Skywhale family has an element of spectacle because of the artworks’ sheer scale and their flight will echo the flights of Melbourne’s hot air balloons which are a regular early morning sight in parts of the city.

For Piccinini community art events are more important than ever after the pandemic and Melbourne’s lockdowns.

“We were separated from each other – for good reasons, for safety reasons – but that was really hard to endure and now we need to heal from that process,” she says. 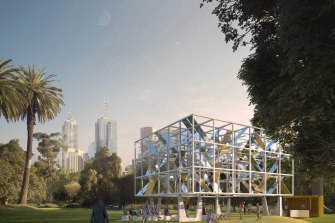 The Skywhale family is one of 250 free events which will be held at the 2021 MPavilion, entitled The LightCatcher over its 152-day season.

MPavilion creative director Jennifer Zielinska says the pavilion which is erected each year acts as an architectural beacon and positions Melbourne as a cultural and design capital.

“It is a strange year but everyone is so eager and there is such a hunger to be out at public events and see people again and socialise,” she says.

11/27/2021 World News Comments Off on ‘This feels like my year’: Skywhale family to take flight
Recent Posts