FIRE chiefs have slammed a thoughtless TikTok trend which results in teens getting stuck in baby swings – after the number of emergency callouts nearly doubled in a year.

Teenagers squeeze themselves inside the equipment designed for infants to film short social media videos on TikTok. 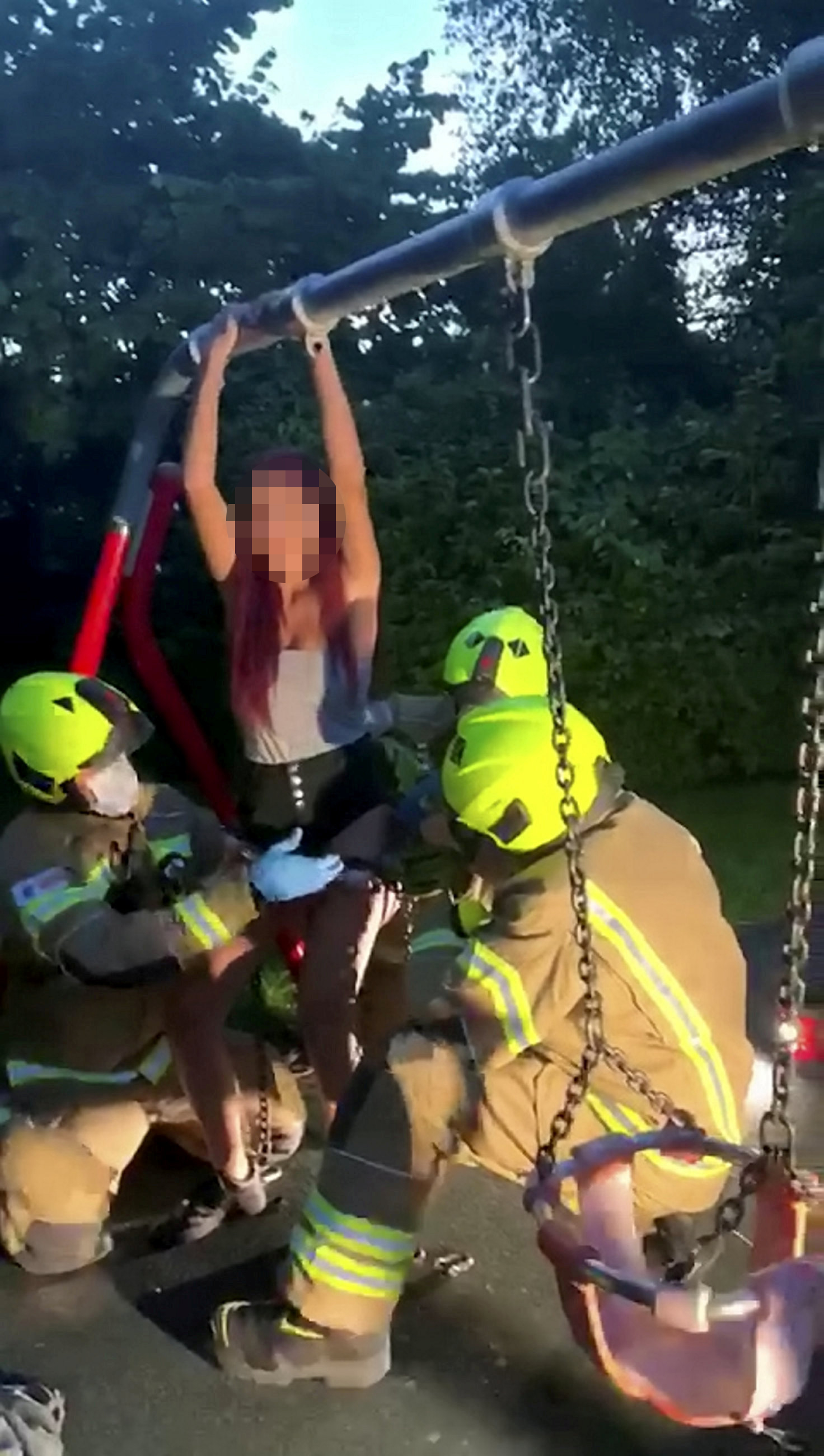 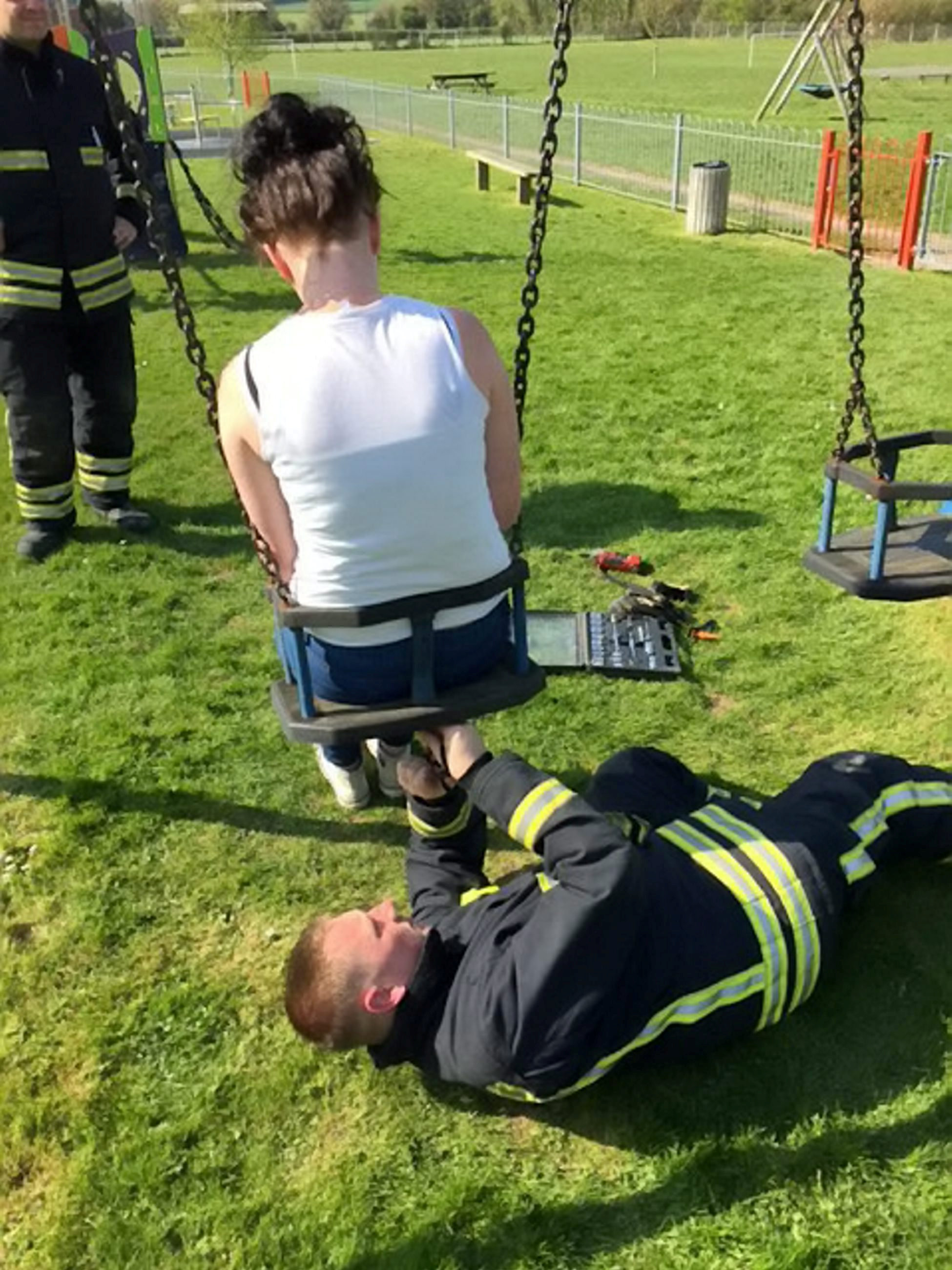 But many teens end up lodged in the seat needing to be cut free.

Data obtained through Freedom of Information requests show there were at least 777 callouts in the UK last year for people who got stuck.

Sources say the TikTok craze will be a large part of those callouts. This is a 77.3 per cent increase on the 438 swing rescues in 2019.

Tory MP Nigel Mills said: “This is shocking and ridiculous at the same time. It’s a total waste of resources for firefighters.

“Peoole who do this should be fined. They are for babies to play in not older people.

“I’d be tempted to leave them there, although, I suppose, you can’t really.

"How awful would it be if a firefighter couldn’t get to a fatal house fire quick enough because he was freeing these idiots.”

One firefighter told The Sun: “This craze is definitely to blame for the increase.

'BETTER THINGS TO DO'

“We have better things to be doing than cutting teenagers out of swings who think it’s a laugh. While we are dealing with them a house fire could be killing people.

“It’s very irritating. TikTok videos will be to blame for a lot of those.”

Scotland Fire and Rescue Service received the most call outs with a whopping 98 – almost one every three days – jumping from 48 the previous year.

Call outs were at least double for fire services such as Merseyside, Manchester and Leicestershire – with Essex, Buckinghamshire, Cleveland, Worcester, Northamptonshire and Northern Ireland more than tripling.

Some services with fewer swing rescues the year before witnessed five times as many callouts.

Northumberland had two in 2019 but 12 the following year. Oxfordshire, West Sussex and Norfolk all only had one call out each in 2019 but eight, six and five rescues respectively last year.

And the fad shows no sign of slowing down as London Fire Brigade has already rescued at least 21 people from swings so far this year – mainly in the early evenings. 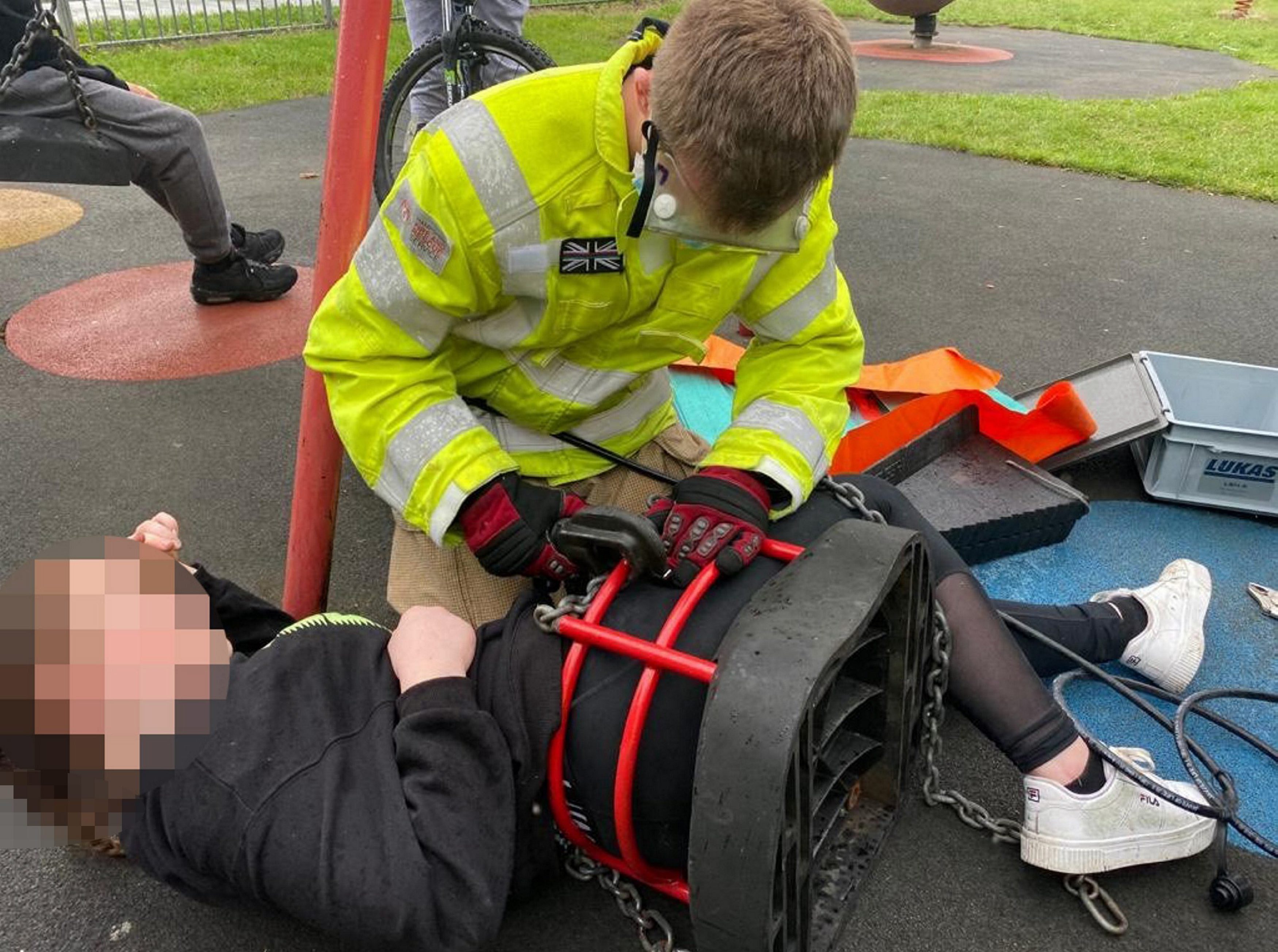 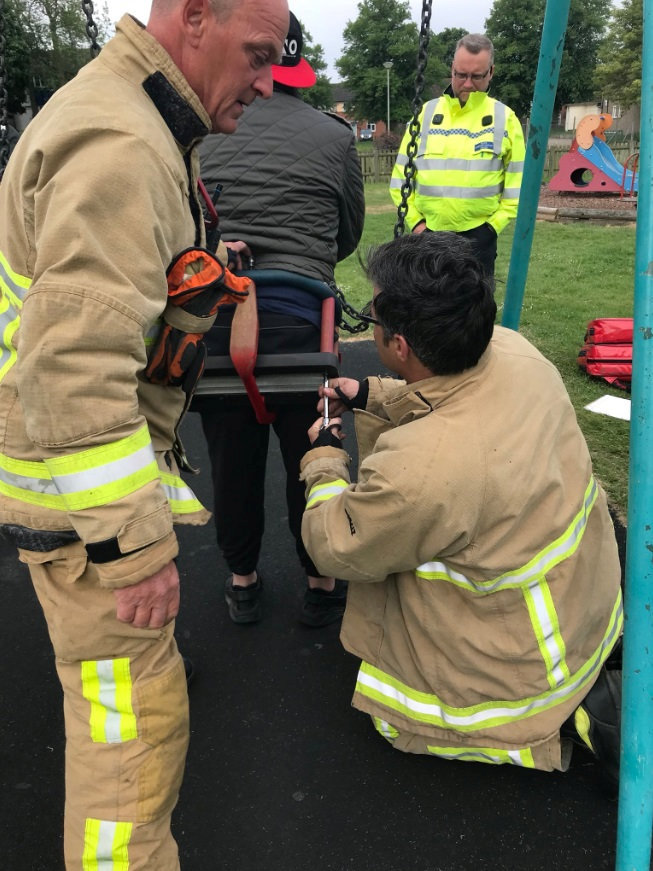 Its Assistant Commissioner for Fire Stations Jane Philpott warned last month: “In their quest for TikTok fame, people have been potentially diverting our crews from more serious incidents and that isn’t something we want to see.

“We would ask people to please just think twice before taking part in this challenge – think of the injuries you could cause yourself, the damage to the swings which have to be cut apart and most of all the fact you’re tying up resources which could be needed for a genuine emergency.

“It might be a fun story for your friends, but wasting the time of emergency services is serious.”

In Kent, 99 people have needed saving from swings in the last four years. But 63 of those rescues have come since January 2020.

The service urged: “Please stop, this wastes crews’ time,” and adapted the lyrics to Jay Z’s song 99 Problems: “99 problems with swings stuck on bums. If you having TikTok problems we feel bad you hun. We got 99 (swing) problems when it should be none.”

After being delayed to other emergencies when releasing two teenagers with bums stuck in swings last July, South Wales Fire and Rescue warned: “If you are over the age of 4 please don’t try and get in one!!”

Hampshire & Isle of Wight Fire Control tweeted the hashtag “#YouAREBigandNotClever” after a teen was trapped in Cosham.

And Greater Manchester Fire Service pleaded for kids to stop attempting the challenge after dealing with three call outs in a single day. 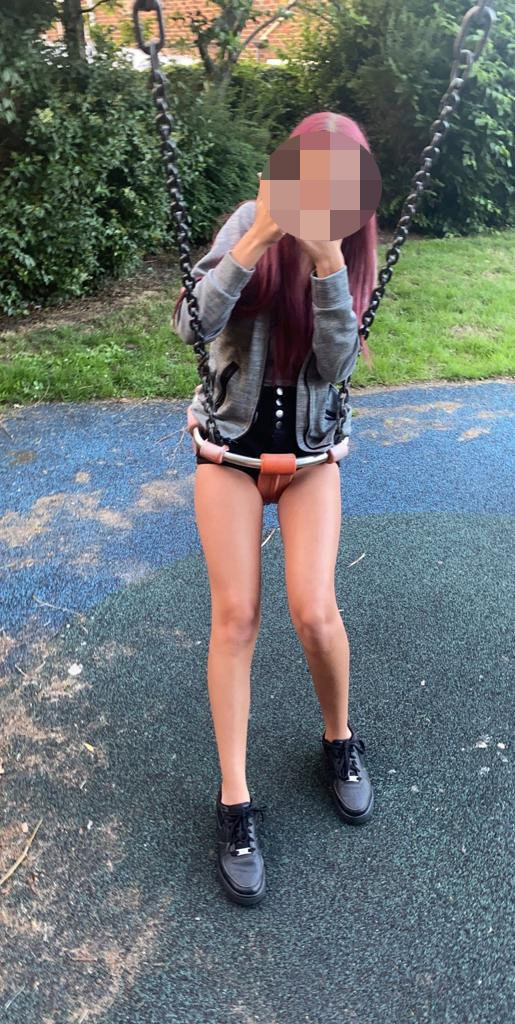 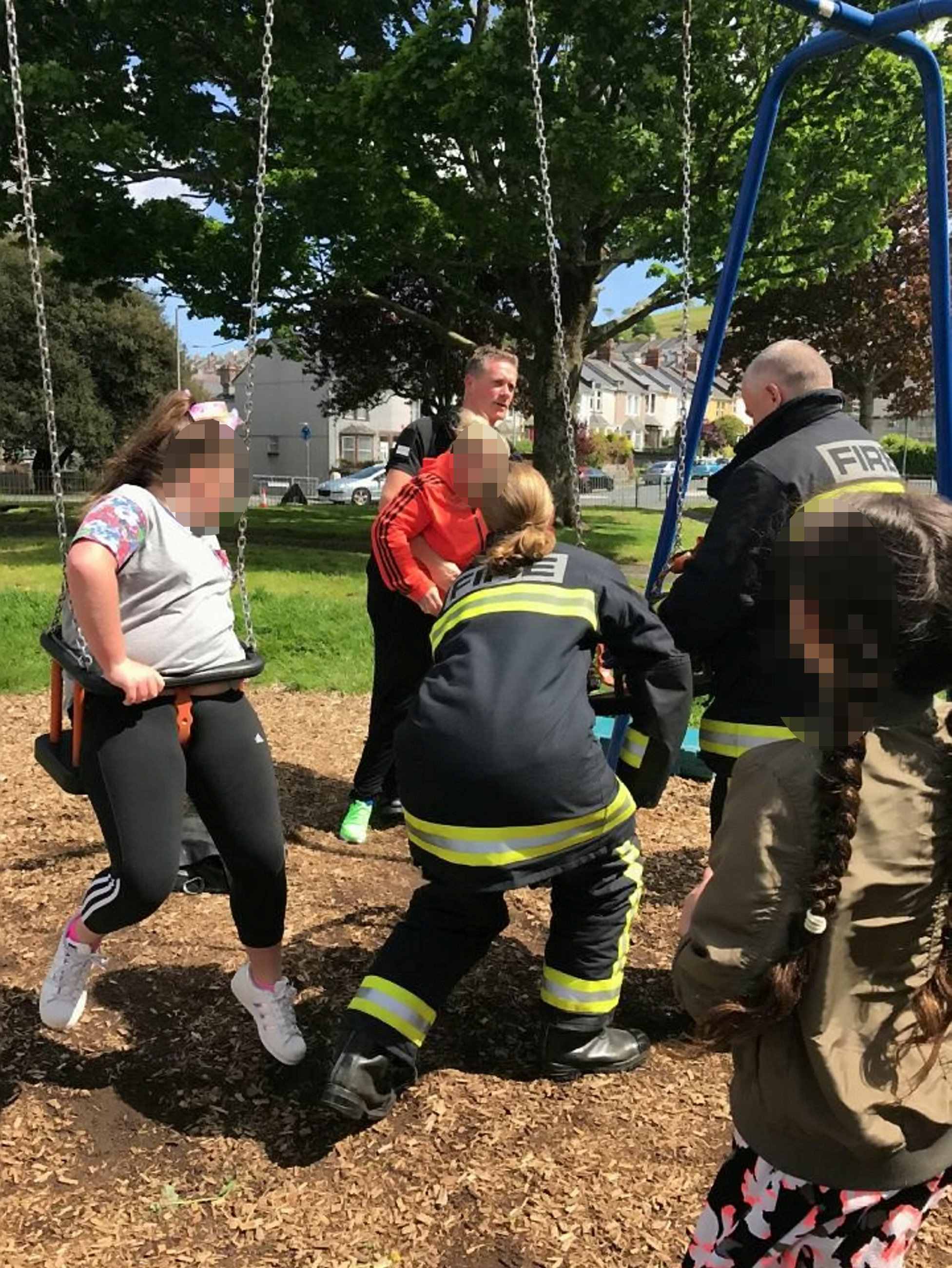