It was 4.53 on the morning of November 18, 2011 when Castle Hill station officer Brett Johnson arrived at Quakers Hill Nursing Home, responding to a "run of the mill" fire alarm.

"I remember the time distinctly," Mr Johnson said, recalling the moment he was first confronted with the extent of the tragedy about to unfold. 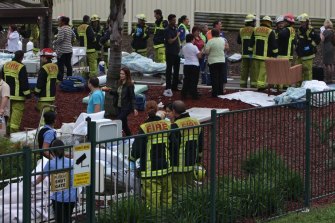 The scene at Quakers Hill Nursing Home on the morning of the fire which resulted in 11 deaths.Credit:Dallas Kilponen

"I went into the building with my firefighters and saw the first seat of the fire in a room with no one in it, and I thought 'oh, this can be dealt with quite easily'.

"But as I came back out into the foyer, I looked the other way and saw, possibly 30 to 40 metres away, a door purging out with black smoke. That was the moment I knew."

Mr Johnson and his crew stayed on the site until 10am, as they attempted to save more than 80 elderly residents trapped inside the building. Eleven died in the blaze, which an inquest later revealed was deliberately lit by a nursing home staff member.

A new national mental health initiative aims to provide first responders with tools to build their mental fitness, and deal with the confronting situations they face in their work. 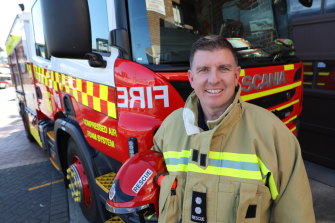 In 2018, Beyond Blue found 40 per cent of first responder workers and 33 per cent of volunteers were diagnosed with a mental health condition in their lifetime, compared with 20 per cent of the general population.

After attending Quakers Hill expecting to reset an alarm (there were no triple zero calls), Mr Johnson said the scenes at one of Sydney's most tragic fire events in recent memory continued to emotionally affect those who attended.

"The firefighters really struggled for a long period of time," he said.

Although they attended debrief sessions and support groups immediately after the incident, Mr Johnson said the ongoing inquest and media attention made it hard to move on from the tragedy.

"You see it played out over and over again … you can second-guess some of the decisions you made."

The Peak Fortem program is based on the UK Ministry of Defence's HeadFIT, a program supported by Prince Harry who said in a statement the Australian expansion was "the next step in a global movement towards mental fitness".

Former Soldier On CEO John Bale received a federal government grant to produce a local version following the devastation of the 2019/20 bushfires.

Although soldiers and emergency services workers are in different environments "the response to trauma is similar and the focus on mental fitness is the same", Mr Bale said.

The new program, which includes video sessions and exercises such as breathing strategies, will be used by the Rural Fire Service and Fire and Rescue NSW as well as organisations in other states.

Prime Minister Scott Morrison said he hoped the "tremendous" initiative would encourage first responders to invest in their own wellbeing.

Mr Johnson, who joined Fire and Rescue in 1999, said mental health support had continued to improve during his time with the organisation, where members often deal with people in extreme distress.

"We do not like seeing people hurt … to see other humans in pain, it is not natural to do that," he said.

Mr Bale said the program differed from the existing support provided by chaplaincy or peer support initiatives in emergency services organisations, because it was "proactive rather than reactive".

"When we talk about mental health, usually it's in the negative – this is about building positive mental health for people for when, not if, they experience a traumatic event."

01/21/2021 World News Comments Off on ‘To see others in pain, it is not natural’: The mental health toll of first responders
Recent Posts