Tony Blair’s eldest son posed for a selfie with the Liberal Democrats deputy leader today as he became the latest figure with links to New Labour to appear to back the resurgent Remainer party.

Euan Blair let Jo Swinson launch her campaign to replace the outgoing Sir Vince Cable at the offices of his start-up company We Work in central London.

She used the high-profile event to blast the leadership of Labour under Jeremy Corbyn and rule out going into a coalition with him.

It came the day after Mr Blair’s mother Cherie Blair, 64, was reported to have voted Lib Dem in the European elections.

And Alastair Campbell, his father’s former spin doctor, was thrown out of the Labour Party on Tuesday after admitting he voted for Sir Vince Cable’s resurgent party in Thursday’s poll.

Speaking at the firm’s plus offices in Marylebone, Ms Swinson ruled out propping up either the Conservatives or Labour in their current forms: “Currently, the leadership of those parties is so fundamentally opposed to our core values that that (a coalition) isn’t possible.’

Her launch came as a shock new poll saw the Lib Dems storm into the lead in terms of general election voting intention, with the Brexit Party second and Labour and the Tories tied in third. 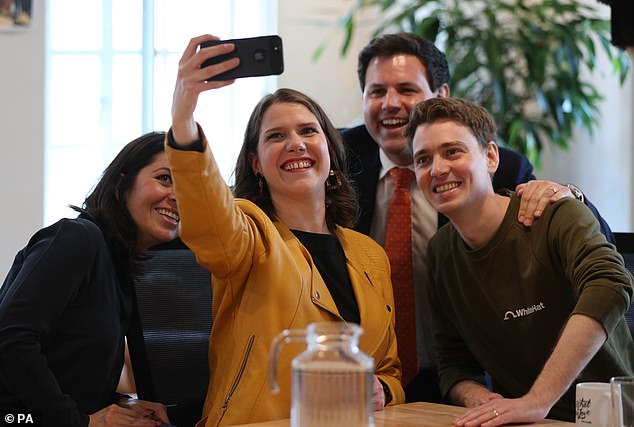 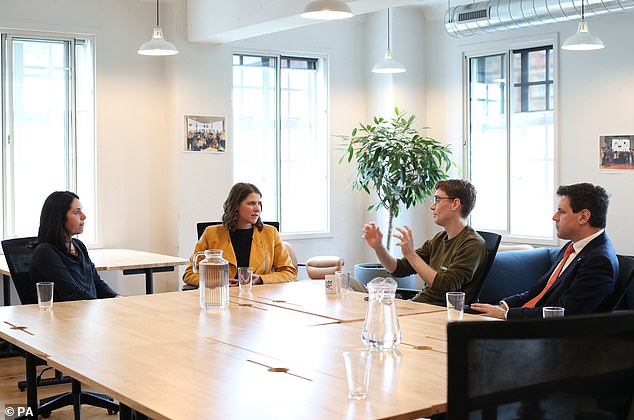 The quartet later sat down for a discussion in the offices of at WeWork in Marylebone, London 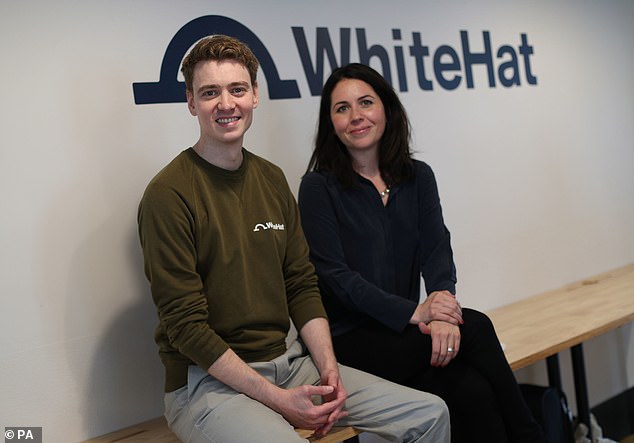 Sophie Adelman and Euan Blair were visited by Jo Swinson at WeWork, which was set up last year

Mrs Blair yesterday joined the revolt against Labour. Sources close to her made clear she did not support Labour in the polls last week – amid claims she too backed its unashamedly pro-EU rivals.

The intervention was effectively a challenge to Jeremy Corbyn to kick her out, as he faces all-out mutiny from Remain supporters.

Her husband, former PM Tony Blair, has said he voted Labour ‘without any enthusiasm’.

There has been an #expelmetoo backlash on social media, and deputy leader Tom Watson has branded the move – which is now being reviewed – ‘spiteful’.

Mr Campbell was ousted after he admitted backing the Liberal Democrats because, unlike his party, they were strongly in favour of a so-called People’s Vote.

Today’s event came five years after Euan was reported to be thinking about becoming a Labour MP.

He was linked with the seat of Bootle, Merseyside, just a stone’s throw from his mother Cherie’s childhood home.

Peter Dowd was eventually chosen and has been the MP since 2015.

Ms Swinson, 39, who served as a minister in the David Cameron/Nick Clegg coalition between 2010 and 2015 government, did not totally rule out joining a coalitions.

But she demanded fundamental political reform as the price of support.

She said: ‘Strategically, for solving the problems within our politics, we need to change the broken way in which we do things.

‘One of the key things that needs to happen as we address the political chaos is, we need to change our electoral system.

‘That’s part of what’s going wrong. In any future discussions with any leaders that are not so diametrically opposed to our values, that fundamental political reform has to be front and centre.’

She added: ‘There’s no way we can go forward in the future in those type of arrangements without securing that political reform.’ 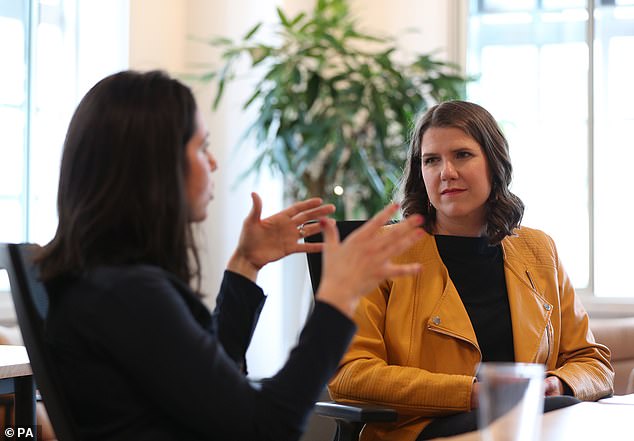 Speaking at the firm’s plus offices in Marylebone, Ms Swinson ruled out propping up either the Conservatives or Labour in their current forms 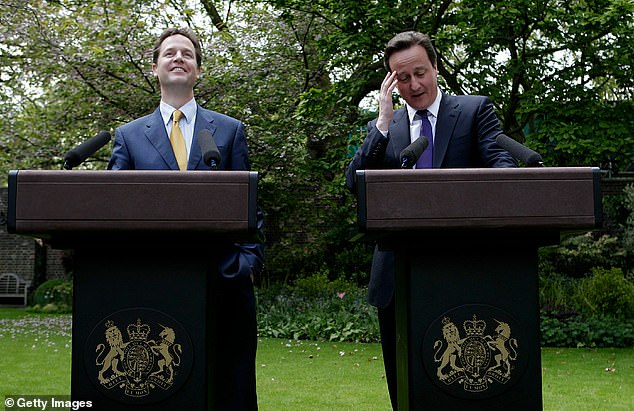 The Lib Dems were last in a coalition between 2010 and 2015 under the leadership of Sir Nick Clegg (left, with Prime Minister David Cameron) before being almost wiped out

A new Lib Dem leader will be in place on July 23 after Sir Vince Cable announced his decision to stand down earlier this year, and Ms Swinson will face competition from former cabinet minister Sir Ed Davey.

Ms Swinson used an appearance on the BBC’s Question Time to confirm the leadership bid.

The East Dunbartonshire MP said stopping Brexit was a fight that could be won and there was growing support for a people’s vote.

She added: ‘The Lib Dems are committed to stopping Brexit and we are optimistic given the recent European election results.

‘There’s an appetite among many people in the country, looking at the Brexit shambles, to say: ‘This nonsense has to stop.’

‘We have to win the battle in Parliament and that is through cross-party alliances.

‘Parliament does not want a no-deal exit. That has been crystal clear. Parliament is going to have its say.

‘So this is absolutely a fight we can win and the way to do this is to get the coalition of support for a people’s vote.’ 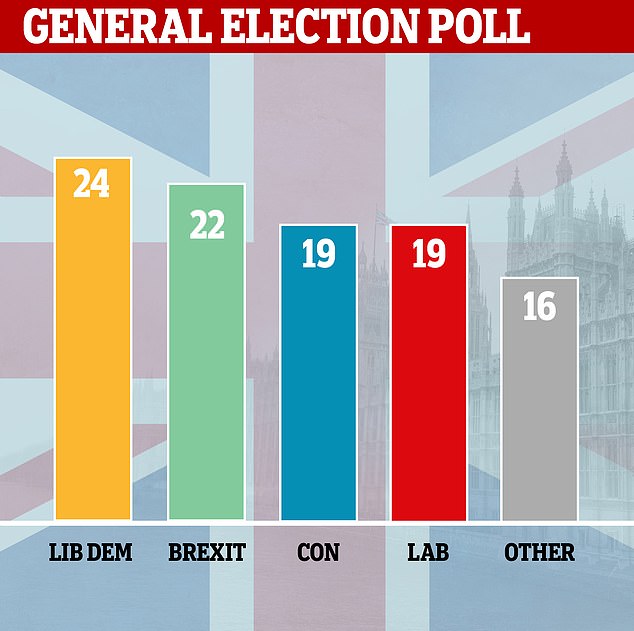 Mr Farage fumed that his party was ‘hidden’ from voters in the shock survey, which put it in second place – although still ahead of the Tories and Labour.

The YouGov findings are the latest evidence of a major political earthquake in the wake of dramatic European elections, and sent Westminister into overdrive.

The Brexit Party, which came top in the European election, was close behind with 22 per cent. 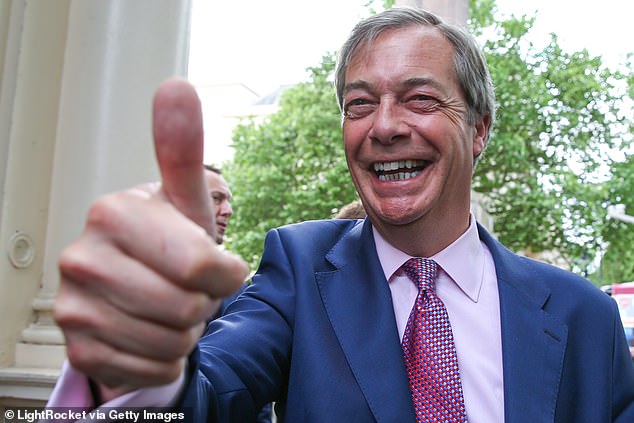 Ms Swinson’s rival for the leadership launched his campaign with a plan to call on the Queen to stop a no-deal Brexit.

Sir Ed said he would propose a ‘cross-party humble address to Her Majesty, requiring the Prime Minister to revoke Article 50 if we got to the cliff edge.

‘I hope Jeremy Corbyn will join me in that address.’

A humble address is a direct communication from the House of Commons to the Queen, calling on the Government to comply with a request. If approved, humble addresses are considered to be binding on the House.

Sir Ed, the party’s home affairs spokesman, said: ‘Under my leadership, the Lib Dems will continue to lead the fight to stop Brexit, nothing is more urgent in British politics today.’

The Conservatives and Labour were tied on a dismal 19 per cent.

But Mr Farage dismissed the poll results as skewed against his party – pointing out that it was not listed as an option.