Thirty years ago Melbourne was withering. Development had stalled, financial institutions collapsed and then, as now, many long-term residents were heading for the hills.

Then, as now, the government looked for an economic defibrillator to shock the CBD out of its flat-lining. Like the desperate punter looking for a winner in the last race, premier Joan Kirner turned to a sure thing – a juicy slice of the gambling pie. 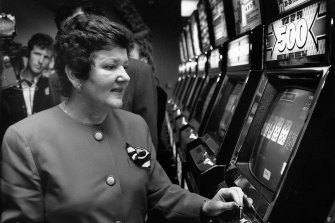 The big gamble: Premier Joan Kirner in August 1992 with one of the state’s first legal gaming machines at Windy Hill.Credit:William West

The last obstacle, her predecessor John Cain, had been removed months before and so the government announced it would licence a casino and introduce gambling machines.

It was supposed to be a lifeline for a state teetering on the brink of recession and a government heading (with an approval rate of 22 per cent) for annihilation. It achieved neither rescue.

The Kirner plan was for pokies, capped at 10,000 (now 30,000) and a relatively modest casino to fund hospitals and charities. She wanted to tap the $400 million of Victorian gambling money that headed interstate and overseas each year.

It was not designed to become one of the state’s biggest industries and change the very identity of Melbourne, but once the wheels began to spin it was always going to end as a jackpot for the house.

Just months after gambling machines began operating in 1992, Liberal leader Jeff Kennett was swept into office with Kirner’s golden chalice. She had dug the mine, leaving Kennett to pocket the gold. 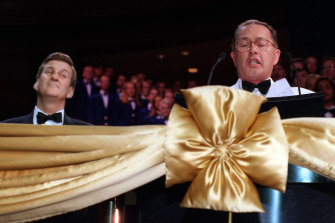 Then premier Jeff Kennett (left) and casino boss Lloyd Williams at the official opening of Crown Casino in 1997.Credit:Jason South

The new premier told friends too many politicians spent too much energy trying to keep power. He want to use power to restructure public institutions and build big projects with money from the casino – funding the Exhibition and Convention Centre (Jeff’s Shed) and the Museum. From his first day in office Kennett began to build his legacy.

The thought of a “modest” casino didn’t fit the Kennett mantra and was shelved. Melbourne’s would be the biggest in the Southern Hemisphere and compete on the world stage, bringing thousands of tourists and the gambling “whales” who win or lose a fortune on the roll of the dice.

One of those whales was media magnate Kerry Packer, who would buy into Crown. His son James would inherit and enlarge the stake, investing around the world.

But James forgot the golden rule of all casinos: If you stay too long at the table, you will always lose. 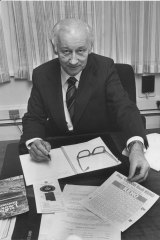 Xavier Connor, who headed the inquiry into whether Victoria should have a casino, at his desk in 1982.Credit:Age archive

Everyone expected the green light but Connor was no pushover and his report, now nearly 40 years old, was prescient.

The Victoria Police submission to the inquiry was made by my father Fred, then director of the Australian Bureau of Criminal Intelligence. He said a legal casino could satisfy a demand being met by organised crime that was “making huge profits”, in part for corrupt officials.

“Providing a legal means for local people and visitors to gamble might, on balance, be in the best interest of good order from a law enforcement agency’s point of view.”

Asked at the inquiry “are we winning at the moment against organised crime or moving back?“, Fred said: “Moving backwards.” This did not win him friends at the big end of town, not that that seemed to worry him. Spin for him was something he did when fishing. 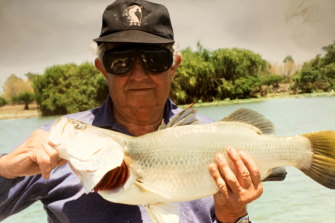 If a casino was established, he said, it should concentrate on table games and not have poker machines. In London the largest casino has 150 gaming machines. Crown now has more than 2500.

Connor looked at all options, from convention casinos to smaller clubs, opposing the type that aggressively try to build a bigger business. He considered an “unobtrusive, modest casino” to satisfy local existing demand without touting for business.

Finally he recommended against any type of casino, accurately predicting there would be relentless pressure to relax the rules, expand the business and encourage new gamblers. He said previous premiers John Cain snr and Sir Henry Bolte introduced lotteries and off-course betting as small ventures to satisfy existing demand. Both turned into mega-industries. 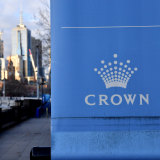 From the moment it opened, Crown has expanded, just as Xavier Connor warned 40 years ago that any casino would.Credit:Joe Armao

He said any casino would be the “thin edge of the wedge” and small casinos would become big ones. The first plans for Crown included one 350-room hotel. It now has three with more than 1600 rooms, with another of 400 on the books.

When Crown opened in 1997 in its permanent home, it was twice the size of the initial tender that included 200 gaming tables. It now has 540. In the first year it had eight million visitors. It now has 22 million.

From the beginning the public, the high rollers and the crooks flooded in. And police were waiting. A dedicated Casino Squad worked in the complex, encouraged and supported by casino executives. Police could see which crooks were flush with cash and who was laundering money.

To disrupt the police presence, some old-style crooks reopened an illegal casino in St Kilda where they could meet unobserved. It failed in weeks.

Police saw Asian loan sharks lend cash to desperate punters. When they couldn’t pay they were forced to fly to Vietnam and smuggle heroin to clear the debt.

In 2006 the Casino Squad was scrapped following a Boston Consulting review into the Crime Department. It was a major misjudgment.

One criticism of Crown was how it was used to launder crime money and looked the other way. Of course it did. Gambling is a no-questions-asked business.

Drug dealer Tony Mokbel’s Tracksuit Gang laundered millions on race tracks and he also invested $20,000 a week on Tattslotto. The Hells Angels used drug money to win $280,000 in the lottery and bookmakers fall over themselves to take bets from crooks.

In May 2005 three Mokbel associates (one was a lawyer, but not THAT lawyer) laundered $100,000 at a casino. But it wasn’t Crown. It was Jupiters in Queensland. 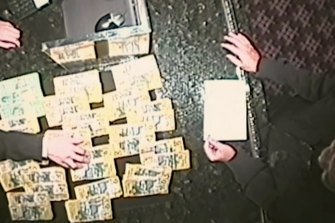 Crown casino surveillance footage presented in a 2019 court case in which a man was prosecuted for money laundering.

The biggest criticism of Crown is how it recruited and serviced whales, chasing them harder than a Japanese research boat.

Before Crown one of the five biggest whales was Akio Kashiwagi, who almost brought down the Darwin Casino.

Visiting Atlantic City he was treated as a VIP at Trump Plaza. The man who would be president, Donald Trump, presented “property developer” Kashiwagi with his book The Art of the Deal.

The whale they called “the Warrior” sat at the baccarat table armed with 17 rows of chips each valued at $US5000 (for a total of $US12 million) betting $US200,000 a hand 70 times an hour until he had more than 3700 chips worth around $US18 million. But he too stayed too long and lost his money, along with $US6 million in credit.

While he lived the life of a billionaire, his legitimate business was modest. He employed a handful of staff and his annual real estate sales wouldn’t cover one hour on the baccarat tables.

In January 1992 a Yakuza hit team hacked him to death in his home with samurai swords. He died owing a fortune to casinos (Trump was out $US6 million). They wanted his business without wanting to know his business.

02/19/2021 World News Comments Off on Too big to fail: the predictable romance between pollies and Crown
Recent Posts