It has been 21 years since Americans have been able to watch the behaviour of their president pulled apart in televised impeachment hearings.

If they were watching this time, they would have seen Donald Trump’s integrity questioned in the dry, methodical assessment of two seasoned diplomatic professionals.

George Kent and Bill Taylor provided chapter and verse on what they saw in dealings between Trump’s White House and Ukraine – their testimony drawn from extensive and exhaustive note-taking at the time.

They alleged military aid and political support had been held hostage to Trump’s demands for an investigation into his political rival, Joe Biden.

They also saw an “irregular” back channel conducting a US shadow foreign policy. Taylor – a Vietnam War veteran and career diplomat – said he was “astonished”, saw the conduct as “crazy” and threatened to resign.

His testimony may prove far more damaging than his resignation.

Kent, a State Department expert on Ukraine, said what he witnessed was “unfortunate” and “unexpected” – damning terms in the cautious world of diplomacy.

Most significant of all was Taylor’s evidence of a direct connection between Trump himself and the push for Ukraine to play ball. 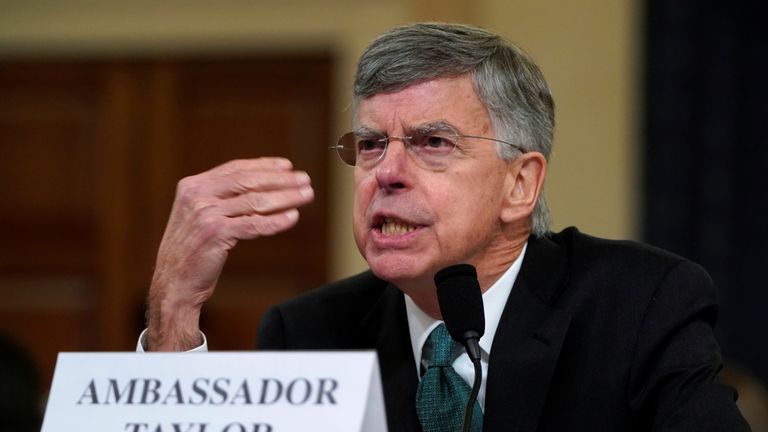 Taken on its face, the evidence was powerful confirmation of the central charge; that Donald Trump abused his position for personal gain.

Yet the chances of the president being removed from office as a result are almost zero.

Republicans tried their best to dent the case against Trump, with little success. But they know they probably won’t be able to stop him being impeached by a Democrat-controlled House if Representatives.

But when that impeachment trial takes place in a Republican-controlled Senate, the Democrats stand little chance of mustering the required two-thirds majority to remove him.

Those leading the impeachment process say such considerations are moot. If they see wrongdoing, they say, it is their duty to take action.

The reality is that the American public will deliver the ultimate verdict at the ballot box in November next year.

What they make of the evidence – and of the Trump presidency in general – will be decisive.

We live in a different media age from the era of previous televised impeachment hearings. It was estimated that 80% of Americans watched those concerning Richard Nixon over Watergate in 1973. Twenty-one years ago it was Bill Clinton who survived a Senate impeachment trial.

Donald Trump probably will as well.

Whether he survives unscathed is a different matter.

Related posts:
11/13/2019 World News Comments Off on Trump may survive impeachment – but voters will deliver ultimate verdict
Recent Posts
We and our partners use cookies on this site to improve our service, perform analytics, personalize advertising, measure advertising performance, and remember website preferences.Ok