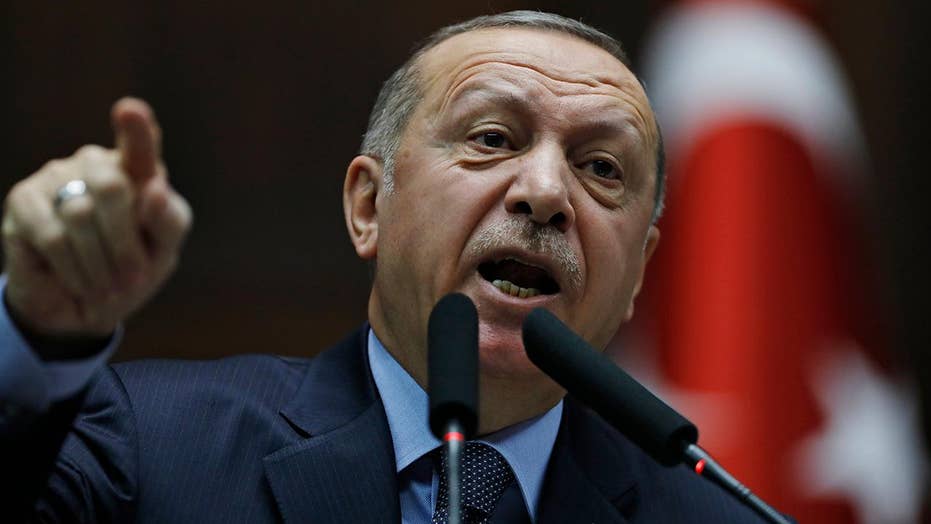 A growing chorus of international bodies and human rights activists are calling on authorities to investigate allegations of sexual, physical and psychological torture of Turkish diplomats while in custody.

“On May 20, four plain-clothed police officers came to my home in order to detain me. No one at the police station mentioned what the accusation was against me, I was just told it was about FETO,” one Turkish diplomat, who requested not to be named for fear of retaliation against family members, told Fox News. “Later, I was taken by three officers and was put on a police coach to be transferred to Ankara, the capital. I was told there were so many accusations against me, only maybe would I see my child’s wedding.”

Turkish state media reported that detention warrants have been issued for 249 foreign ministry personnel suspected of “tampering with the personnel recruitment exam to unfairly recruit and promote” members aligned with the Gulen movement, which Ankara characterizes as a terrorist organization (FETO).

It was determined, according to reports, that “some of the suspects had answered the essay sections in the exam in 2010 with the exact sentences” and that suspects were using the “same expressions” and displayed advanced knowledge of a foreign language in some parts and a primary school knowledge in others.

The diplomat alleged to Fox News that he was suddenly and strangely accused of cheating in ministry exams, along with the terrorism charges. He said that the exam papers, however, have been destroyed – making it impossible to self-acquit. But the mental preparation for the prison was only the beginning of the torment, the ousted official continued.

“After one midnight, police officers took me and my colleagues from the cell. Dragging us by our arms, we entered a dark corridor. We were handcuffed behind our backs and blindfolded with pieces of fabric. They covered our faces with a plastic bag so we couldn’t see their faces,” he alleged. He claims they then proceeded to sexually assault them using truncheons, "all the while, they threatened and insulted us to force us into 'confessing'."

The diplomat-turned-detainee vowed that if they refused to make such an admission, they were threatened with rape.

“It was traumatic not only for me; but for my family. We are still under threat,” he lamented. “Some of those tortured are on the verge of losing their mental health. Some of those who have been conditionally released are under strict surveillance by the police and intelligence.” 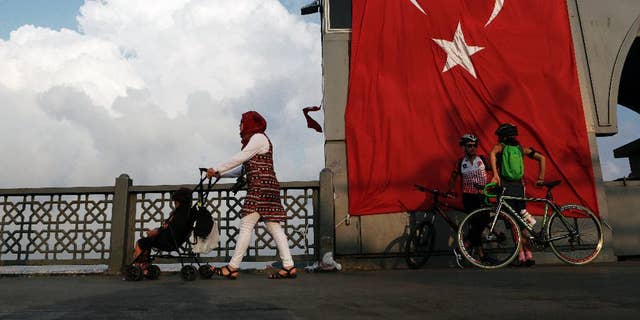 A woman passes with her child by two cyclist as they stand by a giant Turkey flag at the Galata bridge in Istanbul, on Thursday, Aug. 4, 2016. The Turkish government characterizes the movement of Fethullah Gulen, who lives in self-imposed exile in Pennsylvania, as a terrorist organization. (AP Photo/Petros Karadjias)
(The Associated Press)

Late last month, four other Turkish foreign ministry staff claimed that they too were arbitrarily detained and mistreated, according to the Ankara Lawyers’ Bar Association.

Furthermore this week, the Stockholm Center for Freedom and the International Association for Human Rights Advocacy in Geneva, in conjunction with Advocates of Silenced Turkey and Journalists and Writers Foundation, also called on the UN Committee Against Torture (CAT) as well as the Council of Europe, the European Court of Human Rights and the International Criminal Court, to initiate an inquiry into Turkey as the organizations “are convinced there is reliable information containing well-founded indications of serious and systematic violations.”

Amnesty International too has corroborated reports, according to the Sunday Times, and called for the Turkish government to open an independent investigation.

Yet in a statement issued to Fox News, the Ankara Police Department staunchly denied the claims of abuse or maltreatment, insisting that “all procedures within the scope of the said investigation are carried out in accordance with the law.”

“Persons are able to consult their lawyers. There were 545 meetings between the suspects and 130 lawyers. There are official records of all meetings between the suspects and their lawyers. Furthermore, medical reports are issued for these persons every 24 hours. None of these reports suggest a deterioration of their health,” the statement read. “Sharings on social media made by FETO’s social media accounts are, like the ones made before, a result of the uneasiness caused by the targeted operations against it. They are deliberate attempts of the terrorist organization to prevent its members from resorting to repentance and to stop disintegration (of the organization). These baseless allegations should be disregarded.”

Despite the mounting anecdotes of torture, Turkey – which long ago ratified the United Nations Convention against Torture (UNCAT) – has mandated that it has a “zero tolerance” policy toward torture, an approach enforced since Erdogan took office in 2003.

“Turkey firmly upholds the principle of the rule of law,” a Foreign Ministry representative told Fox News. “Arrest and detention procedures are being conducted in accordance with the national legislation that is compatible with international human rights standards. Allegations that question our commitment to eliminate all acts of torture or inhuman treatment are groundless.”

Yet Oguzhan Albayak, a Turkish career diplomat who was dismissed from his post in Baku-Azerbaijan and later the Ministry – accused of Gulen membership – and has since started a non-profit Human Rights Defenders in Germany, contended that his former colleagues in recent weeks endured everything from sexual harassment, forced to undress, and threats of rape, to harsh baton beatings, reverse handcuffing and were knocked unconscious.

“They are accused of trying to infiltrate the State apparat on behalf of the ‘Gulen Movement,’ which is accused of being behind the failed coup,” Albayak said. “But the timing is very curious.”

Some critics question whether deeper politics are at play.

“The detention and torture of former Turkish diplomats came almost three years after their purge in the wake of Turkey’s failed coup attempt, but only a week before their former boss Ahmet Davutoglu’s high-profile public event in Diyarbakir, where he had been expected to announce the launching of a new political party,” noted Aykan Erdemir, a former member of Turkish parliament and now Senior Fellow at the Foundation for Defense of Democracies. “The timing of detentions and the brutal treatment of purged diplomats indicate that the government’s crackdown has less to do with irregularities in Turkey’s foreign service recruitment process, and more to do with intimidating Davutoglu to discourage him from establishing a splinter party that could ultimately undermine Erdogan.” 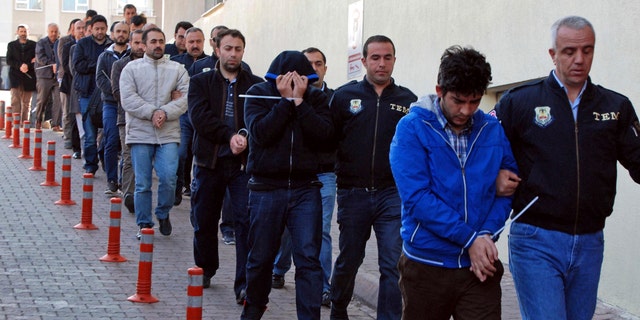 Since a failed coup effort – which claimed the lives of 251 people – to overthrow the Erdogan government almost three years ago, Ankara has cracked down on any dissidence and those suspected of supporting the U.S.-based, exiled cleric Fethullah Gulen, who has denied any involvement. Hundreds of thousands have lost their jobs in the military and civil service, and many have been issued long prison sentences.

Human Rights Watch World Report 2018 documented numerous cases of “torture and ill-treatment in police custody,” underscoring that there were “widespread reports of police beating detainees, subjecting them to prolonged stress positions and threats of rape, threats to lawyers, and interference with medical examinations.”

The 2019 report echoed that “continued allegations of torture, ill-treatment, and cruel and inhuman or degrading treatment in police custody and prison and the lack of any meaningful investigation into them remained a deep concern.”

This week the Geneva-based World Organization Against Torture (OMCT) published an open letter to the Turkish leadership, writing “with a sense of urgency” that Ankara “immediately take all necessary measures to ensure the safety and physical integrity of those still detained and to provide them with immediate independent medical care.”

GET THE FOX NEWS APP

The letter not only references the Ankara Bar Association findings, but of claims that between May 18 and May 21 at least 51 people, including three children, were detained in Halfeti during police raids between soldiers and the Kurdish separatist group PKK and were “pushed to the floor, handcuffed behind their backs, kicked, punched and hit in the butt with weapons” by officers.

“Turkey is party to the relevant UN and Council of Europe treaties that combat all forms of torture and ill-treatment. In accordance with these treaties, we continue to take effective legislative, administrative, judicial and other measures,” the spokesperson added. “The statute of limitations with regard to the offense of torture was fully abolished in 2013, thus enabling more effective investigation. These baseless allegations should, therefore, be disregarded.”

The United Nations Human Rights Office of the High Commissioner did not respond to a request for comment.