UFOS swarming US military warships could be attempting to send mankind a warning over nuclear weapons and World War 3, a former cop turned investigator has claimed.

Gary Heseltine is the vice president of the new International Coalition for Extraterrestrial Research (ICER) which is made up of UFO researchers and scientist from 27 countries.

He told The Sun Online there is a common correlation between UFO sightings and the world's nuclear capabilities – and said the strange encounters could be an attempt to send humanity a message.

"This would seem to indicate that it's as if they're saying 'we don't like nuclear weapons' so they show up.

"Maybe they realise we could destroy this beautiful planet."

Some of the most famous UFO videos in recent years were filmed near the USS Theodore Roosevelt and USS Nimitz, both of which are nuclear powered aircraft carriers.

Mr Heseltine spent six years working with the Royal Air Force police, 24 years with the British Transport Police, and launched a national database for UFO sightings for cops whiles till a serving officer in 2002 – before retiring from the force in 2013 to focus on his research.

US intelligence officials have been ordered to compile a dossier on UFOs for Congress after a flurry of videos filmed by US Navy and Air Force personnel were leaked – and the report is due for release this month.

Strange videos show encounters with objects which appear to defy all conventional understanding of how aircraft move – with the most recent showing 14 UFOS swarming the USS Omaha.

And it comes as NASA admitted they are also taking an interest in UFOs off the back of the bizarre incidents.

Mr Heseltine pointed out often these objects seem to appear over the sea – sometimes appearing to plunge beneath the waves – and the US has even dispatched submarines to investigate them.

He suggested there could be connection between the sea and UFOs, pointing it how little we know about the bottom ocean.

Drawing together the nuclear and underwater theories, Mr Heseltine said: "If you think about it if there was World War 3 and we made toxic all the water then that would affect their habitat.

"That's why I think think there's correlation with water – they have bases and we only know 5% of the ocean."

UFOs – now more commonly referred to in scientific and intelligence circles as Unidentified Aerial Phenomena (UAP) – have stepped from being fringe conspiracy theories to a genuine security concern.

And with eager UFO enthusiasts eagerly awaiting the US report compiled by the US Congress, ICER was formed to highlight the global implications that these UFOs could be "non-human intelligence".

UAPs have become a hot topic issue as the deadline approaches for the report, with more and more US military footage leaking and pressure mounting on governments to come clean.

And so far there are no definitive public answers as to what appears to be happening in our skies.

However, US officials have started taking the unprecedented step of confirming the authenticity of strange videos filmed by warships and warplanes.

And they have admitted they do not know the origin of the unusual objects as calls grow in the US for widespread disclosure to figure out what – if anything – the world's governments are hiding on UFOs.

Competing theories on the strange videos continue to rage – with some grounded on Earth claiming the videos capture never-before-seen military aircraft or drones, while others claim it shows otherworldly craft possibly piloted by aliens.

Others however are more skeptical and sometimes even dismissive, claiming the bizarre videos may just be camera tricks, natural phenomena or even outright hoaxes.

What is going on with UFOs in the US?

UFOS have stepped from fringe conspiracy theories to a genuine national security debate in the US.

Pentagon officials last year took the unprecedented step to release of trio of remarkable videos which showed US encounters with UFOs.

The debate is still open as to what the phenomena caught on film were – but it made clear to everyone, something is in the skies.

Perhaps the most striking was a video known as the “Tic Tac” – which showed an unidentified object being pursued by fighter planes.

The US also confirmed the existence of the Advanced Aerospace Threat Identification Program (AATIP) – a Pentagon programme set up to study UFOs before being disbanded in 2017.

However, it was replaced by the UAP Task Force in June 2020 after a vote by the US Senate Intelligence Committee.

Defence chiefs have since confirmed a number of leaked UFO videos and photos which were submitted to the Task Force for investigation.

Why this sudden rush for transparency?

No outside the secretive wings of the US government currently knows for sure.

And as a tacked on addendum to a 5,500 page Covid relief bill passed in December, the the Director of National Intelligence’s office was ordered to compile a report on UFOs within 180 days.

Former intelligence director John Ratcliffe has hinted the report will be a big deal – and we now just over a month away from its release.

The five month deadline elapses on in June, with some UFO lobbyists claiming it could be the “most profound moment in human history“.

“We know that ultimately this conversation will lead to confirmation that we’re being engaged with some kinds of intelligence that is likely to be extraterrestrial,” Mr Heseltine told The Sun Online.

“Nothing has changed all we have is better technical equipment like video on aircraft so we can pick things up easier, that’s why it’s being seen more.

“We are saying you’ve got to start preparing people for a massive psychological change – whether it’s now or six months or a year’s time everything is pointing to ET or non-humans.

“Through awareness programmes we want to  prepare people for the shock of this new reality on a global scale because 95 per cent of the world is in ignorance about it.

“Seventy years of past history would say they’ve been here all that time, they’re not a threat."

He explained ICER wants to make sure the public are ready for any potentially bombshell revelations on UFO, saying "we should be preparing the world now".

Mr Heseltine added ICER is working towards being an NGO that has United Nations special consultative status. 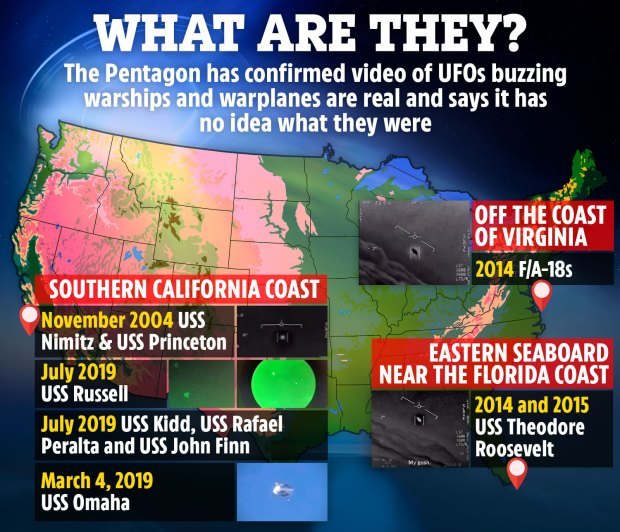 US intelligence services officially closed the book on the phenomena in 1969 at the conclusion Project Blue Book – which stated there was nothing to see regarding UFOs.

However, in the last three years there has been an abrupt turnaround as the Pentagon took the unprecedented step of releasing three stunning UFO videos filmed by the US Navy.

Perhaps one of the most extraordinary interventions came from former US President Barack Obama who sensationally addressed the topic on CBS.

He said: "What is true, and I’m actually being serious here, is that there’s footage and records of objects in the skies, that we don’t know exactly what they are, we can’t explain how they moved, their trajectory

"They did not have an easily explainable pattern. And so, you know I think that people still take seriously trying to investigate and figure out what that is.

"But I have nothing to report to you today."

His comments have only fueled the new desire for openness on the topic of UFOs, with one expert telling The Sun Online he believes "powerful forces" are at work behind the scenes.

And meanwhile, the UK may launch new UFO hunter unit as the US prepares to reveal the UAP report this month.