The UK and South Korea have signed an in principle free trade agreement that will allow businesses to continue trading freely after Brexit.

Trade is up by an average of 12 per cent every year since the EU-Korea Free Trade pact was agreed in 2011.

The agreement aims to maintain stability after Britain leaves the European Union – even in a no-deal scenario – and means businesses will be able to carry on trading on preferential terms with Korea.

‘This means that whatever happens with #Brexit, there will be total continuity in trade between our two countries AND the basis for an ambitious future FTA when we leave the EU,’ Mr Fox tweeted.

UK-Korean trade was worth £14.6 billion in 2018 and has increased by an average of 12 per cent per year since the EU-Korea Free Trade agreement was signed in 2011. 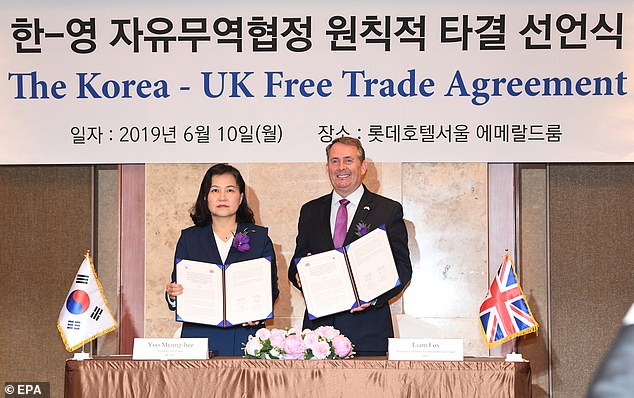 There were 6,900 British VAT-registered businesses exporting goods to Korea in 2017, with 5,400 British businesses importing Korean goods to the UK.

Mr Fox said: ‘The value of trade between the UK and Korea has more than doubled since the EU-Korea agreement was applied in 2011.

‘Providing continuity in our trading relationship will allow businesses in the UK and Korea to keep trading without any additional barriers, which will help us further increase trade in the years ahead.

‘As we face growing global economic headwinds, our strong trading relationship will be crucial in driving economic growth and supporting jobs throughout the UK and Korea.’

The agreement will be formally signed once it has been subject to formal checks. 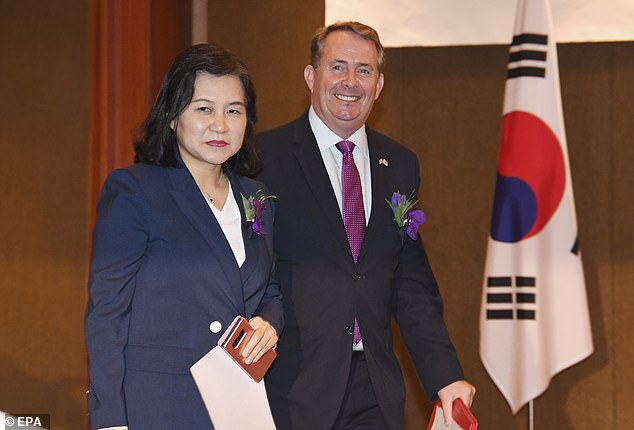