The United Kingdom’s parliament is preparing to vote on the Brexit deal agreed between British Prime Minister Boris Johnson and the European Union.

The 650-seat House of Commons’ so-called “Super Saturday” session is expected to deliver a knife-edge decision on the revised withdrawal agreement.

But Johnson’s opponents have laid a parliamentary booby trap that could yet frustrate his plans and force him to send members of parliament home without voting on his deal, forcing a further Brexit delay.

Amid the high political drama, the clock continues to tick towards the UK’s scheduled departure from the EU on October 31, now less than two weeks away.

Here are the latest updates:

Labour to back Letwin amendment

Britain’s main opposition Labour Party will support a proposal made by former Conservative MP Oliver Letwin to withhold support for Johnson’s Brexit deal until the formal ratification legislation has been passed by parliament.

A Labour spokeswoman said the party was backing the amendment to “stop Boris Johnson from sneaking through a no deal crash out … and to stop a blackmail vote between his sell out deal and no deal”, the Reuters news agency reported.

The battle over Brexit spilled onto the streets of London, where thousands of people gathered to demand a new referendum on the UK’s departure from the EU.

Protesters waving EU flags and carrying signs calling for Brexit to be halted gathered at London’s Park Lane ahead of a planned march through the centre of the capital to parliament.

“I fervently believe that we should remain in the EU,” Bruce Nicole, one of those demonstrating, told The Associated Press news agency. “I am British but I am also European. I don’t believe the current deal offers any benefits at all.”

The British government is focused on making sure legislators do not back a proposal to withhold support for Johnson’s Brexit deal until formal ratification legislation has passed, Reuters quoted the prime minister’s spokesperson as saying.

If the amendment, put forward by former Conservative MP Oliver Letwin, is accepted, parliament will not get to vote on Saturday on whether to approve Johnson’s withdrawal agreement.

“We want Members of Parliament to have the opportunity to vote on the deal,” the spokesman said. “Our focus is on making sure that the Letwin amendment isn’t passed.”

Al Jazeera’s Paul Brennan, reporting from Westminster, said Johnson’s “centre of operations” had confirmed the government will pull the vote on his deal if the amendment to the motion put forward by Letwin passes.

The amendment, if passed, would force Johnson to request an extension to Brexit by the end of Saturday. It is backed by a cross-party alliance of opposition MPs.

“This amendment would force a delay until legislation can be passed actually implementing the deal,” Brennan said.

“It’s a rather technical amendment, but it’s designed to prevent the government pulling any fast ones with MPs and going accidentally-on-purpose to a no-deal Brexit on October 31,” he added. 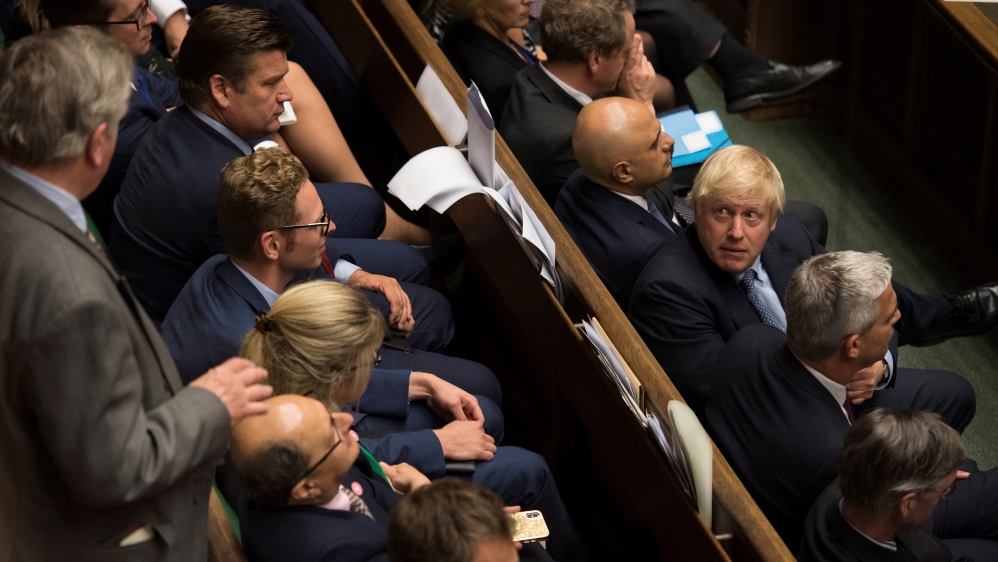 “This deal would be a disaster for working people,” he said, adding it was “even worse” than the one it replaces, which was negotiated by Johnson’s predecessor, Theresa May, and rejected three times by parliament.

“Voting for a deal today won’t end Brexit. It won’t deliver certainty and the people should have the final say,” Corbyn said.

He had earlier reiterated that Labour MPs would vote against the revised withdrawal agreement in a post on Twitter.

Steve Baker, the head of a hardline Brexit faction in Johnson’s Conservative Party, has told his European Research Group (ERG) eurosceptic allies that they should vote for the prime minister’s Brexit deal.

“Vote for Boris’s deal in the national interest,” Baker told ERG members in a post on Twitter.

1. vote for Boris’s deal in the national interest

2. support the legislation to completion in good faith, provided it is not spoiled by opponents of Brexit

3. vote with Boris throughout to give him maximum opportunity to deliver for our country https://t.co/WKPwBP5Yz8

UK has no intention of asking for longer Brexit transition, minister says

Britain has no intention of extending the transition period that follows Brexit past the current December 2020 end date, Brexit minister Stephen Barclay said.

“We have no intention of going beyond December 2020,” Barclay told BBC News.

Asked if Prime Minister Boris Johnson would ask the European Union to delay Brexit past the current October 31 deadline if the law required it, Barclay said Johnson would comply with the law.

Johnson’s Northern Irish allies will consider backing an amendment which would delay any immediate decision on the British prime minister’s Brexit deal when it comes before parliament.

“Were going to look at that very closely,” Nigel Dodds, deputy leader of the Democratic Unionist Party (DUP), told BBC radio when asked if they would support the amendment put forward by expelled Conservative lawmaker, Oliver Letwin.

The DUP had already said it would not vote in favour of the deal because of its customs implications for Northern Ireland.

Related posts:
10/19/2019 World News Comments Off on UK Brexit showdown: All the latest updates
Recent Posts
We and our partners use cookies on this site to improve our service, perform analytics, personalize advertising, measure advertising performance, and remember website preferences.Ok