UK economy will grind to halt next year with worst performance in the G20 except for sanctions-crippled RUSSIA, warns OECD

The UK economy is set to grind to a halt next year with the worst performance in the G20 except for Russia, an international think-tank warned today.

The OECD painted a grim picture of the impact of the Ukraine war as it revised global growth down dramatically and jacked up inflation forecasts.

But it highlighted the effects of soaring inflation in Britain – due to reach double-digits by the end of this year – and the government’s tax increases squeezing households.

It downgraded growth estimates this year from 4.75 per cent to 3.64 per cent, while in 2023 GDP is expected to flatline.

Only Russia, which has been hammered with sanctions over Vladimir Putin’s invasion, is slated to fare worse among the wealthiest group of countries, with a 4.1 per cent contraction. 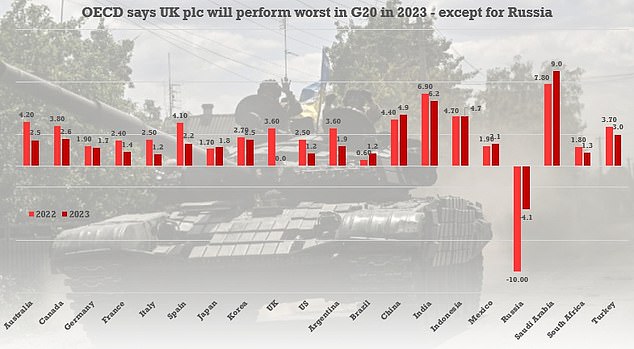 The OECD downgraded UK growth estimates this year from 4.75 per cent to 3.64 per cent, while in 2023 GDP is expected to flatline 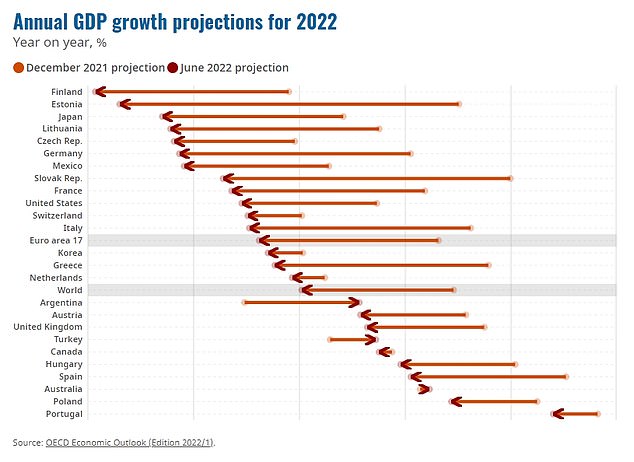 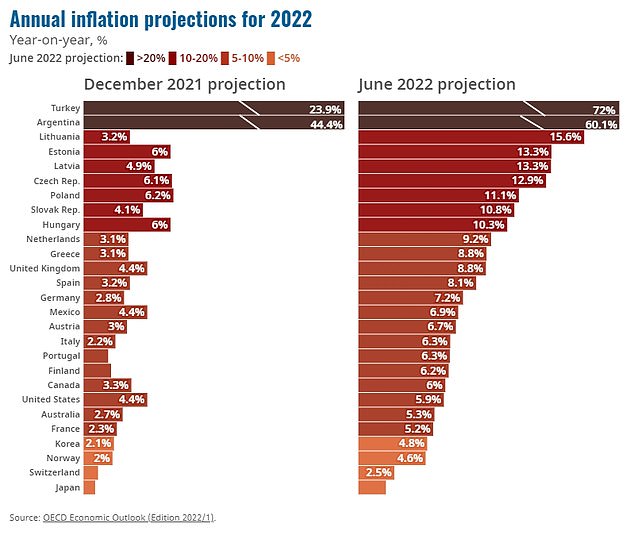 Inflation has been soaring around the globe and is expected to average 8.8 per cent in the UK this year

‘The other thing is there is fast monetary tightening which is obviously responding to (inflation) and there is fiscal consolidation which is the highest in the G7.’

The update said there were ‘considerable risks’ to the UK outlook.

‘Spill-overs from economic sanctions and higher than expected energy prices as the Ukraine war drags on, and a deterioration in the public health situation due to new COVID strains are significant downside risks,’ it said.

‘Higher than expected goods and energy prices could weigh on consumption and further lower growth.

‘A prolonged period of acute supply and labour shortages could force firms into a more permanent reduction in their operating capacity or push up wage inflation further. A progress in trade deals could support trade and improve the outlook.’

The OECD said the world economy is set to grow 3 per cent this year, much less than the 4.5 per cent expected in December.

Growth will then slow further next year, to 2.8 per cent, down from a previous forecast of 3.2 per cent.

Meanwhile, any quick relief from price hikes is unlikely, with inflation expected to peak at 8.5 per cent this year in OECD countries before dipping to 6 per cent in 2023.

Previously the OECD had expected inflation to peak at 5 per cent before gradually receding to 3 per cent in 2023.

Despite the lower growth and higher inflation outlook, the OECD played down the risk of stagflation similar to that seen in the mid-1970s, when the oil price shock triggered runaway inflation and surging unemployment.

It said developed economies, which are much more driven by services than in the 1970s, are less energy-intensive now and central banks have a freer hand to fight inflation, independent of governments more concerned about unemployment.

China’s economy, which has been hit by a fresh wave of COVID-19 lockdowns, was predicted to grow 4.4 per cent this year and 4.9 per cent next.

That was down from the previously-estimated 5.1 per cent in both years.

The euro zone, which is exposed to Russian energy imports and the fallout from the war in Ukraine, is expected to grow 2.6 per cent this year and 1.6 per cent in 2023 –  down from forecasts of 4.3 per cent and 2.5 per cent respectively. 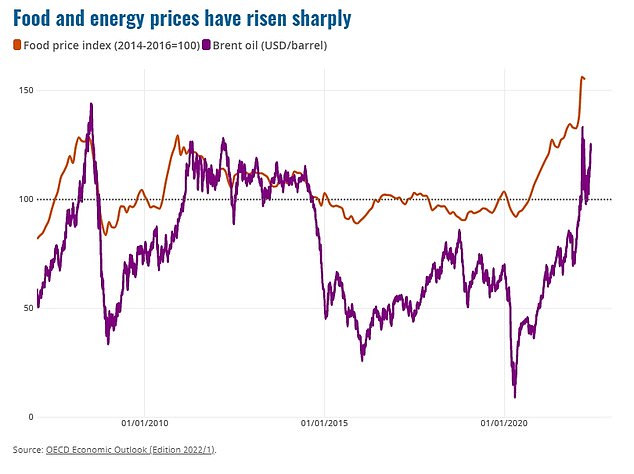