Thunder and lightning will strike across Britain today ahead of a heatwave due to hit the country this week. Already this morning, parts of Carlisle down to Penrith are reporting lightning strikes, stretching across to the North Pennines with some reports in the Lake District. Express.co.uk will bring you the latest lightning maps and weather forecast updates below.

The Met Office has issued weather warnings across the majority of the UK for Monday.

Tuesday sees the warnings continue for the southeast, but learning up elsewhere.

While sunnier climes aren’t far behind, the Met Office is urging those in the warning zones to take care of what could become very severe thunderstorms in places.

Along with the rain and thunderstorm warnings, Heat Health alerts have been issued in conjunction with Public Health England. 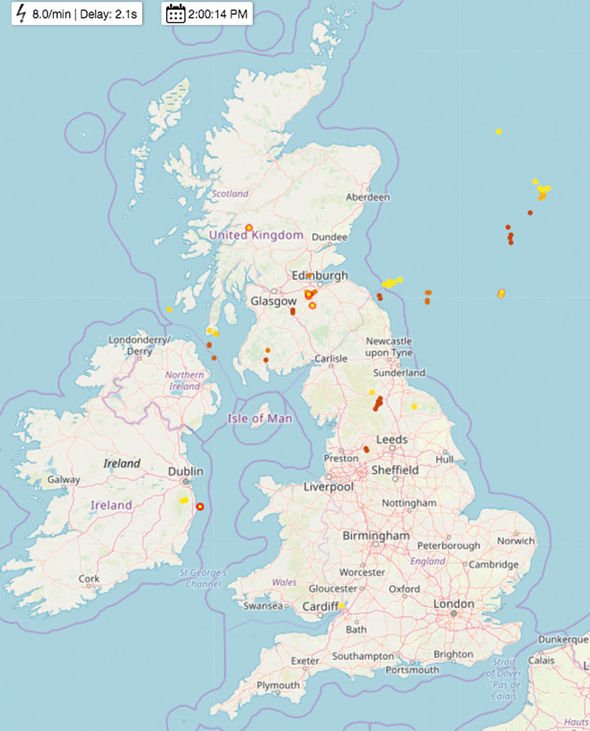 Met Office Chief Meteorologist, Dan Suri, said: “It’s going to feel much hotter for most areas across the UK this week.

“Our latest forecasts show the highest temperatures are expected towards the end of the week.

He said these are “most likely across central and southwest England, where temperatures could rise into the low 30s Celsius.

“This will be in stark contrast to the low temperatures we’ve had so far this June.

“It’s also going to feel humid and quite muggy – especially at night time – as temperatures could remain in the high teens or low 20s Celsius in places.” 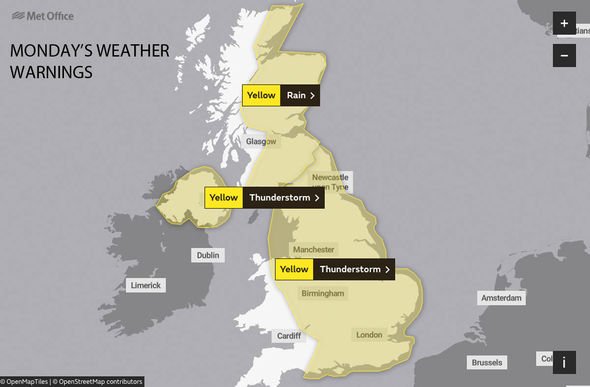 This humid, muggy weather is ideal for brewing storms, with flash flooding a concern.

Mr Suri said: “Whilst some places within warning areas could miss thunderstorms altogether and enjoy a warm, bright day, where they do develop torrential downpours, hail, lightning and gusty winds are likely.”

He added a few spots could see as much as 2.5 inches of rain in one hour, an unusual amount of rainfall for the UK in June.

He added: “With the potential for a large volume of water in a short time, there is a significant risk of flash flooding, fast flowing or deep flowing water causing danger to life and very difficult driving conditions in places.”

This sudden shift from colder weather comes thanks to a shift in the ‘omega blocking pattern’ in the north Atlantic which has kept the UK stuck under an area of low pressure. 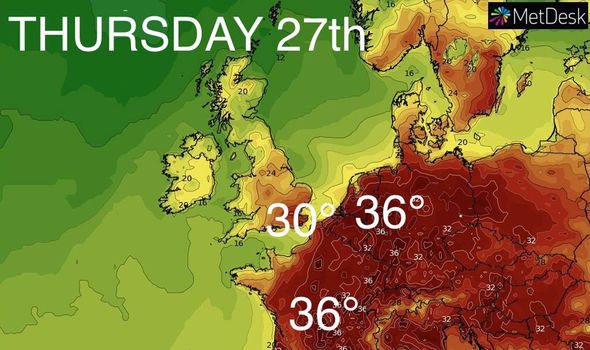 Over the next few days, this omega block will shift slightly, nudging the centre of the low pressure to the southwest of the UK.

This small change will allow very warm air to be drawn upwards from southern Europe and north Africa towards northern Europe, the UK and Ireland.

High temperatures are expected across parts of western Europe.

Record-breaking June temperatures are possible in countries including France, Germany and the Netherlands.