Low pressure is expected to blast snow in Scotland over a 16-day period, starting from tonight and lasting until Tuesday, January 12. The heaviest snow fall is forecast to reach 54cm (21 inches) on Saturday, January 9 in central Scotland, according to WXCHARTS. Snow levels could reach 31cm (12 inches) in Scotland tonight, before rising to 37cm (14inches) tomorrow.

North western regions including Carlisle could also see a couple of inches of snow during this period, the maps suggest.

Temperatures are expected to drop as low as -9C on Thursday, December 31 in central Scotland.

This bitter low could linger until the following day before temperatures slightly rise to -7C in Scotland by Saturday, January 2.

Scotland will continue to experience freezing lows of -5C on Monday, January 4. 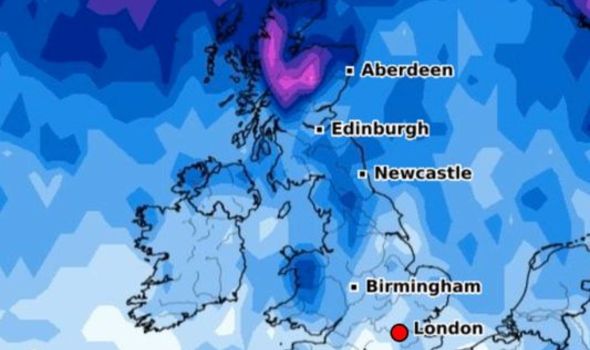 Parts of England are also forecast to experience sub-zero lows over the next week, with -2C expected to hit Liverpool on January 4.

Southern regions including London and Surry are likely to average 0C on this day.

Nick Finnis at Netweather warned of the weather having “wintry flavour” over the coming period.

He added low pressure will sweep over from Tuesday, bringing sleet and snow. 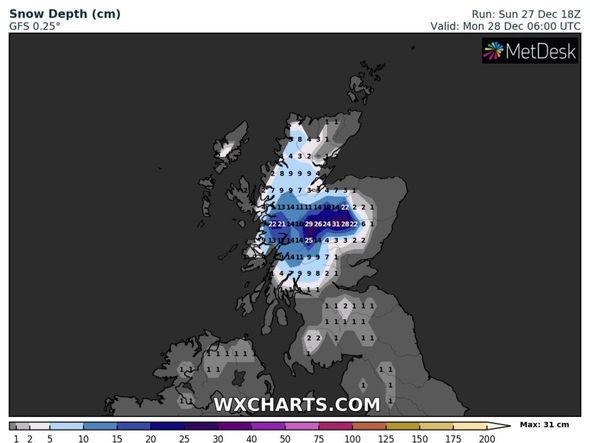 Mr Finnis said: “Low pressure to the east over the North Sea and high pressure way to the west will bring a cold northerly flow across the UK on Tuesday.

“An area of sleet and snow, rain on coasts, pushing south across Midlands, Wales and southern England during the morning, giving a few centimetres in places, otherwise many inland places having a dry day with bright or sunny spells, western, northern and eastern coastal areas seeing further showers, wintry over hills inland.

The BBC’s long-range forecast between Monday January 4 and Sunday, January 17 added cold air from the Arctic could arrive. 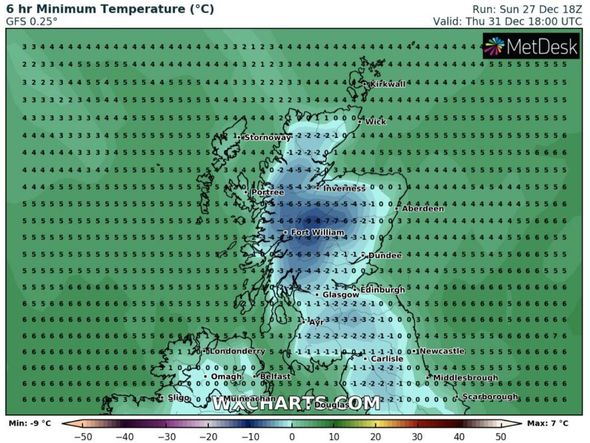 The forecast said: “It seems increasingly likely that the low pressure track will still be displaced to the south of the UK, while high pressure intensifies to the north, near Iceland and Greenland.

“This pressure pattern will cause the winds over the UK to blow from the north quite regularly, feeding in air from the Arctic and cutting off our normally mild south-westerly winds.

“We need to look across to the Pacific Ocean and a huge and persistent area of low pressure over the far northern Pacific.

“There is a strong jet stream associated with this low pressure area too – a narrow ribbon of high altitude wind, blowing from west to east. 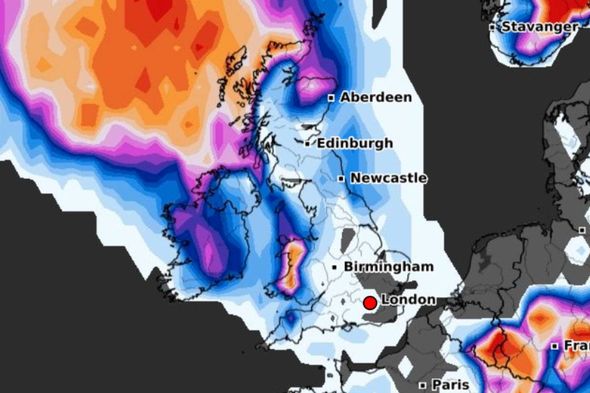 “As this jet stream reaches the strong north-south barrier of the Rocky Mountains, it sets up a weaker and more wavy jet stream downstream over the USA, North Atlantic and into Europe.

“This is leading to the colder weather patterns over the UK western Europe.

“Therefore we should expect more chilly weather with some sleet and snow in places, especially over central and northern areas of the UK and over the hills.

“But even the south will be at risk of some snow, along with some rain and sleet. Drier days too, with sharp night frosts.”

The forecast said: “Mixed conditions are likely during the beginning of this period.

“It will be dry at times, more so in the west, with intervals of rain, sleet and snow more likely affecting northern and eastern coastal areas. Significant accumulations of snow are likely to be over higher ground, but there is also a chance of snow falling down to lower-level areas inland.

“There is a possibility of drier and more settled conditions developing during this period, primarily across northern parts of the UK, and across areas in the west near the end of the period.

“At times it will be windy, particularly in western parts at first. Temperatures are likely to be low, feeling cold or even very cold, bringing a risk of frost, ice, and freezing fog.”

12/28/2020 World News Comments Off on UK long-range forecast: 21 INCHES of snow to blitz Britain as bitter -9C Arctic blast hits
Recent Posts
We and our partners use cookies on this site to improve our service, perform analytics, personalize advertising, measure advertising performance, and remember website preferences.Ok