The UK manufacturing sector grew at its fastest rate ever in May amid more signs the economy is bouncing back from coronavirus chaos.

That topped the previous record of 61 set in 1994 – with anything above 50 in the index representing expansion.

Despite the stellar number, some analysts had thought it could be even higher as the economy surges after the catastrophic impact of lockdown restrictions.

The latest boost for Rishi Sunak comes after the OECD revised its forecast for UK GDP growth to 7.2 per cent this year and 5.5 per cent in 2022, hailing the success of the vaccination rollout.

However, fears are growing that the lifting of restrictions on June 21 could be delayed amid a rise in infections driven by the Indian variant.

Commenting on the latest PMI figures, IHS Markit director Rob Dobson said: ‘The UK PMI surged to an unprecedented high in May, as record growth of new orders and employment supported one of the steepest increases in production volumes in the near 30-year survey history.

‘Growth is being boosted by the unlocking of economies from COVID restrictions and ongoing vaccination programs. This is being felt across the globe, as highlighted by a record rise in new export business during the latest survey month.’ 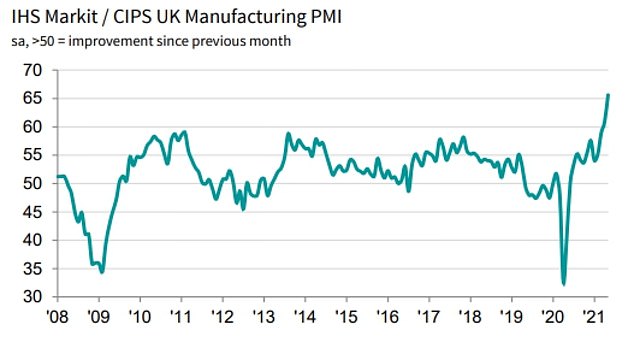 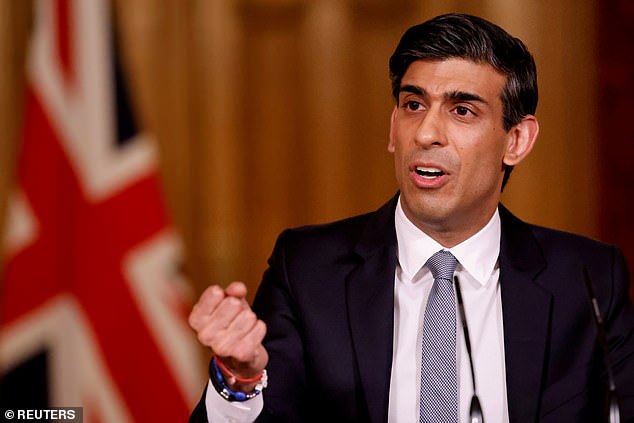 The OECD expects UK GDP growth to be 7.2 per cent this year and 5.5 per cent in 2022, due to the success of the vaccination rollout and the easing of lockdown restrictions

Sarah Banks, Managing Director of Freight and Logistics at Accenture Global struck a more cautious note, saying ‘business optimism is not without its challenges’.

‘Material shortages and shipping delays are still being widely reported, leading to significant backlogs of uncompleted work as firms struggle to boost operating capacity to accommodate the surging inflows of new orders,’ she said.

‘This has caused shipping and air freight rates and selling price inflation to run significantly above anything previously seen.

‘With the economy rebounding faster than expected, manufacturers will likely feel supply chain pinch points that have only bubbled below the surface of global trade to date.’

The OECD said yesterday that UK growth was being driven by a ‘rebound of consumption, notably of services’, and GDP is expected to return to pre-pandemic levels in early 2022.

That would put the recovery on a par with Canada and Italy, ahead of France but behind Germany, Japan and the United States.

Although it gave a positive assessment of the rebound, the OECD said the UK could still face the biggest decline in potential output growth on average among the G7 group of countries – compared to relatively small losses in Japan, Canada and the United States.

‘Declines in potential output growth in major euro area members could be 0.3 percentage point per annum on average over 2019-22,’ it said.

‘The United Kingdom could suffer the biggest reduction amongst G7 countries (a decline of 0.5 percentage point per annum), in part reflecting the additional adverse supply-side effects from 2021 following Brexit.’

Mr Sunak said: ‘The strength of the UK’s growth forecast is testament to the ongoing success of our vaccine rollout and evidence that our Plan for Jobs is working.

‘It is great to see some early signs that the UK is bouncing back from the pandemic, but with debt at nearly 100 per cent of GDP, we must also ensure public finances remain on a sure footing.

‘That’s why at the Budget in March I set out steps we will take to bring debt under control over the medium term; ensuring our future recovery is sustainable.’

The OECD also warned that the worldwide recovery is at a ‘critical stage’, and that this could be uneven due to disparities in vaccine distribution globally.

‘Keeping up the pace of vaccinations and responding to emerging virus mutations are key challenges going forward,’ the forecast added.

In terms of the global outlook, it has revised up its growth projections across the world’s major economies since the last full outlook in December of last year, putting global GDP growth at 5.8 per cent this year.

Chief economist Laurence Boone said that the OECD’s latest projections could give ‘hope’ to people in countries hard-hit by the pandemic, who may soon be able to return to work and begin living normally again.

He added: ‘But we are at a critical stage of the recovery.

‘Vaccination production and distribution have to accelerate globally and be backed by effective public health strategies.

‘Stronger international cooperation is needed to provide low-income countries with the resources – medical and financial – required to vaccinate their populations.

‘Trade in healthcare products must be allowed to flow free of restrictions.’ 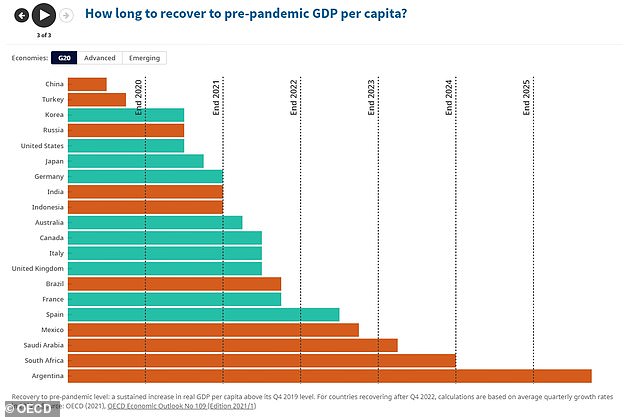 The transnational organisation said that growth was being driven by a ‘rebound of consumption, notably of services’, and that GDP is expected to return to pre-pandemic levels in early 2022.