Met Office meteorologist Alex Deakin forecasted some mist and murk in some regions, but “for some, most of the weekend will be sunny”. He added that southerly winds are the reason why it is turning “milder”.

Mr Deakin said the main issue overnight was the mist and fog “thickening up” in some areas including parts of northeast England.

He warned of mist and low clouds in the south causing poor-visibility, particularly “over the higher routes”.

Temperatures are set to drop down to single figures across the north of Britain and rural areas, which will see some frost along with the low temperatures.

But the afternoon sunshine will cause the temperatures to increase into the double digits this weekend. 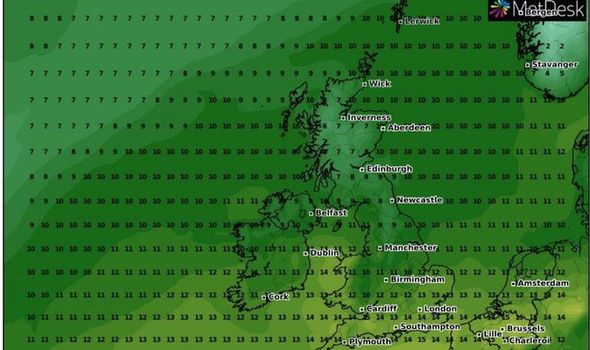 BBC’s long-range weather forecast shows increasingly “frosty nights and cold days” towards the middle and end of the month.

The BBC’s prediction from Monday 16 November to Sunday 29 November forecasts “warmth lingering” before “a chance of colder air later”.

It also warns of “the potential for wintry showers” in cold days and even lower temperatures in the evening.

The BBC stated: “Low pressure systems should be steered southwards over Scandinavia and eastern Europe, pulling down pulses of colder air towards the UK. 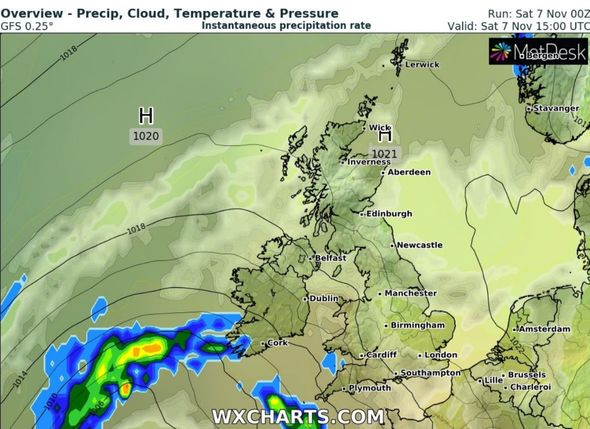 “This increases the likelihood for some frosty nights, cold days and the potential for wintry showers but brief milder, wet and windy spells in between.”

It added: “There are a couple of possible alternate scenarios.

“One is that the Polar Vortex remains strong and induces more of a westerly regime with low pressure systems bringing occasionally wet and windy but mild weather across the UK.

“This is about a 30 percent chance. 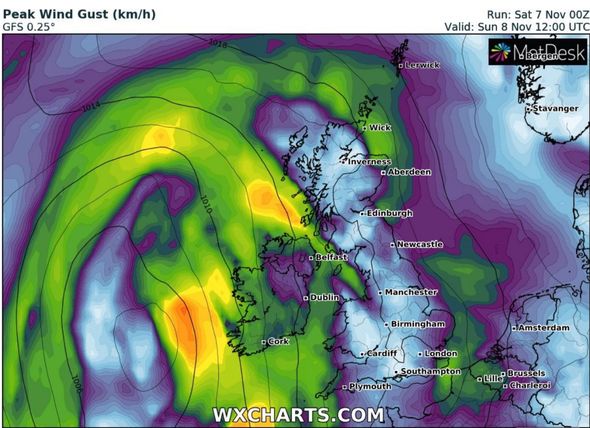 “On the other hand, there is a very small risk, no more than 10 percent, of high pressure building over Scandinavia and bringing much colder easterly winds.”

A previous forecast said the UK was set for of “a change…later in the month as the high-pressure system weakens and re-establishes westwards as a ridge over the Atlantic by the end of the month, inducing chilly flows from the north”.

It added: “The most likely scenario is for warmer and drier than average conditions to continue across most of the UK.

“Occasional rain cannot be ruled, especially for the north and west.” 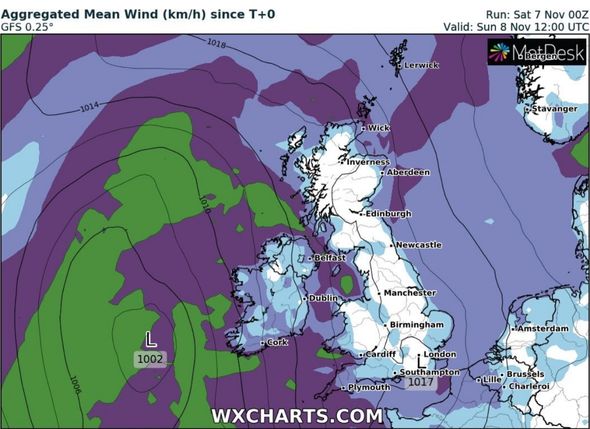 It read: “Pressure will tend to fall to the north of Britain during this period bringing increasingly unsettled weather. Winds will again tend to be west to northwesterly early in this period, with temperatures generally a bit below the seasonal average, with potential for snow on high ground, but probably only rain at low levels.

“There are hints that towards the end of this period it may turn milder with a west to southwesterly type and lowest pressure heading towards Iceland rather than Scandinavia, but confidence in this is low at this range.

“Rainfall totals are thus expected to be above normal over much of the UK during this period, with temperatures coming out near to slightly below normal, though there is some uncertainty over this, depending on the extent of any milder weather late in the period.

“Sunshine totals will tend to be above normal early in the period, trending below normal later on, so overall most of the UK will end up with near or slightly above average sunshine.”

11/07/2020 World News Comments Off on UK weather forecast: Britain braces for biting cold and frost as winter approaches
Recent Posts
We and our partners use cookies on this site to improve our service, perform analytics, personalize advertising, measure advertising performance, and remember website preferences.Ok