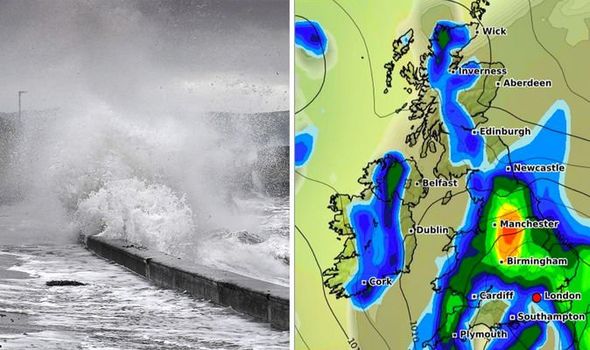 Meteorologist Marco Petagna said:”I’m afraid we’ve got a rather unsettled week ahead weather-wise across the UK. The rain will never be too far away and temperatures will be quite disappointing for this time of year also. Low pressure spiralling close by to the UK will see weather fronts moving in at times from the south and west bringing showers or longer spells of rain.”

towards the northwest as being quite heavy and persistent.

He added: “There will be rain across some western parts of Scotland, feeding across the north and west of Northern Ireland and then south and east.”

Mr Petagna described the rest of Monday as having some breaks in the rain but there will be heavy showers that will push eastwards and southwards coming from Scotland and Northern Ireland. 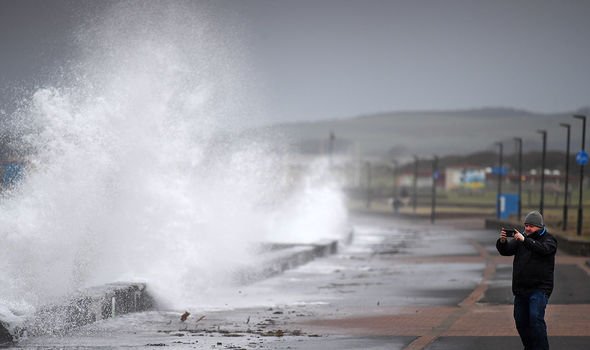 Temperatures on Sunday did push into the high 20s, but by Tuesday the gauge will drop and the cold will begin to seep in.

Mr Petagna said: “The brisk southwesterly winds on Tuesday will see a mixture of sunshine and showers and some of the showers will be quite hefty in nature.

“The more persistent outbreaks of rain will work their way in across many parts from the east and the south.

“On Tuesday afternoon the temperatures will again be no better than average.” 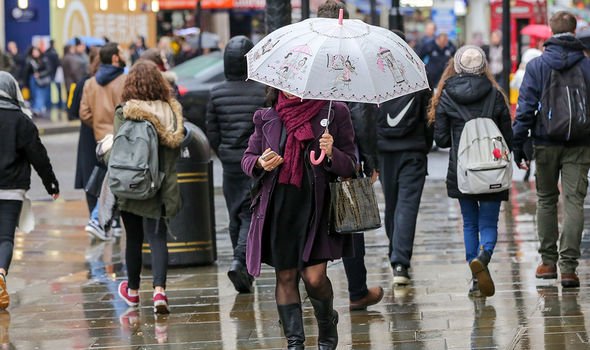 Mr Petagna went on to say that the cold front will continue eastwards with some thunderstorms and rain clearing out into the North Sea.

On Tuesday there may be a few thundershowers close to the southeast of England.

Many central and western areas will end the day with outbreaks of rain.

However, a swirl of cloud close to Northern Ireland could bring some very strong winds to the coast which may spread to southwest Scotland.