Temperatures continue to rise to the mid-30s this week, as the sizzling sunshine and high temperatures make for uncomfortable working from home conditions. The mercury reached 35.5C on Monday at Heathrow, marking the fourth day temperatures have risen to 34C or higher. The scorching temperatures are set to rise even further on Wednesday, with 38C forecast in the capital.

But the heatwave is set to be accompanied by heavy storms, including lightning and hail, as the humid air creates the perfect conditions for thundery outbreaks.

Netweather forecasters highlight there are already signs of “mid-level instability” in the south east today.

Senior forecaster Jo Farrow noted heavy downpours were seen in Wales, North West England and Scotland overnight, with high storm risks today across the Midlands and the north of the UK.

She writes: “Once more we have pulses of heavy showers with thundery outbreaks drifting north and later in the day further storms breaking out. 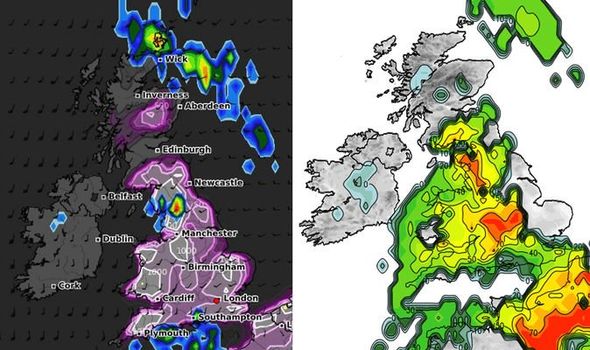 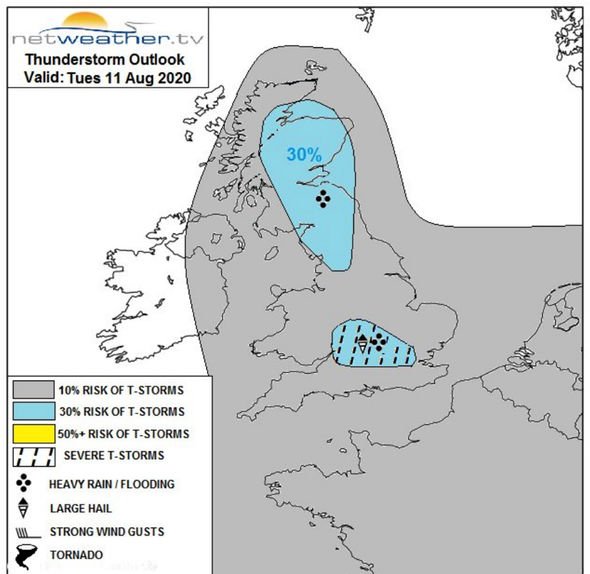 “There is very warm, humid air and forcing present for elevated storms.

“The overnight action can still be seen over Scotland, edging northwards this morning.”

A weather map highlights where the storms are expected, with “frequent lightning, hail and torrential rain leading to localised flooding” forecast for Scotland, the Isle of Man and Cumbria.

Severe thunderstorms, large hail and heavy rain is also forecast in parts of England, as shown in the chart. 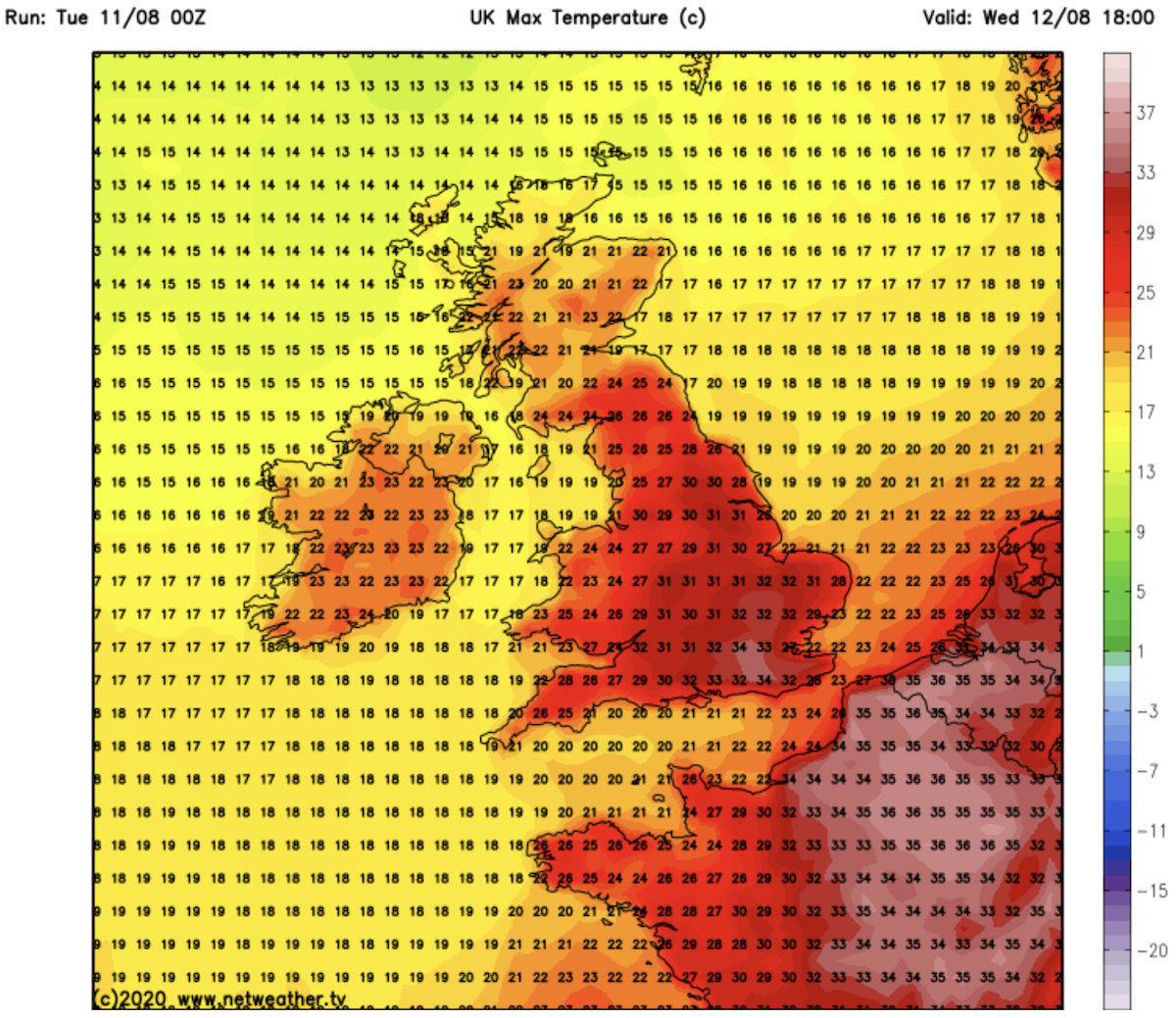 The Netweather forecast said “a cluster of storms” are expected in eastern Scotland into Orkney tonight.

She also points out air pollution levels will be fairly high in the south on Tuesday.

The senior forecaster said: “There is hardly any breeze today, with high pressure away to the south we have stagnating air and the pollution is building.

DON’T MISS:
UK storm warning: Why does it thunder after hot weather? [INSIGHT]
Swollen ankles and feet: Why do ankles swell in hot weather? [DETAILS]
How to sleep on a hot night [ANALYSIS] 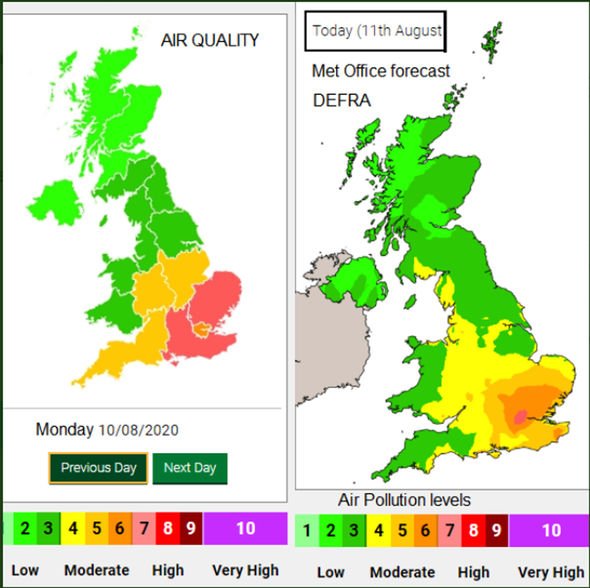 “The humidity will fade in the north by Thursday and the heat should ease at the weekend further south.”

Stormy conditions are also forecast for Wednesday, when temperatures could soar to a record-breaking 38C.

Ms Farrow said: “Again storms break out in the sunshine over England, Wales and southern Scotland but later in the day more energetic convective action is forecast over SW Britain and southern England which extends to more of England and Wales on Thursday, perhaps southern Scotland, but Northern Ireland continues with a relatively charmed spell, missing most of the downpours. 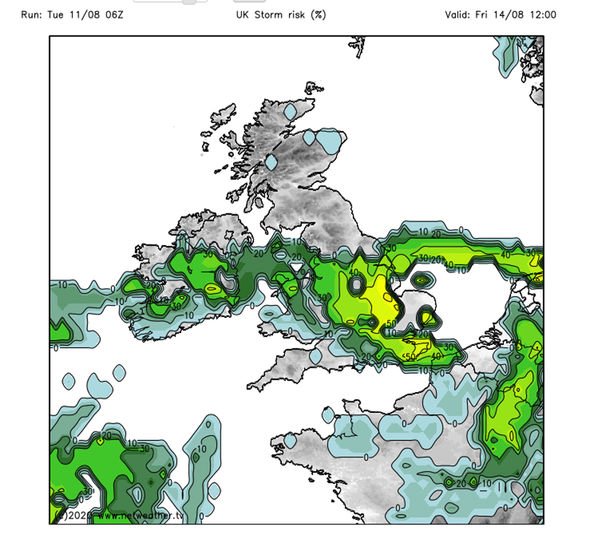 “Southern Ireland joins the severe thunderstorm risk on Thursday too.”

Weather maps also show the storm risk persists for much of the UK on Friday, though Scotland and Northern England may avoid the bulk of the thundery, wet conditions.

The Met Office has a yellow weather warning in place covering virtually the entirety of the UK on Tuesday and Wednesday.

So far the thunderstorm risk has been reduced on Thursday, only covering England and Wales.

The forecasters warn the storms “could be significant and disruptive” and could spell torrential rain, hail, frequent lightning and strong gusty winds.

08/11/2020 World News Comments Off on UK weather warning: New severe lightning alert issued as storms to rage till FRIDAY – maps
Recent Posts
We and our partners use cookies on this site to improve our service, perform analytics, personalize advertising, measure advertising performance, and remember website preferences.Ok