Ukraine: Fire at the Satelit plant in Mariupol

Olexander Scherba, who served as Kyiv’s ambassador to Austria, took to social media to express his concern about Mariupol. The Donetsk Oblast city, which is located on the north coast of the Sea of Azov, was a prime target for Russian forces after Vladimir Putin launched the Kremlin’s invasion on February 24.

It has been reported Russian “occupiers” have been considering bulldozing Mariupol for some time.

The Washington Post even claimed Russian forces were clearing debris from a bombed-out theatre which had served as the city’s main shelter ahead of a parade back in May.

However, in his recent comments about the city, Mr Scherba claimed Russia was acting as if residents “never existed”.

Mr Scherba said: “Now the occupiers say many buildings in Mariupol can’t be salvaged & smell bad – so they just bulldoze them to the ground.

JUST IN: Putin issues chilling warning to the West as he offers deadly ‘modern weapons’ to ‘allies’ 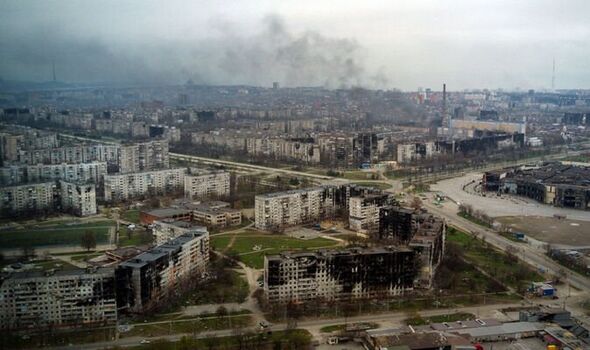 “Which means we won’t even know who died where.

“People are vanishing with their homes. As if they never existed.”

In a post on Twitter in April, Kyiv said: “Mariupol had lived in peace before Russia invaded, ruined 95 percent of the city by heavy bombardment, and killed thousands of people.

“So are thousands of civilians, including kids and elderly. People lack food and water.”

A recent Ministry of Defence (MoD) intelligence update also provided some insight into ongoing events in the Donetsk Oblast region.

The MoD said: “Over the past week, Russia’s priority has likely been to re-orientate units to reinforce southern Ukraine. 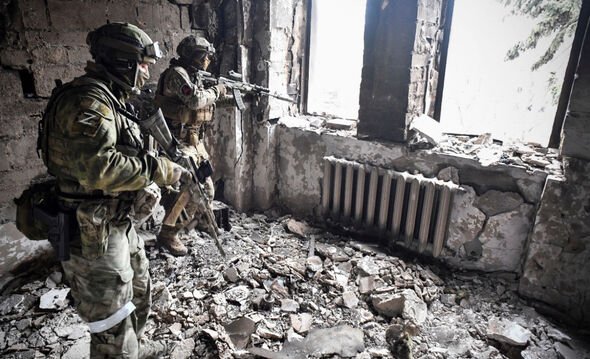 “However, in the Donbas, Russian-backed forces – largely militia of the self-proclaimed Donetsk People’s Republic – have continued to attempt assaults to the north of Donetsk city.

“Particularly heavy fighting has focused on the village of Pisky, near the site of Donetsk Airport.

“The settlement probably remains contested. The area has been on the front line of the Donbas Line of Control since 2014.

“The Russian assault likely aims to secure the M04 highway, the main approach to Donetsk from the west.”