United Nations: The United States and other western countries have objected to a visit by the United Nations counterterrorism chief to China's remote Xinjiang, where UN experts say some one million ethnic Uighurs and other Muslims are held in detention centres. 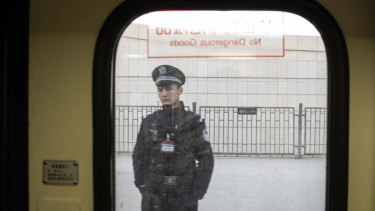 A police officer is seen through a train window in Turpan, Xinjiang, last year.Credit:Bloomberg

Vladimir Voronkov, a veteran Russian diplomat who heads the UN Counterterrorism Office, is in China at the invitation of Beijing and is due to visit Xinjiang's capital Urumqi, according to an email sent by his office to countries that raised concerns.

Western states are worried Voronkov's visit will validate China's justification for the centres, diplomats from the United States and several other countries, including Britain, also complained.

“The UN’s topmost counterterrorism official is putting at risk the UN’s reputation and credibility on counterterrorism and human rights by lending credence to these false claims,” the US State Department statement said.

China has been condemned internationally for setting up the detention complexes, which it describes as "education training centres" helping to stamp out extremism and give people new skills. 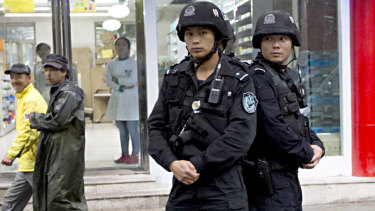 People walk past armed policemen standing guard near the site of an explosion in Urumqi, northwest China’s Xinjiang region.Credit:Andy Wong

"China will, and is, actively saying that what they're doing in Xinjiang is good terrorism prevention," said a UN Security Council diplomat, speaking on condition of anonymity.

"The visit by Voronkov validates their narrative that this is a counterterrorism issue, when we would see it more as a human rights issue," said the diplomat, adding that if Voronkov did not speak out after visiting Xinjiang then "silence could be seen as implicit acceptance, at worst UN complicity."

The email from Voronkov's office, seen by Reuters, said China planned the itinerary for Voronkov, whose office helps states implement a global counterterrorism strategy adopted by the UN General Assembly. The email said his office does "not expect any public statements" on his visit to Xinjiang.

He will be visiting Xinjiang before UN human rights chief Michelle Bachelet, who has repeatedly pushed China to grant the United Nations access to investigate reports of disappearances and arbitrary detentions, particularly of Muslims in Xinjiang.