Recent university graduates are twice as likely to be unemployed than other workers during the pandemic, according to new figures that shine a new light on how the pandemic is disproportionately affecting young people.

Those fresh out of university had an unemployment rate of 12 per cent in the third quarter of last year, compared to an already dire 5.1 per cent rate for the UK as a whole, the Office for National Statistics (ONS) revealed today.

But across all graduates, not just those fresh from university, the unemployment rate was lower than the UK-wide rate, showing older, better educated people are faring better.

It adds to the body of evidence that shows that young people are bearing the main brunt of job losses during the pandemic –  although recent graduates are doing better than young people without degrees, the ONS found.

Figures have already shown that younger workers experienced the largest decrease in employment and the largest increases in unemployment in the three months to July last year. 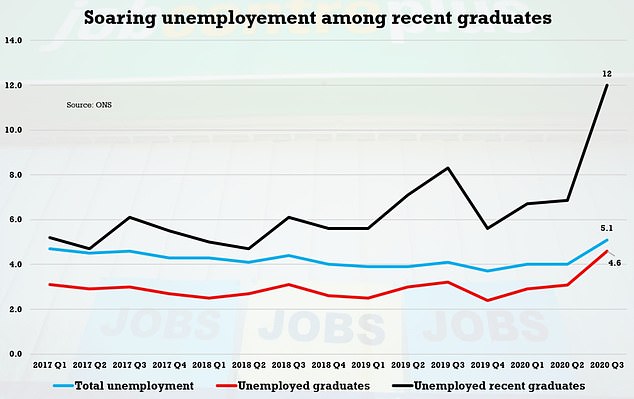 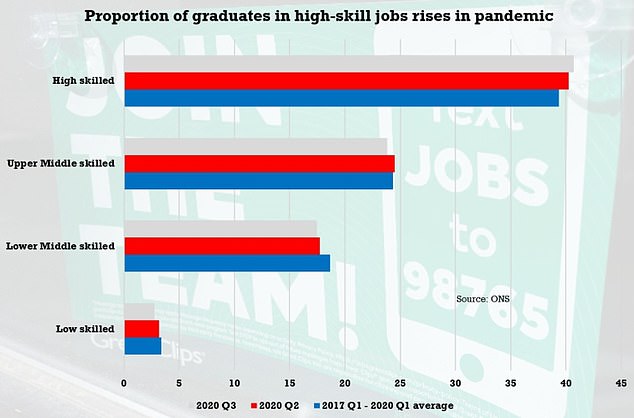 ‘However, average unemployment for recent graduates was the highest, averaging at 6.3 per cent over the period and reaching a peak of 12 per cent in Quarter 3 2020.

‘This suggests that recent graduates have been hardest hit by the pandemic in terms of unemployment.

Nevertheless, the unemployment rate for recent graduates remains below the non-seasonally adjusted youth unemployment rate (aged 16 to 24 years), which stood at 14.2 per cent and 13.6 per cent in Quarter 2 and Quarter 3 of 2020 respectively.’

While unemployment rates for recent graduates habitually rise in the third quarter – the period after graduation each year – the increase was markedly higher in 2020.

The ONS also found that the graduate ‘skill mismatch’ –  the proportion of degree-education worker sin jobs not requiring a degree  – fell by five percentage points to 25.5 per cent between Quarter 3 2019 and Quarter 3 2020.

One of the reasons that could be behind the fall is the horrific impact of the pandemic on the hospitality industry, which means graduates working in that sector of the economy are more likely to be out of work – along with non-graduates – than those in graduate-heavy industries.

Last week the ONS revealed ‘high vulnerability’ jobs in the hospitality sector were particularly at risk of reductions in hours and pay.

Waiters and waitresses saw a pay decrease of 10 per cent compared with 2019, with 77.3 per cent were furloughed.

In contrast, most professional occupations, which include healthcare specialists, teachers and accountants, fall into the ‘low vulnerability category’ and were less badly hit.

More than half (53 per cent) of those furloughed during the first lockdown last year  were in the high vulnerability group of jobs.

They include construction labourers, security guards or cleaners, and skilled trades occupations such as electricians, gardeners or tailors. These are less likely to be classes as key workers or be done from home, the ONS said.

Two-fifths (41.4 per cent) of jobs in the high vulnerability group saw pay reductions in the last year.

The majority of roles in this group are likely to be held by men, although women are the majority among the very worst paid, the ONS found. Some 72.3 per cent of occupations with median hourly wages below the low wage threshold were women.

Low paid jobs include cleaning, domestic or kitchen, and catering roles, which are mostly done by women.

And almost half of teenage workers are in the high vulnerability group.