Washington: The first in-person talks between top US and China officials since Joe Biden’s inauguration have gotten off to a fiery start, with America’s top diplomat warning his counterparts that China will create “a far more violent world” unless it respects global rules.

US Secretary of State Antony Blinken and US National Security Advisor Jake Sullivan made a point of abandoning traditional niceties by inviting TV cameras and reporters back into the meeting room to capture them trading barbs with their Chinese counterparts on Friday (AEDT). 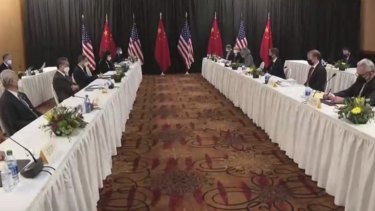 The US-China talks in Anchorage, Alaska.

The Chinese officials said it was hypocritical of the US to complain about China’s human rights record and accuse it of cyber espionage given the history of racism against African-Americans. They also accused the US of being a global “champion of cyber attacks”.

At the outset of the two-day summit in Anchorage, Alaska, Blinken said the US team will “discuss our deep concerns with actions by China, including in Xinjiang, Hong Kong, Taiwan, cyber attacks on the United States, economic coercion of our allies”.

“Each of these actions threaten the rules-based order that maintains global stability,” Blinken said.

“That’s why they’re not merely internal matters, and why we feel an obligation to raise these issues here today.” 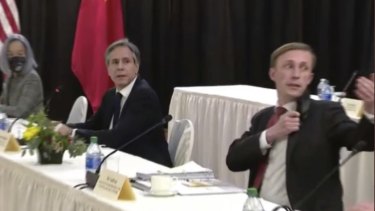 US National Security Advisor Jake Sullivan gesturing for cameras to remain in the room amid a heating exchange between the US and Chinese diplomats.

Before the meeting Kurt Campbell, Biden’s Indo-Pacific Co-ordinator, told The Sydney Morning Herald and The Age that a thaw in US-China tensions was contingent on China dropping its economic pressure campaign against Australia.

Blinken said the Biden administration is “committed to leading with diplomacy to advance the interests of the United States and to strengthen the rules-based international order”.

“The alternative to a rules-based order is a world in which might makes right and winners take all,” he said. “And that would be a far more violent and unstable world for all of us.”

Blinken, who has just returned from trips to Japan and South Korea, said other countries had raised concerns about China’s behaviour.

Sullivan said the US does not seek conflict with China but does “welcome stiff competition” with the rising superpower.

Top Chinese diplomat Yang Jiechi began the meeting by saying the US has a long history of human rights problems – including killing black Americans – and urged America to do better on human rights issues before lecturing other countries.

Sullivan shot back that America has tried to confront mistreatment of minorities rather than “trying to pretend they don’t exist”.

The “secret sauce of America” was its willingness to acknowledge its flaws and work to improve, he said.