Speaking to France24, the founder of Cogito Praxis Nicolas Dungan claimed Donald Trump has been adopting a Brexit-like tactic of “dividing and conquering” against the European Union on trade. Mr Dungan argued the US President’s “bashing” of Brussels will cause the Union to get stronger and exercise its “tremendous power” against the US. He warned: “All of the examples that have been given up to now in this debate has been of national leaders going to see Trump.

“But the EU has tremendous actual power of its own which it hasn’t really been exercising.

“So you’ve got Europe actually starting to flex its muscles as Europe, not as individual countries.

“Not as Orban, Salvini and the rest but as the European Union. 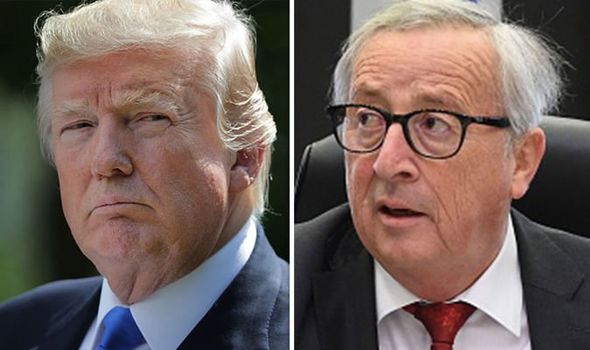 “So he’s trying to do what people try to do with Brexit, which is divide and conquer.

“And the more the Europeans are threatened that way, I think the more likely they are to stick together.”

It comes as the US President took aim at Mario Draghi in a furious tweet accusing the European Central Bank of plotting to spark unfair competition against the United States after he revealed the ECB was ready to ease policy if the inflation outlook fails to improve.

President Trump said: “Mario Draghi just announced more stimulus could come, which immediately dropped the Euro against the Dollar, making it unfairly easier for them to compete against the USA.

“They have been getting away with this for years, along with China and others.”

Mr Draghi said the ECB will need to use additional stimulus if inflation does not head back to its target of 2.0 percent.

He said: “In the absence of improvement, such that the sustained return of inflation to our aim is threatened, additional stimulus will be required.

“That aim is symmetric, which means that, if we are to deliver that value of inflation in the medium term, inflation has to be above that level at some time in the future.”