Lawton, Oklahoma: The US government has chosen a military base in Oklahoma as the location for a new temporary shelter to house migrant children and is considering a customs port in southern New Mexico as another option as existing shelters are overwhelmed. 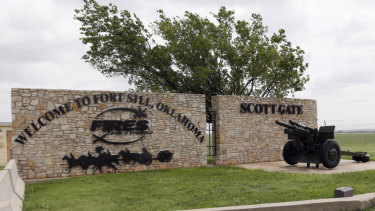 The Office of Refugee Resettlement said on Tuesday it's dealing with a dramatic spike in the number of children crossing the border without parents. The agency already has received referrals for nearly 41,000 kids so far this fiscal year, marking an increase of almost 57 per cent over the same period last year.

The facility at Fort Sill near Lawton, Oklahoma, would be capable of holding 1400 kids. Fort Sill served as a temporary emergency shelter for unaccompanied children in 2014 as a result of a migration surge at that time.

That's in addition to the shelter announced just last week in Carrizo Springs, Texas, where as many as 1600 teens could be held in a complex on government leased land near the US-Mexico border.

Bases in Georgia and Montana were passed over, but officials also are weighing the possibility of establishing an emergency shelter at New Mexico's Santa Teresa port of entry that could take in children if there was an urgent need for more bed space. 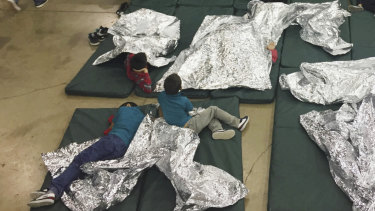 People who have been taken into custody related to cases of illegal entry into the United States, rest in one of the cages at a facility in McAllen, Texas. Credit:AP

Federal officials said they were notifying state and local leaders in New Mexico that an assessment would be done. A final decision on whether that site would work was expected soon.

Under fire for the death of two children who went through the agency's network of shelters and facing lawsuits over the treatment of teens in its care, the Office of Refugee Resettlement has said it must set up new facilities to accommodate new arrivals or risk running out of beds.

Record numbers of unaccompanied children have been arriving at the border, largely from Guatemala, Honduras and El Salvador. In May, border agents apprehended 11,507 children travelling alone.

The announcement of plans to expand bed space for the children follows the government's decision to scale back or cut paying for recreation, English- language courses and legal services for the more than 13,200 migrant toddlers, school-age children and teens in its custody.

The Health and Human Services department, which oversees the refugee office, recently notified shelters around the country that it was not going to reimburse them for teachers' pay, legal services or recreational equipment, saying budget cuts were needed.