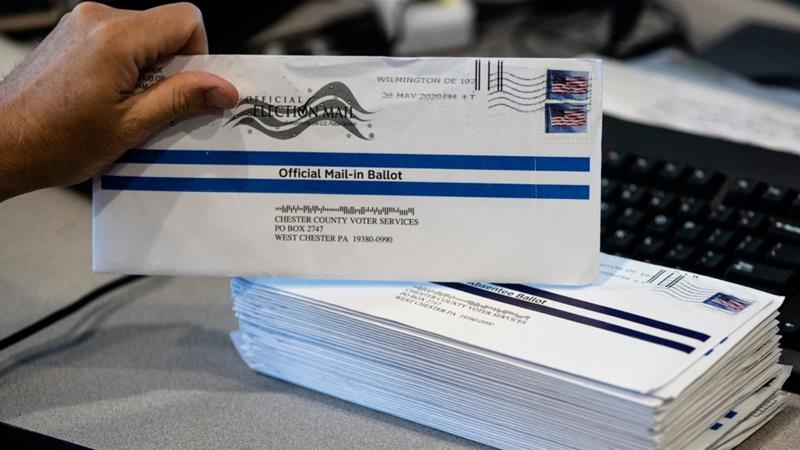 With less than 90 days until election day, Republicans are scrambling to counter the effects of United States President Donald Trump’s verbal war on mail ballots amid growing evidence that it has helped Democrats heading into the crucial November 3 contest.

The US president’s unsubstantiated attacks on mail voting as vulnerable to fraud have soured many of his supporters on this alternative to in-person balloting as coronavirus sweeps the country, more than two dozen Republican officials from six politically competitive states told Reuters news agency.

Democratic voters, meanwhile, are embracing mail ballots at rates well ahead of their Republican counterparts, according to data from recent state and local elections.

The trend has alarmed them, the Republican officials said. They worry Democrats will bank significantly more mail votes by November, a deficit that may be tough to overcome if the pandemic depresses turnout on election day.

Fearful of losing the White House and getting thumped in down-ballot races, party operatives are quietly taking matters into their own hands. Local Republican candidates are recording phone messages promoting mail balloting as safe and reliable, officials said, while volunteer door knockers have memorised talking points to persuade sceptical voters that their state’s system is fraud-proof.

“There is a real concern that [Trump’s actions] will end up suppressing the Republican vote,” said Amy Koch, a Republican strategist in Minnesota who is working on several races there. “We are trying to tell voters that mail voting here in Minnesota has safeguards, but I worry that Trump has the biggest megaphone and can blow the whole thing up.”

The Trump campaign would not comment specifically on the assertion of Koch and other Republican officials that the president is undermining turnout efforts. Campaign spokeswoman Thea McDonald said, “President Trump has consistently and rightly said that where a voter cannot make it to the polls, they should request an absentee ballot.”

Knowing that many of the president’s supporters trust only what he says, the party has taken to using Trump’s own words to tout mail-in voting. In key battleground states, including Michigan, North Carolina and Pennsylvania, officials last month sent fliers to millions of Republican voters urging them to request absentee ballots for November’s election.

The mailers featured part of a Trump tweet from June 28: “Absentee Ballots are fine because you have to go through a precise process to get your voting privilege.”

But it obscured the remainder of that message: “Not so with Mail-Ins. Rigged Election!!! 20% fraudulent ballots?”, according to a copy of the mailer seen by Reuters whose content was confirmed by the Republican National Committee.

“We are doing our best to inform people that North Carolina has important safeguards. Some don’t want to hear it,” Hellwig said. “The question is will these same people show up on election day if we are still seeing a surge in coronavirus cases. We have certainly made our bed in this.”

08/07/2020 World News Comments Off on US: Trump's attacks on mail-in votes could cost Republicans
Recent Posts
We and our partners use cookies on this site to improve our service, perform analytics, personalize advertising, measure advertising performance, and remember website preferences.Ok